I first stumbled onto Sepia Mutiny as a college student, a confused but curious 2nd genner who had never had brown friends, fresh from my first trip ever to the desh and desperate to find more out more information about the a CD I had bought by some “Rabbi” with a guitar. This was the first result, and after a few more inquisitive clicks around the site, I was addicted and would never be the same again. This was IT, the in I had been looking for but had been denied for so long. Though it seem silly now, my first real desi friends would be those I met online. I was a Mutineer, and I had a mission.

Despite admitting to have shot and killed a 17 year-old armed with Skittles and a hoodie, George Zimmerman remains a free man today. The story struck a chord and has become a worldwide sensation. Just as thousands of ordinary folks of all stripes have taken to the streets to peacefully protest the outrageous impunity, a similar scene is happening right now in Punjab; the difference is that the “criminal” is slated to die for attempting to stop the targeting of his community for extrajudicial torture and killings. Here is the breakdown on Balwant Rajaona and why he was to be hanged from The Langar Hall.

On March 31st, Bhai Balwant Singh Rajoana [was] set to be executed in Punjab for his involvement in the assassination of former chief minister of Punjab, Beant Singh. Chief minister Beant Singh was involved with carrying out brutal and mass killings of Sikhs in Punjab.  He is widely held responsible by many Sikhs for ordering the kidnap, torture and death of many young Sikh men.  A report by Amnesty International can be found here.

END_OF_DOCUMENT_TOKEN_TO_BE_REPLACED

Ahoy-hoy, Mutineers!
Although it’s been a while, I’m taking a cue from Vinod and am holding the sentimentality for a moment, namely to revisit one of the most Mutinous Musicians Sepia has showcased: the inimitable Bhi Bhiman. Since Bhi was first broken to the desi masses, he has gone, well, viral. Not only has he managed to drop another amazing album, but Bhi has been profiled by such journalistic stalwarts as NPR, HuffPo, PopMatters, and that old rag, The New York Times. All of this without losing what makes him special: that astoundingly soulful and smokey set of pipes that fit his socially aware but catchy folk melodies quite nicely.
As promised, here is the long-awaited interview with the fabulous Bhi Bhiman, culled from email and conversation over a wonderful lunch at San Francisco’s now shuttered Pot de Pho.

Check out his video for “Guttersnipe,” his sultry voice set along a snapshot of “life along the Indian railways,” after the jump.

END_OF_DOCUMENT_TOKEN_TO_BE_REPLACED 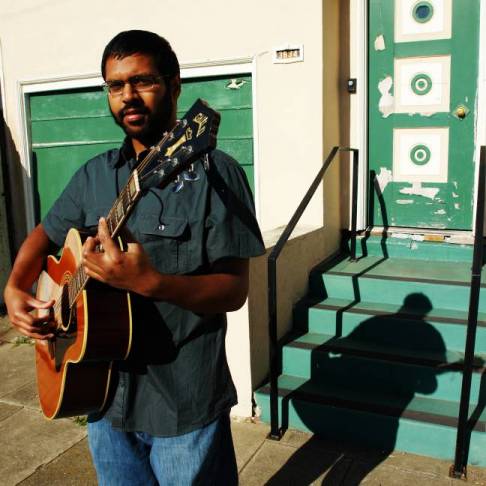 Aside from the questionably colorist “very un-white” comment, I could not have said it better myself. Bhi is a star in the making. He’s the closest we have to a brown Randy Newman (except topical and funny) and/or a brown Bob Dylan (except modest and intelligible). Just like Abhi made the bold prediction that Das Racist would be the hottest, brownest thing of 2009, I’m sayin’ that Bhi is going to do to wannabe fakers just like the release of Nevermind did to 80’s butt-rock: render them irrelevant with the strumming of a single chord. END_OF_DOCUMENT_TOKEN_TO_BE_REPLACED

I have a lot of records.

Not more than the KGB of course, (that nonsensical distinction is for MIA alone to lay claim to) but enough to have seriously impacted my pocketbook, personal life, and also to provide me with an escape when pressures of living with wackily overbearing desi parents prove to be a bit much.

I started collecting in 2000, a year before the first generation iPod was first released (partially designed by my friend’s dad while we were still in high school, no less). Since then, I’ve accumulated probably close to 1000 records but, to this day, my audiophilia never translated into me owning an iPod or any other personal mp3 player. The reason is simple- those devices offer the exact opposite experience to that of the LP. The record is a tactile medium and it is almost not possible for the music to be seen and felt as much as heard, a reality totally lost with the iPod. The mp3 player certainly provides incredible convenience and portability for those who want hours of tunes at their disposal without a wheel-barrow to schlep it around in, but I’ve found that it deracinates and decontextualizes the music from the interesting history and processes that helped created it. It’s in the spirit of this obsessive nerdery that I came across, via reading the miscellanea on my record sleeves, the subjects of tonight’s post and the nuggets I’ll be sharing every Friday with all ye Mutiny Faithful.

Pensive after reading Anna’s tribute to Michael Jackson last month, I remembered that I had seen something completely unexpected while scanning the sleeve of his single for The Way You Make Me Feel: the familiar “P-word.” I knew I was onto something big. END_OF_DOCUMENT_TOKEN_TO_BE_REPLACED

This week’s nugget is a soon-to-be-legendary gem of a track that I’ve spent over 3 years trying to dig up before finally tracking down a copy in a warehouse in Delhi. It was mine (and mine alone!) to enjoy until I foolishly informed Manish of this magical slice of audio heaven at a party last March. I guess if I’m going to have to share it with him, I might as well introduce you guys to your new favorite summer jam.

What was that insufferable science-fiction movie that came out a few years ago, set in an improbable parallel universe where a wisecracking 16 year-old could simultaneously make superfluous references to Soupy Sales and nonchalantly decide the future of her unplanned fetus all in the same hamburger-phone call? It doesn’t matter, as the only interesting part of that unbearable film was the unearthing, for the masses, of Sonic Youth’s cover of Superstar. Eerie, with equal parts irony and insanity, the Thurston Moore-led reworking revived interest in the track that helped define the careers of both Bette Midler and The Carpenters and introduced his art-rock band for another generation of smarmy hipsters. Now, imagine the inevitable Bollywood remake and that scene, where little Jaanu slow dances with the Uncleji vying for the child inside her womb- what uberhip, obscure cover song by a brown artist could match Superstar’s cool cred and lilt ominously from the record player? Glad you asked. END_OF_DOCUMENT_TOKEN_TO_BE_REPLACED

The ad said “Micropaleontologist seeks DJ for digging up the brownest, crustiest nuggets this side of a Pompeii port-a-potty. Ask for Abhi.” (You’ll never use Craigslist again.)

“You Sukhdeep?” he snorts.

“Sometimes,” you quip. He doesn’t get the reference. Smiling, you enter.