I have a lot of records.

Not more than the KGB of course, (that nonsensical distinction is for MIA alone to lay claim to) but enough to have seriously impacted my pocketbook, personal life, and also to provide me with an escape when pressures of living with wackily overbearing desi parents prove to be a bit much.

I started collecting in 2000, a year before the first generation iPod was first released (partially designed by my friend’s dad while we were still in high school, no less). Since then, I’ve accumulated probably close to 1000 records but, to this day, my audiophilia never translated into me owning an iPod or any other personal mp3 player. The reason is simple- those devices offer the exact opposite experience to that of the LP. The record is a tactile medium and it is almost not possible for the music to be seen and felt as much as heard, a reality totally lost with the iPod. The mp3 player certainly provides incredible convenience and portability for those who want hours of tunes at their disposal without a wheel-barrow to schlep it around in, but I’ve found that it deracinates and decontextualizes the music from the interesting history and processes that helped created it. It’s in the spirit of this obsessive nerdery that I came across, via reading the miscellanea on my record sleeves, the subjects of tonight’s post and the nuggets I’ll be sharing every Friday with all ye Mutiny Faithful.

Pensive after reading Anna’s tribute to Michael Jackson last month, I remembered that I had seen something completely unexpected while scanning the sleeve of his single for The Way You Make Me Feel: the familiar “P-word.” I knew I was onto something big. 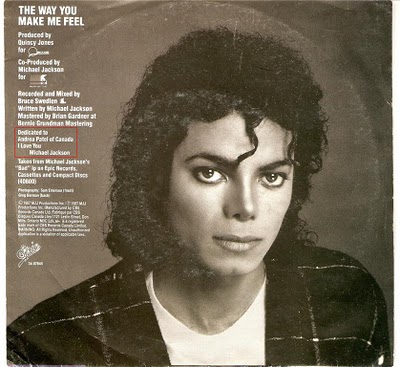 Whoa. Who is Andrea Patel and how did she get Michael Jackson to dedicate a record to her? Did MJ owe a favor to a kind motel owner who put him and his stranded crew up one rainy night during their 1987 tour?

Maybe Andrea was the artistic genius behind Indian Thriller and Michael wanted to convey his appreciation? Or perhaps she was his secret Bollywood Princess, proving once and for all that the King of Pop was really desi (and straight) after all. If so, did he really love her? Did she love him? With a bit of determination, moxie, good old-fashioned police work and Google (actually, just Google) I found the answer to the mystery of the Perplexing Patel Paean. In her own words:

My name is Andrea Patel. When I was 6 years old I met Michael Jackson here in Toronto and he personally invited my family to his concert. Soon after he would phone us, and send us boxes of stickers/gum.Then to top it off he dedicated the single ‘The way you Make me Feel’ to me. Dedicated to Andrea Patel of Canada, I love you. It’s something I have neverbeen able to live down, even if I try. People are always fascinated by this and refer to him as my best bud even though I don’t talk to him anymore. It truly was 15 minutes of fame!

Her father, Nazir Patel, surprisingly has a quite the active internet social life and is on Twitter (add him!) and has a blog. He explains how Michael met his family and even provides us with pictures, including one of Michael with Andrea. 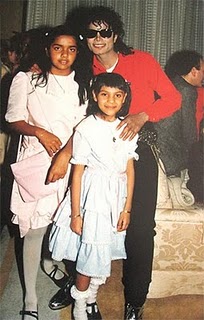 we had the good fortune of knowing between October 1984 until Mar 1988. A great human being who always spoke well of other celebrities whenever we spoke on phone during the years he kept in touch.It was Oct 1984 when he called us at The Four Seasons Hotel in Toronto in response to a fan letter I wrote on behalf of our daughter Andrea aged 3 and a letter that I was able to get through his father whom I met outside the hotel walking on the street. Thereafter he invited us to his Victory Tour concert as VIP guests. And started a friendship that would have him call many times. In Nov 87 he dedicated a single The Way You Make Me Feel to our daughter Andrea 7 and then invited us to a Bad concert reception in New York in March 1988. Thereafter I received a large size photo of me with him in April. Unfortunately we never heard from him once he fired his manager at the time Frank Dileo.

Along with Nisha Kataria and Omer Bhatti, Andrea bring the tally of questionable-relationships-that-Michael-Jackson-had-with-a-desi-child to at least three. (Yeah, I’m keeping score. Please leave a comment if you are another one.)

Since I don’t want to leave without a track for your weekend playlist, check out this off-the-wall Hindi cover of one of MJ’s biggest hits.

The 12 inch of Bollywood Freak’s remix of a now legendary cover of “Don’t Stop Til You Get Enough” surprisingly didn’t get the Sepia bump when it mysteriously appeared back in 2004, but it did manage to attract the attention of two limber and effusive brown dudes with a video camera and a free weekend.

The track was first released as “Chhupke Kaun Aya” in 1981 by Southie songstress Usha Uthup on her rare album “24 Carats,” a strange collection of Hindi versions of American disco songs. The songs are almost note-for-note recreations, but the lyrical content is a subcontinent away: the Bee Gee’s “Night’s on Broadway” became “Aaj Sanam Mujhe” and Gloria Gaynor’s classic “I Will Survive” somehow translated into “Lelo Dil Mera.” I had to travel all the way to Delhi before I found a copy at the last record store on my list. The original has found it’s way into almost every set I’ve played for the past two years.

I may not own an iPod, but if you do, I hope Chhupke gets at least one play this weekend from you macacas, including those limber ones with video camera.