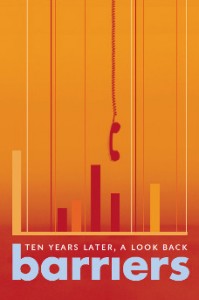 Barriers is the story of a family that lost a son in the tragedy of September 11, 2001. This theatrical production is by Desipina & Company, which also brought us seven years of Seven.11 Convenience Theater. At the Wall Street Journal, Aarti Virani takes a closer look at the inspiration behind Barriers, which was first performed in 2002, and is currently playing through September 18 in Manhattan.

Just days after the 9/11 attacks, playwright Rehana Lew Mirza was heartbroken by what she encountered while walking in New York City. “I saw a flyer of a missing South Asian woman with holes burnt into the eyes and mouth,” she said. It was a seminal moment for the young artist and one that inspired her to pen “Barriers,” a raw look at the struggle of a Pakistani-Chinese family who suffered loss in the 9/11 tragedy. (WSJ)

The play features actors Sunkrish Bala and Pooja Kumar. Playwright Mirza and her sister co-founded Desipina as a fusion arts company focusing in film and theater, dedicated to promoting cross-pollinations of artistic, political, and cultural dialogues.

For Ms. Mirza, the latest production of Barriers is an attempt to untangle the many conflicting narratives that often present themselves as authoritative accounts of 9/11. She draws on her own mixed heritage – Filipino and Pakistani – to portray a multicultural family. “New York has become a political minefield,” she said, referring to the controversy surrounding the construction of an Islamic community center in Lower Manhattan. “The stories that came out of 9/11 were extremely political but, really, it was a very human moment in our country’s history.” The script stands out for the humanness she’s infused it with, like the strained interaction between Naima and Khalil, the mourning parents of Nabhil, a victim of the attacks, and the poignant outbursts from their daughter Sunima. (WSJ)