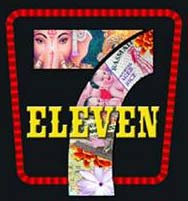 Desipina is again hosting its low-rent, highwire theater collection Seven.11 in Manhattan, and Anuvab Pal is contributing a new piece called Paris. The schtick is that playwrights of all colors contribute seven tales of 11 minutes each, all set in convenience stores. It sounds much like 11.9.01: September 11, a collection of short films 11 minutes, nine seconds and one frame long by filmmakers including Mira Nair, Sean Penn, Alejandro Gonzalez Inarritu (Amores Perros), Samira Makhmalbaf and Youssef Chahine.

As far as creative gimmicks go, this is a good one: even the Manhattan Project found creative benefit in time constraints, although nuclear incineration has been known to be motivating. This is the third year of Seven.11, so it’s clearly a successful franchise. The quick-witted Lethia Nall, who was so good in Alter Ego’s production of Tom Stoppard’s Indian Ink, appears in both Paris and Soonderella.

Anuvab Pal’s PARIS: Paris is a play about an 11 minute conversation without consequence on a lazy Paris afternoon…

Samrat Chakrabarti/Sanjiv Jhaveri’s new musical SOONDERELLA: a fairy tale of a different colour… The only way to follow up with last year’s wildly successful A Very Desi Christmas, a pop musical adaptation of Scrooge, is with another 11-minute musical set in the convenience store…

It’s also a clear demarcation between Right and Left Coast desi stereotypes; the Left Coast analogue would be 80 tales of 86 engineers, but who’d go see it? Bugaboo and nerdcore call my bluff.