For me, watching Seven.11 was one of the theater highlights of 2005. 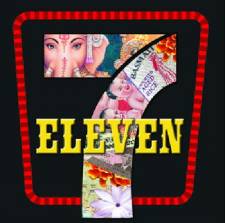 It had the sharpest writing and the funniest set of desi and As-Am in-jokes I’ve seen in ages: custom-fit culture in a railroad apartment. The proprietors have done well for themselves behind the counter, unveiling a bigger show in a bigger theater this year:

This year’s line-up includes a kung-fu hustler, run-away teenagers, convenience store surprise reunions, a futuristic free-for-all for Manhattan, and not one but TWO original pop musicals, one of which leaves you questioning, “Who really did kill Mr. Naidu?”

If you’re anywhere new New York between March 30 and April 16, you have to see the musical farce, last year’s was side-splitting. The show’s creative constraint is a gimmick, but it works:

… Seven.11 Convenience Theatre marks its fourth year with a whole new set of seven plays [of 11 minutes each] all set in a convenience store…

The intense, bald and talented Andrew Guilarte returns from last year’s cast. Looking at the list is like watching a star team shed your favorite players (where have you gone, Joe Debarggio, and Lethia Nall, Kavi Ladnier, Anuvab Pal?). You hope the new faces will once again become sentimental favorites.

They were completely sold out last year, so buy ahead.