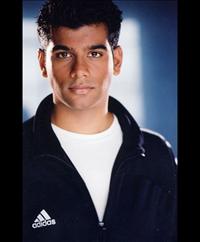 Sunkrish Bala will appear on Will & Grace tonight and Grey’s Anatomy on Sunday (thanks, Kiran):

Sunkrish Bala will be appearing on TV during Thanksgiving weekend. Look for him on “WILL and GRACE”– Thursday, Nov. 24th, 8:30PM on NBC and on “GREY`S ANATOMY”– Sunday, Nov. 27th, 10PM on ABC. These are guest starring roles and will likely feature him prominently. [Link]

He’s previously been on CSI:NY and My Name is Earl. He had a part in Desipina’s production of Barriers and played Rama in an adaptation of the Ramayana:

There is a silly but funny scene in which Rama tells Lakshman of their need to forge an alliance with the monkey kingdom. “Uh, I don’t think they like to be called that,” Rama’s brother delicately points out. There follows an argument about the socially sensitive term to use (Vanaras), although, Rama complains, he can’t keep up with all these self-descriptions — “Why can’t they pick one name and stick with it?” And later, when he hears the Vanaras actually calling themselves “monkeys,” Lakshman points out that “It’s all right for them to call each other that…” [Link]

Romantic lead, maybe? Going from cabbie to Latin lover, exoticized though it might be, would be one step up in the reductionist sitcom pecking order.