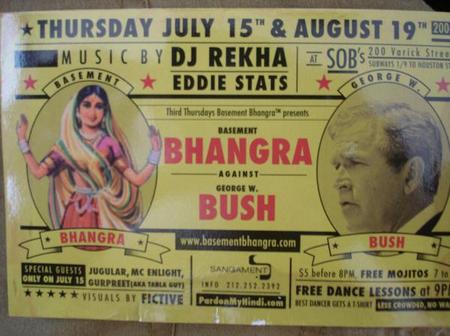 I’ve been obsessed lately with political posters. Particularly artwork depicting struggles of the Desi diaspora. So obsessed that I created Mutinous Mindstate on tumblr to curate the various important images and artwork I’ve come across over the years. In fact, it was DJ Rekha that first responded to my tweet asking for Desi political art with an image of PardonMyHIndi designed event poster for Basement Bhangra Against Bush in 2004.

Along very similar vein, DJ Rekha is also involved with an art show that premiered in New York City this month at 92YTribeca. The Soho Road to Punjab is an exhibit inspired by bhangra music and has exhibited overseas in the UK over the past few years. This NYC-angled exhibit, title Five Rivers to Five Boroughs, is the first time the exhibit will be shown in the U.S.

The exhibit’s story refers to the impact New York has had on the spread of Bhangra. Brooklyn-based DJ Rekha, a musician and curator, named Ambassador of Bhangra by the New York Times, shares her personal collection of material for the New York version of this project. [facebook] END_OF_DOCUMENT_TOKEN_TO_BE_REPLACED

I love this video. Pakistani dude sounds completely befuddled at how uncomfortable demonstrations can be…

I hear ya, bro. Find yourself some Limca paani [lemon-soda] and get back to it! END_OF_DOCUMENT_TOKEN_TO_BE_REPLACED 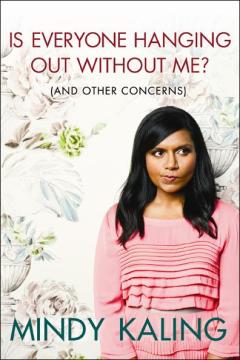 Yesterday I was going to change up my commute to pass by a bookstore, so that I could check out Is Everyone Hanging Out Without Me? (And Other Concerns) by Mindy Kaling. Tweeps and blogs like SNL, Vulture, Splitsider and ShelfLife were agog over the cuteness of her floral, pink-sweatered, wry-mouthed book cover. Given her writing background and popularity as a tweeter, I imagined that physically flipping through a copy would offer some kind of quirky comedy contact high. END_OF_DOCUMENT_TOKEN_TO_BE_REPLACED 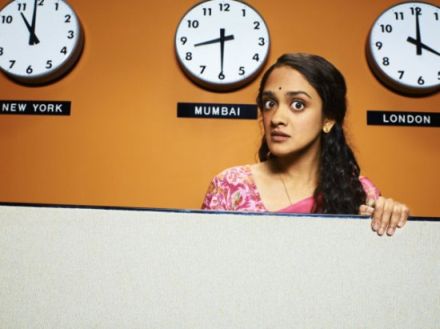 Lizardi says she’s one of the “five South Asian writers on the show telling stories that often come straight from our personal experiences.” Her credentials include living in Mumbai where she helped her husband run a call center, and she shares a couple of examples of those straight-from-personal-experience story lines. END_OF_DOCUMENT_TOKEN_TO_BE_REPLACED

I’ve been consistently impressed with Penn Masala, University’s of Pennsylvania all-male a cappella group. Instead of sitting on the laurels of their success as the nation’s first South Asian a cappella group, they keep training the next generation of students to continue the Penn Masala tradition. While other collegiate South Asian a capella groups have started and fizzled out, Penn Masala has continued producing fresh, innovative albums. So obviously, I’m super excited about Panoramic, their seventh studio album, which comes out this month. Today the group released “Heartless/Kabhi Kabhi,” a song from Panoramic, on a student blog. Enjoy, mutineers! And while you’re at it, tell me a few of your favorite South Asian a capella groups. Is it the University of Michigan’s Maize Mirchi? Stanford’s Raagapella?Northwestern’s Brown Sugar? I need some new music.

END_OF_DOCUMENT_TOKEN_TO_BE_REPLACED

I can’t say I’m always the most confident Urdu speaker. When my mother’s younger siblings came from Pakistan a few years ago,with a slew of adorable baby cousins (okay, it was three), I was happy to once again immerse myself in the language. But nowadays it’s rare that I have the chance to practice Urdu, which is why this video made me giggle. Two girls decide they want to order Indian food — but in Hindi. So of course they turn to the Interwebs for help. Because on the Internet, nobody knows you’re brown. Using Google Translate, they successfully order themselves some takeout. I like the part at the end where the dude on the phone is like, “Will there be anything else?” And the girls just keep “saying” the address instead.

END_OF_DOCUMENT_TOKEN_TO_BE_REPLACED

About a month ago I put up my first post on this weblog. I argued that South Asians have been genetically undersampled, which is rather alarming considering that Indians, Pakistanis, Bangladeshis, Nepalis, Sri Lankans, etc., are 1/6th of humanity. The alarming part is that understanding population genetic structure is considered a prior condition of much medical genetic research. Without taking into account genetic relatedness one can not usefully establish correlations between particular variants and particular diseases or traits. For example, it is well known that South Asians have a high risk for diabetes, but the possible risk variation within this genetically diverse group has barely been addressed (there is some data which indicate that Bengalis and South Indians are at more risk than Punjabis). END_OF_DOCUMENT_TOKEN_TO_BE_REPLACED

Well. I’ve been convinced. Now I have to go. A parody of the King’s Speech, the above clip features friends Pia Shah, Sunil Malhotra, and my buddy Rasika Mathur. And of course I’ll be at the film festival – The Taqwacores Motion Picture is screening, finally, in the Bay Area.

I was curious. What are these films on the list that called for Pia, Rasika and Sunil to create the above video? These are the South Asian-ish featured filums at this year’s festiwal:

From the Gala Presentations we have Upaj and the sequel to East is East, the new movie out of the UK West is West.

Under Special Presentations we have the classic Bend It Like Beckham and the abysmal It’s a Wonderful Afterlife. END_OF_DOCUMENT_TOKEN_TO_BE_REPLACED 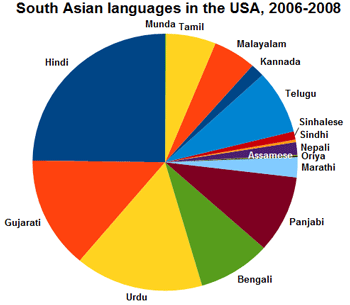 A few days ago Taz pointed me to the fact that Census 2010 had been releasing a lot more data in the past few months. I was naturally curious, so I decided to check out the website. Mind you, I’m someone rather familiar with the older website, and have downloaded raw data sets and crunched them with R. So I was cautiously optimistic. Very cautiously. Apparently the big news is that the American Factfinder now has a “web 2.0″ version which will be releasing 2010 count data. Unfortunately, the implementation of AJAX makes the site very, very, slow (and beware of non-supported browsers!). And, there isn’t that much 2010 information.

To review, there are decennial censuses which are straightforward counts, and, since the aughts there have been American Community Survey results which are based on a sample, and so have a margin of error (this makes county-level data less useful because for small subpopulations within a county the margin of error can be very large). I’m looking forward to 2010 results because they are going to be much more robust than the ACS data which makes the news periodically for small subgroups. You can see where I’m going with this, since the core readership of this weblog comes from a group which is itself subdivided by nationality, ethnicity, class, and religion.

Though the initial intent was to find 2010 results for Indian Americans which I could compare across the older censuses, I stumbled onto some interesting language data. The pie chart is based on 2006-2008 ACS data. I’ve put a csv file of the data online. For the pie chart I removed some languages with less than 1,000 claimed speakers. The original data can be found here. The sample was limited to those aged 5 and over. If these data are correct ~2.25 million Americans spoke indigenous South Asian languages at home in the second half of the aughts. END_OF_DOCUMENT_TOKEN_TO_BE_REPLACED

Social media is all a flurry this morning letting me know that it is the 100 year anniversary to International Women’s Day. Only 100 years? Feels like we should have been honoring women since the dawn of time.

To celebrate the day, I wanted to post an iconic image that some of you may recognize from 1971 of the Mukti Bahini women of Bangladesh. I dedicate this post and this image to all the mothers, grandmothers and great-grandmothers out there, all fighters in their own revolutionary way.

Let’s have a go around of “Caption This”, shall we? Let’s keep it a celebratory post, please. And if anyone has another image or link to a website to honor International Women’s Day, please share it in the comments – I’d love to hear and see stories and images that pull you on this important day. END_OF_DOCUMENT_TOKEN_TO_BE_REPLACED