I was listening to a new NPR series not so long ago: The Hidden World of Girls. That particular episode featured Nigerian novelist Chris Abani’s childhood memory of touring the Nigerian countryside with his mother, Daphne Mae Hunt:

My mother became certified as a Billings Ovulation teacher. And her job was to go and teach this to women. … Part of the problem was that her Igbo wasn’t good enough to discuss people’s uterus. She needed an interpreter and mother decided to ask me to interpret for her. I was eight years old. So we would set off, the two of us, and I would have a backpack. … We would go door to door. Everything starts with a greeting … It would be followed by an apology from me because I was about to discuss something sacred, taboo. 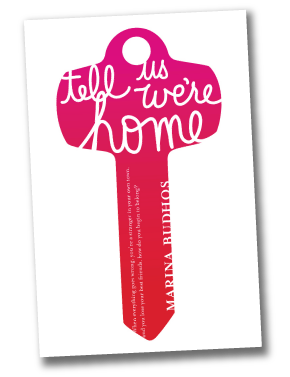 These women would never discuss [their period] with their husbands and here’s this eight-year-old boy … [See full transcript.]

The image of a young boy accompanying his mother to strangers’ homes and acting as a middleman stayed with me for several days, and when I recently heard Marina Budhos reading from her new, terrific young adult novel Tell Us We’re Home, I was reminded of it again.

In Budhos’s novel, we meet three young girls, Jaya, Lola, and Maria, all immigrants, who find themselves in a different kind of countryside than Abani — American suburbia — where they act as their mothers’ interpreters and translators.

Their mothers are nannies and housekeepers in Meadowbrook, a picturesque New Jersey town off the commuter rail, and these girls are the invisible teens who help their parents navigate a new culture while struggling to find their own place within it. They go to school with the same kids whose families their mothers work for.

Jaya is West Indian, from Guyana. She assumes the responsibility to help absolve her mother of the accusation of a theft that in her employer’s home. Maria is Mexican. She accompanies her mother on job interviews and acts as a conduit for her employment searches. And Lola is a Slovakian self-appointed revolutionary whose mother is a housekeeper at her classmate’s home and whose father is a depressed former engineer. Each girl’s story–and the story of their friendship–allows us to peer into the hidden world of working class immigrants. Until they meet, each girl lives in a lonely bubble of invisibility, but chance brings them together and their friendship saves each of them in some way. Though they are outsiders, they are outsiders together.

I was a fan of Budhos’s first YA novel, Ask Me No Questions, and am glad that this book more than lived up to my expectations. Even if you’re not one of those keen readers drawn to nanny novels, there are a few good reasons to pick up this one.Reason 1: It’s a vivid and layered portrayal of contemporary suburban life. Budhos brings alive the town and many characters of Meadowbrook without making her narrative mucky or over-complicated.

Meadowbrook, New Jersey, looks like it’s right out of an old-time postcard. It has a big town hall, with huge columns and a neat border of red tulips. There’s a quaint little Main Street, its wrought-iron lampposts twined with evergreen sprigs at Christmas; a big green park, where the kids trace ice-skating loops on the frozen pond.

The town is nestled in a valley, and on one side is a steep incline that thrusts up into the ravine, where some of the expensive modern houses are perched like wood and glass boxes. On the other side the larger homes slowly give way to two-family houses and apartments on gritty Haley Avenue and to the big box stores of Route 12. More and more, shiny new condos have sprung up in the open gaps of land, a grove of pale brick McMansions standing where an old horse stable used to be.

Halfway up the hill, in the old section of town, is Mrs. Abigail Harmon’s house. It isn’t much of a house, as far as Meadowbrook houses go. More it’s a cottage, with a steep gabled roof and low exposed beams. The garden is a froth of eccentric tastes: pinwheels and tangled raspberry bushes, a crumbling slate wall and herb garden with chipped zigzagging paths. Mrs. Harmon inherited the place from her mother, who’d been born in the pink-wallpaper nursery, and whose grandfather once owned the hundred acres of farmland that makes up what is Meadowbrook today.

Around the time Mrs. Harmon was born, her family’s apple orchard was sold off to build the train station. Nowadays, when the early train draws up, a stream of women, mostly from the Caribbean or Latin America, step down in their rubber-soled shoes, cradling their Dunkin’ Donuts coffees, and make their way to the pretty clapboard houses. A few minutes later, up and down the streets, comes a chiming of voices, good-byes, slammed doors, cars backing down driveways, mothers and fathers rushing across town with their briefcases and still-wet hair to catch the next train to the city.

Reason 2: It’s timely. Budhos digs into class and ethnic dynamics that are quietly bubbling and brewing trouble in communities all over the country and informing the current immigration debate. One of the subplots is about the tensions between immigrants, including day laborers, and rooted, homogeneous communities who find themselves threatened.

” I’m Genine. …” Without asking, she slid into the chair opposite Maria. The girl was a study in black: worn messenger bag stretched across a faded black T-shirt with a silk screen image of Che Guevera … “So I heard about some stuff going down at the park. What’s up with your cousin and the other guys?”

“There’s a lot of talk in town. People are saying they should ban those guys who stand on the corner. Even crazy stuff. Ticket the soccer players if they don’t live here. Put a cap on how many renters there can be in town. Get rid of the ELL classes in the schools.”

A nauseous surge rolled through Maria. She hated this. More trouble.

Reason 3: It’s my one of my favorite kinds of love story–it depicts the complex and beautiful bond of friendship that can form between adolescent girls who are struggling to fit in (something that many of us can well identify with).

Being the daughter of a maid or nanny, it wasn’t like everyone was so bad or mean or stupid. It was just weird. You knew your mother put extra bleach in the underwear of some girl who was walking up the aisle at assembly in her best corduroy jumper dress. Or those shoes you wore were hand-me-downs from the kid in the grade above you, and you just prayed she didn’t notice. Or how you hated Monday mornings, when half the class came in sporting sweatshirts with big letters that said I ROCKED AT JONAH’S BAR MITZVAH! Which of course you were never invited to.

That’s why it was so amazing that the three girls found each other. It was a kind of miracle. … In the beginning they laughed hard, swapping stories and hurts, amazed there could be anyone else who understood. … The best part, though, was the bits of advice the three of them would share. Lying about what you were doing for spring break, or making up a story about scoliosis, which is why you couldn’t go on the school ski trip, which cost too much.

Before I give too much of the plot away, let me leave you with this video of Marina Budhos reflecting on her inspiration for this book.

On a personal note: As a part-time stay at home mom, I’ve been hanging out with a lot of nannies lately, whether it’s my own, or it’s those who take care of the children of friends of mine and their nanny friends. It makes me happy to see a book out there that is written with their experiences and point of view in mind.

6 thoughts on “Not Just Another Nanny’s Diary: “Tell Us We’re Home” by Marina Budhos”