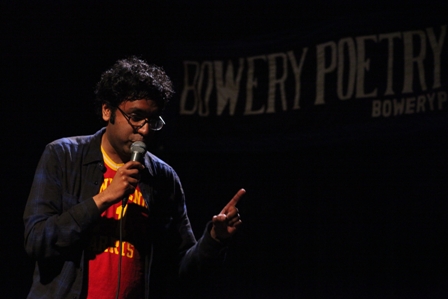 New York comedian Hari Kondabolu is known for a lot of things. There is of course his standup comedy, which landed him on Jimmy Kimmel Live and on the HBO Comedy Festival. He’s also the prolific creator of hilarious comedic sketches, which he often posts on YouTube, including the award-winning short film, MANOJ (which Amardeep blogged about in the past). But what I found striking about Kondabolu’s particular brand of comedy is his determination to both entertain and enlighten through his work – as opposed to simply mining his South Asian background for laughs. Says Kondabolu, “When you’re doing something that is clearly ignorant and at the expense of others in your community, that’s a different kind of thing… There is enough racism in comedy directed towards us [as a South Asian community], why are we adding to it?” Below is an excerpt of the interview I did with Kondabolu for MTV Iggy in anticipation of his appearance alongside DJ Rekha, Fair and Kind, The Kominas and other artists at UNIFICATION 2010. (You can find the rest here.) I hope you mutineers will enjoy his incisive answers as much as I did.

When did you start doing standup comedy? Was it something you always knew you wanted to pursue as a profession?

No, I definitely didn’t see this as a job I could have in the world. I remember first telling my parents I wanted to be a comedian when I was like 7 or 8 years old and my mother flipped. “Absolutely not! Don’t ever say that!” It was like I had used a curse word or said “God doesn’t exist” in front of them (I have done both these things in front of them since then.) Even if I day-dreamed about being a comedian as a kid, how could I ever see it as a full-time job knowing my parents busted their butt to feed and educate their kids! I’m still amazed at how I stumbled into this career and what has resulted.

I first did stand-up as a teenager at a Comedy Night (the creatively titled “Comedy Night”) at Townsend Harris High School in 2000 and then continued to perform while attending Bowdoin College and Wesleyan University. I moved to Seattle in 2005 to work as an immigrant rights organizer and kept standup as a hobby at night. Next thing I know, I get discovered by the HBO Comedy Festival, perform on Jimmy Kimmel Live and open for Zach Galifianakis in early 2007. I wasn’t pursuing a career in comedy, and now all of a sudden, I had one. However, while all this is happening, I also get accepted to the London School of Economics for a Human Rights Masters program and I had to make a choice. “Comedy or Human Rights? Which financially unstable career path should I embark upon?” So, I decided to take a year off and get my master’s in London.

After returning to the U.S., I knew there was still a window open for me to realistically pursue a career in entertainment, so I decided to go for it. If I hadn’t been discovered and given an opportunity to showcase nationally when I did, I don’t think I would be doing this full-time right now. Let me also say that since deciding to do this full-time, my parents have been extremely supportive. I know for a fact that my Dad is proud of me since he Googles me every day! Which reminds me: “Hey Dad!!”

Do you ever regret taking a break in 2007 when your comedy career was going so well to pursue education?

I don’t regret going back to school for a second! It was an absolute privilege to study at LSE with very impressive people from around the world who continue to inspire me. I have friends now who work at the UN, Amnesty International, The World Bank, UNICEF… it’s incredible. Plus, I had a whole year to read and write and think deeply about topics I was passionate about. If anything, this has only informed and strengthened my writing as a comedian.

I’ve met many comedians who don’t really have something to fall back on when the iron isn’t hot, and I’m fortunate enough to have a master’s degree from a great international university. How could that be a bad thing?

Strangely enough, I think the year away from comedy (I barely performed in London) helped me realize how much I loved comedy and cemented my feeling that now was the time to pursue this career.

Why did you think it was important to be involved in UNIFICATION 2010?

I did UNIFICATION last year and I loved it. I believe in the “South Asian” political identity and this event symbolically unites Pakistani and Indian independence days. Regardless of where our families are from and what our religions are, the children of South Asian immigrants have a lot more in common than our parents always led us to believe. I’m not saying we shouldn’t celebrate the diversity of South Asian experiences and that the term is simple and clear (and I do realize South Asian events can become very Indian-centric), but there is a lot we all do share and I like the fact this generation is trying define themselves and own their identity.

Again, UNIFICATION was fantastic last year and I think it’ll deliver again. The creators of the event, Pushkar Sharma and Sathya Sridharan (aka BROWNSTAR) did a great job diversifying the kinds of art represented and sharing a great range of experiences from the South Asian Diaspora in front of a very cool Desi audience. I was most impressed by the number of older generation immigrants who were there and loved what we were doing. We talk about our frustrations with “Uncles” and “Aunties,” but when folks from that generation come through, it means A LOT. Additionally, money from the event will be going to the South Asian American Leaders of Tomorrow (SAALT). SIDENOTE: I was SAALT’s first intern in 2004 when they were based in NYC. They passed up a fresh-faced, mutton-chopped, 22 year old Hari for a full-time job. (No regrets! I still love them!)

As for my act this year, I’m planning a bit of a surprise.

On your Facebook page, you quote Buster Keaton. “Tragedy is a close-up; comedy, a long shot.” What does it take to be funny? What are the elements?

I don’t think good standup can be easily defined. It’s very subjective. I admire comedy that is honest and kicks upwards instead of beating down on people that are vulnerable. Comedy can reveal things we don’t necessarily see in our day to day – it can attack structures, history, unquestioned beliefs — and that’s interesting to me. I know some people look down on standup because they’ve had bad experiences with it. Bad standup is ridiculously painful. Plus, as cathartic as laughter is, it can also be extremely painful. To be told things that are racist/sexist/homophobic (etc) – and to perhaps even witness people laughing at that–is hard to take. However, standup has also allowed me and some of my favorite comics a way to hit back. We can confront what angers us and force the issue.

I mean, I’m not perfect. I constantly make mistakes on stage and say things I regret, but that’s part of the process of developing ideas. I feel artists have a responsibility to be thoughtful when presenting work, but I’m sympathetic to even comedians whose material I hate because I know how hard it is to speak in front of a live audience. I’ve been doing this 10 years and I still feel vulnerable up there. What I love about this form is that you can make a mistake and come back the next time and get better. You’re constantly developing. Your art grows as you grow and the results can be immediate.

17 thoughts on “Q & A with Comedian Hari Kondabolu”