Last week you saw a Part I posting on Indivisible: An Anthology of Contemporary South Asian American Poetry, an introduction to this first-of-its-kind collection of poetry and its contributing poets. In this second part, Indivisible’s editors (all three of them!) respond to a few questions about poetry, the process of bringing the anthology together, it’s eye-catching cover image and other topics.

Neelanjana Banerjee, Summi Kaipa and Pireeni Sundaralingam are not only the editors of Indivisible. Banerjee is a journalist, fiction writer, and blogger/editor with Hyphen magazine; Kaipa is a literary curator, psychologist, and editor of a literary magazine; Sundaralingam is a playwright, literary judge, and scientist. They are also poets in their own right. Read on for more about them and the process of bringing Indivisible together. 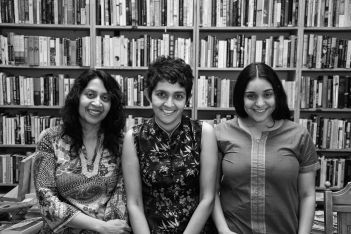 How did you get started writing poetry? What does poetry mean to you?

NB: I came to writing poetry as a young person. I was both influenced by Bengali culture–I used to memorize and recite Rabindranath Tagore poems at community functions–and American poets who got me through my teenage years: e. e. cummings, Sylvia Plath, Anne Sexton and Jack Kerouac. I was also very influenced by my aunt, Chitra Banerjee Divakaruni (also an Indivisible contributor), who published several books of poetry before she became a novelist. I studied poetry at Oberlin College, with poets like Martha Collins and Pamela Alexander, and then again while doing my MFA at San Francisco State University.

I spent this last year teaching poetry through an amazing program called WritersCorps, which places teaching artists in schools and community centers. I taught poetry at San Francisco’s Ida B. Wells Continuation High School and also in the school inside the San Francisco juvenile hall. Here I re-learned that poetry means shaping the everyday tools of language into freedom, love, beauty and expression.

PS: I grew up partly in Britain, a place where poetry is a living, breathing art form and where there’s a great appreciation for the sounds and rhythms of words; even in elementary school we were expected to memorize and recite a poem in week in class. Growing up there, surrounded by poetry at school, on the radio, on stage, it seemed natural to start writing poetry at an early age. While I was still at college, Jon Stallworthy selected two of my poems for the Anthology of Oxford and Cambridge Poets and so that encouraged me to keep writing, even when I went on to graduate school in the sciences.

SK: I began writing poetry in high school and worked as an editor of my school’s literary magazine, but I didn’t get very serious about writing until I went to UC Berkeley for college. There, I studied with several prominent poets, including Robert Hass, Lyn Hejinian, Alfred Arteaga, and Gary Soto. I also took many classes about non-white American and British writers a as a way to create a literary precedent for myself, and I began to be find kinship in Asian American poetry.

When I attended the University of Iowa Writers’ Workshop, I further honed my aesthetics, also recognizing the need to formulate more closely my ideas about being an Asian American writer. Interlope, a DIY journal of Asian American experimental poetics, grew out of these deliberations. I was trying to build bridges across Asian American authors, represent authors whose voices may have been marginalized, recontextualize authors who were not being read for the multiplicity of their cultural experiences, contemplate exclusion among Asian Americans, and work out what it meant to be an experimental poet.

My own poetics is a poetics of “hybridity,” of finding ways to intertwine disparate parts into a quilted whole, and I have always felt that poetry has a way of melding, moving, changing to accommodate experiments with genre.

Why is Indivisible the title for this collection of poetry?

NB: “We chose our title Indivisible–a word taken from the US Pledge of Allegiance–in order to reflect some of the tensions that exist between [unity and pluralism].” The work of anthologizing is all about bringing people together–in our case, bringing poets from a diverse range of experiences and styles together, but also having them address their origins and similarities. The 49 poets in Indivisible “trace their roots back to Bangladesh, India, Pakistan, Nepal and Sri Lanka,” but as the poems in the book show–this does not mean that their ideas, their style, their subjects, their world view is the same. In that way, we are not declaring “indivisibility,” but instead, investigating this concept.

How did you decide on the poets to include in the collection?

NB: The anthology went through several phases. We had an original call for South Asian American poets in 2003, and then we spent a few years curating poets for the book. We chose South Asian poets who were writing in America and engaging in American literature.

In terms of curating, we spent a lot of time in libraries leafing through literary journals, talking to editors and academics and chasing down any South Asian American poets we heard of to see if we thought their work fit into our criterion. All three editors also had to agree on the work.

PS: We were meticulous in making sure that all three of the editors read each of the poems under consideration. It was painstaking work and certainly led to some charged conversations as we got to our shortlist, but I know that the rigor of these debates cemented our friendship and certainly ensured the strength of the final manuscript.

All three editors came from different aesthetic backgrounds. Working as a group meant that when one of us had strong feelings about the work of a potential contributor, we had to be able to explain the significance of our choice clearly to the others; we had to advocate for choices that the other two might not necessarily choose themselves, and consequently, we ended up thinking more deeply about what makes a poem significant.

One of the editors mentioned at the event I attended that the collection was ready to go to press in 2003. How long did it take you to put together? And why did it take several years after that to get it published?

NB: When we first started this project, we had a publisher–a small press in Berkeley called Creative Arts Press. They folded in 2004, but by that time we realized that we had a larger vision for the project than we had initially thought and were excited to shop the manuscript to larger publishing houses. So, the next few years were spent in curating a more comprehensive anthology and shopping the anthology around to publishers.

We were very excited to land with the University of Arkansas Press, which has a great catalogue and dedication to poetry by ethnic communities. For example, University of Arkansas Press has published books like Inclined to Speak: An Anthology of Contemporary Arab American Poetry, edited by Hayan Charara and Let Me Tell You Where I’ve Been: New Writings of the Iranian Diaspora, edited by Persis M. Karim.

How does introducing each poet separately with personal statements, without any grouping by topic or theme or region, fit with the idea of “Indivisible” introduced by the title?

NB: This book was always first and foremost about poetry. So we had always envisioned presenting the work of the poets in a way that highlights the poets themselves. But we realized when putting the anthology together, that some poets do not mention anything about their South Asian identity in their bios, and that the book was also about this connection. So, we asked the poets to give us a one-sentence quote about identity.

This was met with some resistance, because we were asking poets whose work–especially as South Asian American writers–is about the difficulties of essentializing their complex identities to, basically, tell us “what they are” in one sentence. But it resulted in another complex layer for the book, with some poets talking about the complexity of their identity and some keeping it simple. For example, see Sasha Kamini Parmasad’s quote [“A South Asian in New York, I am also a sixth-generation Trinidadian, descendant of jahajees; I think of the Caribbean as my blood, India, my inherited bones.”], to poet Srikanth Reddy’s quote [“I was born in Chicago to Telugu parents from Andhra Pradesh.”]

I’m curious about the book’s cover image credited to Erik Dreher and Summi Kaipa, which looks like a piece of continental US-shaped embroidery. What was the idea behind it? How was it made? 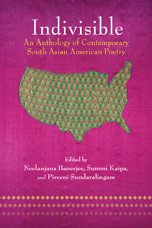 SK: We were looking for an image that would convey the complexities of the word “indivisible” which we lifted from the Pledge of Allegiance. We chose this word because we were interested in posing the question of whether we, as individuals claiming diverse lineages from South Asia, could be a unified group.

Also, could we be part of the “indivisible” multicultural landscape of the Untied States while still retaining a sense of our heritages? This latter question inspired the quilting theme. By sewing America into South Asian fabrics, we are sewing ourselves as South Asians, as another important immigrant group, into the fabric of the United States.

The final execution of the project was done with the help of my husband, Erik Dreher. The image is not, as many assume, photoshopped! Erik spent many hours diligently cutting fabric, sewing outlines of America into various silks, adjusting and readjusting fabric combinations, and photographing until we got the image just right.

The blog chronicling Indivisible’s progress offers a look at the publication process. Are there any moments along the way that really stand out for you?

SK: When the book actually launched, the most exciting moment for me was bringing the book to our contributors at AWP Conference in Denver (April 2010). I hadn’t met many of tour authors before, so it was wonderful to learn the faces and personalities behind the poems. I also realized that while as an editor, I had a panoptical view of the process as well as the knowledge of the authors we had assembled; our contributors were discovering the collection for the first time and were excited to be in this new conversation with other South Asian American poets and to feel a part of this community.

It was the first time I realized how Indivisible was such fertile ground for exchange.

PS: I’ve really been touched by the generosity of literary leaders from other ethnic communities who have reached out to support the book, as well as the way in which the book moves through the world with a life of its own.

For example, at our New York launch at St. Mark’s Poetry Project, a political science major told me that he’d been struggling with his poetry class that term, feeling it had little relevance to politics or his own life. However, having decided to come to our event on a whim, he’d been taken aback by the power of the poetry. By the time I came home from the reading that night, he’d emailed our website to say he was already part way through writing his paper and that he was using his understanding of the anthology to frame his analysis of larger political and poetic movements.

I’ve also been touched, and somewhat surprised, by the extent to which key figures from other ethnic circles have really thrown their weight behind the book. For example, the day that the book came out, I bumped into Chris Abani and found he’d already received a copy: he told me that Kwame Dawes had bought a stack of books and was gifting them to other eminent writers of color, encouraging them to support the anthology and it’s vision. It’s that kind of thing, a sense of the ripple effect of the book and of spreading community, that makes all the years of editing seem worthwhile.

4 thoughts on “Indivisibly Yours: Part II”