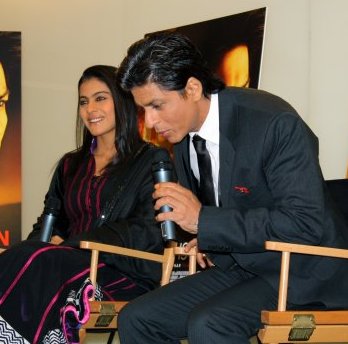 What next? No, really. I want to know. What next? First SRK announces he’s releasing a movie called My Name is Khan that has to do with issues of terrorism post-9/11. Then SRK gets detained by guards at Newark airport. Now, days after SRK wraps up a publicity tour in NYC, we hear that our friend is once again in the news? Life imitating art? Stranger things have happened.

Claims on behalf of authorities that naked body scanner images are immediately destroyed after passengers pass through new x-ray backscatter devices have been proven fraudulent after it was revealed that naked images of Indian film star Shahrukh Khan were printed out and circulated by airport staff at Heathrow in London. > “I was in London recently going through the airport and these new machines have come up, the body scans. You’ve got to see them. It makes you embarrassed – if you’re not well endowed,” said Khan, referring to how the scans produce clear images of a person’s genitals. “You walk into the machine and everything – the whole outline of your body – comes out,” he said.

“I was a little scared. Something happens [inside the scans], and I came out. Then I saw these girls – they had these printouts. I looked at them. I thought they were some forms you had to fill. I said ‘give them to me’ – and you could see everything inside. So I autographed them for them,” stated Khan.

Khan’s reference to “girls” with printouts of his naked body scan can only refer to female airport security staff responsible for processing the images produced by the scanners, “professionals” who are supposed to instantly delete the images, according to Lord Adonis. [Link.]

Although the actor seems to be using the story as a humorous, self-deprecating little anecdote, I’m sure we can all appreciate the privacy concerns this brings up for everyone – celebrity or not. Certainly the security at the airport should face repercussions for their unprofessional behavior. What do you guys think? More evidence of how the far-reaching long-arm of Big Brother invades the privacy of individuals, or funny story of a self-conscious actor who is afraid the whole world now knows the size of his package? Will Khan become the poster boy for the conservatives who decried full-body scanners right from the moment they were implemented? Stranger things have happened.

65 thoughts on “Khan Signs Nude Pics of Self at Airport”