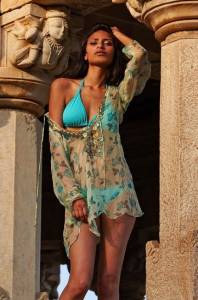 I know I know, I can hear the objections from the nattering nabobs of negativism. Why is this photo shoot in Rajasthan? Who wears a swimsuit in the middle of the desert? Look, I’m not going to defend SI. This photograph, for example, is completely absurd. I can’t look at it without cringing.

However, what bothers me is the exotification not the objectification. I’m totally down with the latter. I actually wish desi men would get objectified in the media, instead of being portrayed as they were in the superbowl ad for Metro TV below. I mean, don’t you get tired of being appreciated for your mind all the time? Right now, even the desi sex symbols in the media are geeks first and eye candy later. I’m doing my part to try to bring sexy back, but there’s only so much I can do alone.

One day, perhaps, desis can be depicted three dimensionally by the American media. Until then. I’d rather see more Sonia Dara and less of Ranjit and Chad.

(Update) You may also be interested in Sonia Dara’s spread in Vogue India, which shows her in a different context.

Lastly, let’s keep this polite whether you like Dara or do not. If the language in the comments go beyond the bounds of polite conversation, I’ll shut it down because I don’t have time to prune uncouth comments while at work. So please don’t feed any trolls who show up.