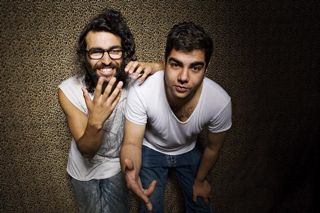 Remember Abhi’s post on hip-hop duo Das Racist back in May? He said, and I quote “This track is going to become a favorite of desis of all ages.” (Not sure about all desis, but these little girls certainly enjoyed it.) During the summer, Das Racist received heaps of attention, both positive and negative, from fans, magazines, blogs, etc. I chatted with Himanshu Suri of Das Racist to ask him what all the fuss was really about.

Q: A recent New York Magazine article called you “the jollier, more debauched half of the group.” Care to elaborate? Are they calling you Santa Claus? What’s up with that?

A: Umm. I’m a big fan of making jokes and having a good time, typically with a drink in hand. The jollier thing may be related to my plus-sizedness as well.

Q: That same article also mentioned you and your partner, Victor Vasquez wore “Cosby sweaters.” Now I know you write a blog called Gordon Gatrelle after a character in the Cosby Show. What’s with the Cosby obsession/parodying? Philly folks don’t take kindly to Cosby bashing…

A: There’s no Cosby bashing or parodying here at all. I’m a huge, huge fan. My DJ name is also DJ Maggie Lauten, which was Marissa Tomei’s character on the first season of Cosby spinoff A Different World. She played the only white girl at fictional black college Hillman. I kind of like the idea of expecting to see a white girl DJing and then seeing me instead. Is that weird? And as for the blog, Gordon Gartrelle was one of my favorite episodes of any TV show ever. BIG FAN OF LISA BONET TOO, AS SHE IS FLY AS HELL. I can talk about how influential it was to have a show about black role models that avoided racial stereotypes but ON THE REAL, LISA BONET IS FLY AS HELL.

Q: Your dad was a cab driver. Regarding tip, what percent do you recommend SM readers go with, cause I know I always have trouble with that one…

A: My dad drove a cab for a little bit but spent most of his time working at New York City hospitals as an administrator. As for tips, I go with two bucks flat usually. If it wasn’t a particularly long ride I’ll go with one. I try to avoid wasting money on cabs though. I might walk over the bridge or use public transportation.

Q: Das Racist has an album coming out in the fall. When exactly does it come out and what’s on it? Also, tour details. Youse guys better be coming to Philly. Yes? No? Please?

A: We’re working on a date in Philly pretty soon actually. I’ll let you know. I’m excited as I haven’t been since my 4th grade trip to the Liberty Bell. That was fun as hell. We hope to have something out by next year and have completed almost 20 songs already but nothing in the way of an “album” has been worked out really. A lot of what’s on our MySpace and has previously been on our MySpace will be on there. It’s tentatively titled “Shut Up, Dude”. I hope to incorporate many more Indian samples and prog-rock-like production effects as we move forward. I’m excited to have the music match the lyrical content as we’ve typically, consciously, forgone that to undermine any “message” with dance music to avoid being preachy rappers.

Q: So I read that you were vice president of your student union in high school. Any plans of running for political office anytime? Also you attended Stuyvesant High School, which is known for being a math and science school. Were you one of those pre-med dorks with giant glasses?

A: I see you’ve done your research. I mean, I think NY Mag and other media outlets have done a good job of preventing any ambitions of a political career I may have though who knows? Obama hell of did yae and spun that, so maybe me getting banned at a bar I’m now allowed to go back to isn’t so big of a deal. I leave the politics to my dear friend Ali Najmi, the future. I was far from a pre-med dork. I was pretty good at math, though not in college, and was pretty terrible at all things “science”. My best grades definitely came in English and social science classes.

A: Yeah I guess that backfired for them. Victor is an insanely talented dude at the end of the day. Maybe that’s why they wrote that piece on MF Doom recently. (Peep that if you’ve yet to.)

Q: Das Racist’s live performances have received their share of criticism. A New York Times article says, “At Union Pool Das Racist was messy — sometimes appealingly so.” Jill Krasny, a writer for Spinner.com wrote about a “sloppy drunken set.” Care to comment? Is it time to stage an Alcoholics Anonymous/Narcotics Anonymous type intervention? I know your response is that the journalism behind articles like these is “lazy and misinformed….”

A: While I don’t know how playing a “messy” show equates to alcohol or drug abuse for you, I can say that Jill Krasny wrote that piece on us and within 3 hours it was taken off of Spinner.com because she confused our hypeman Ashok with me, and myself with Victor and quoted someone as a valid source on hip-hop that had one rap album on their entire top 100 list of 2008. We pointed that out, as we were offended she couldn’t tell one brown person from the next, and it was gone. Our live show can be messy but moreover I can say this, we tend to alienate people in our crowds sometimes and that leads to disparaging reviews. The call-and-response of “Everybody say ‘White People’” is a personal favorite that comes to mind. That same New York Times article you mentioned had a good grasp on what we’re trying to do with our music though. A lot of people have preconceived notions of what a rap show should be like and our approach to live performanes is much more akin to a punk show than anything else so it can be confusing. We usually have a floor tom and snare up there that we’ll bang on repeatedly, off-beat, for no reason. We’re having a good time, and if three or four people in the crowd have a good time as well I’m content.

A: I’m genuinely a fan of pop music and may occasionally enjoy myself some Taylor Swift which is gonna be a big blow to any perceived “street cred” I have, though what Kanye’s done for music as a whole is worlds beyond her contribution. He literally took intelligent rap and humorous rap and made them acceptable to a world that only wanted black rappers to talk about guns and bitches, while not being so preachy and annoying as the rappers that specifically place themselves on the polar opposite end of the spectrum as guns and bitches who are equally as unoriginal. He’s not preachy yet he’s not a stereotype, that’s actually exactly what I think our band wants to do, though he needs to probably chill the f*ck out, which I think he’ll do now.

4 thoughts on “Q&A with Himanshu Suri of Das Racist: Part I”