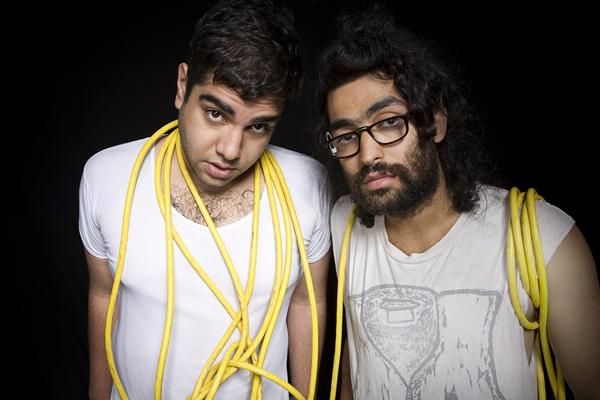 When we left off on Friday, Himanshu Suri, one half of the group Das Racist, was dishing on The Cosby Show and Taylor Swift. And now for more substantive questions…

Q: Das Racist has been labeled blipsters. Also hipsters. What’s the huge fuss about? In other words, why does everyone hate on you guys? And were you really a sk8ter boy growing up?

A: That blipster thing was weird. Those types of classifications of people don’t do anything positive. It was an article on black people dressing like white people that dress how black people dressed in the ’80s but didn’t address the cyclical nature of it and basically stood to further alienate an already alienated group. And I don’t know if you noticed, but I’m not black. I was told it was an article on cross-cultural fashion and I made a shit ton of points that were ignored for a quote on skateboarding. (Yo I don’t even skateboard!). And Daggggg. I wouldn’t say everyone hates on us. Certain publications have taken quite a liking but any time that happens in this age of fickle internet fandom you have backlash and that’s something any artist has to deal with. Like I said we’re not making music that’s instantly appealing. We dabble with nonsequitors, dadaism, repetition, repetition. We make dance music while talking about not-dancey things. We say things that on the surface can seem pretty dumb but it’s a mask on some Paul Laurence Dunbar shit for actual discontent with a lot of shit in the world. Further, not a lot of people want to hear rappers talk about Dinesh D’Souza being a punk, Eddie Said, Gayatri Spivak being dope or even know who they are. A lot of people hear Pizza Hut Taco Bell and then have preconceived notions about our entire body of work that fall prettty flat if you ask me. But yeah, we seem to be pretty polarizing.Q: You were in New York City during 9-11. Thoughts on its anniversary?

A: I was actually four blocks away and saw it in person. I had to cross the bridge to Queens with about 35 South Asian and Indo-Caribbean friends as we decided the safest thing to do in that confusing time was stick together. A girl we were with got harassed for rocking a hijab and I’m glad we were there. In reality, I still haven’t figured out the effects of witnessing that but I know they are there. I know a lot of things about me changed around the same time that happened but I’m not sure if it was just a natural part of adolescence or a result of 9-11. Therapy or something will help me figure it out I hope.

A: My major was Economics. I took nine classes related to Economics and 12 related to South Asia (History, Literature and Art History mostly) and Postcolonial Studies though they don’t have a S.A. Studies program at Wesleyan and didn’t accept my several attempts at designing one. That led me to attend School of Oriental and African Studies in London for a semester where I studied History, Economics, and Cinema. Part of my impetus to go to London was also to observe the differences between South Asian diasporic youth there and here since immigration started later here (1965). I LIKE FASHION THOUGH.

Q: On your blog, in one post you write “post-9/11 you do have the Taqwacore movement and bands like The Kominas making music much akin to ADF in terms of political lyrics and visibly a band of South Asians but i’m not really buying that shit…” Hating on The Kominas, huh? Is a Hipsters v. Punks gang war on the horizon? Is a battle of the bands coming up soon?

A: I don’t hate on punks at all. Television is one of my favorite bands, ever, and Please Kill Me: An Oral History of Punk is top 3 favorite books of all time for me. And I’m not sure if I identify with “hipster” but that’s whatever. Sooooo, I didn’t mean to fire shots at Kominas but it’s not really my type of shit and not because it’s not rap. For my taste, it’s too straightforward politically, which if you see how we approach “political” topics in our music is pretty much the opposite. At the end of the day it’s always great to see South Asians making art and music but I’m not doing backflips over them and am a pretty outspoken guy so I wrote that. Again, I respect any South Asian making art or music but it’s just not for me. I think Popo is a far better band of South Asians making “punk” music, not to reduce them to one genre.

Q: Have your parents ever come to a show? Do you want them to?

They have not come to a show, though my sister has. She had fun. My mom’s offered to manage us though. I thought that was funny. I’m not sure I’d want them to come to a show. I wouldn’t necessarily mind but I feel weird enough at my shows I can’t imagine how they’d feel.

Q: Is it true Taco Bell/Pizza Hut have approached you folks for their new ad campaign? Or is that just a rumor SM is spreading through their Twitter account?

A: It’s a rumor SM is spreading through their tweets. Keep it up and hopefully they will approach us. Petition them.

Q: A little bird told me you’re a fan of the show Gossip Girl and one of your favorite movies is Leopold & Kate? How soon before Serena van der Woodsen shows up in Das Racist lyrics?

A: As for Gossip Girl, I’m a fan of escapism….. Breaking News: Local South Asian Enjoys Viewing Moving Images on Screen for Escapism – Associated Press. AND finally, Kate & Leopold (not Leopold & Kate, sheesh) is a national treasure if you ask me. (As is the film National Treasure, filmed largely in your home town of Philly). Years of growing up on Bollywood films have desensitivized me to romantic comedies and I’m good with who I am so I can openly appreciate a movie like that. It has time travel (who doesn’t like time travel?), romance (who doesn’t like romance?), and as a native New Yorker obsessed with the New York that existed before my time I’m particularly smitten with the 1800s NY vs. 2000s NY angle. So that explains that? Also, though entirely unrelated, I wanted to use the words “street heat” in this interview and had no way to incorporate them so…

A: Isn’t kulfi just ice cream? Why segregate? That said… kulfi, with faluda. All day.