Aman Ali and Bassam Tariq are taking a journey through New York City’s Muslim communities by visiting a different mosque in the city each night of the Ramadan month. They are documenting the experience in writing and with photos at 30 Mosques in 30 Days. 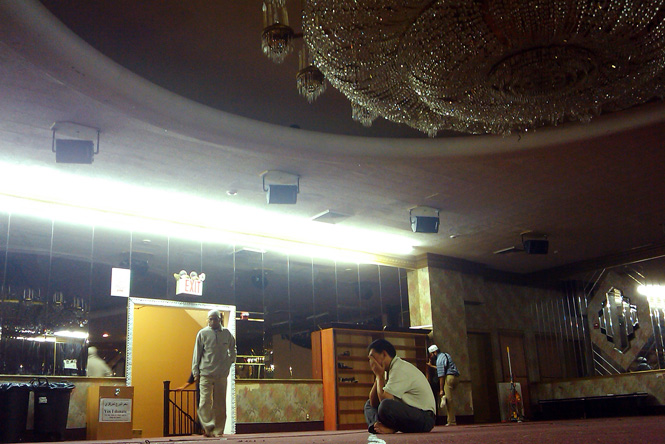 NYC has over a hundred mosques and the project offers an interesting peek at their diversity, their histories and the communities that gather at each place of worship. It has also caught the attention of TV, news and blogs, but Tariq’s mother wasn’t really into it at first.

“She was like, be careful, the FBI is going to follow you,” he recalls. “I said, ‘don’t worry, mom. Things have changed. We have a black president now. Things are going to get better.’” (NY1) (As it happens, the most recent update on their site notes that someone at a Bosnian mosque asked Tariq for his ID because of an “incident with the FBI.”)

Tariq also told TV network NY1, “sometimes we’re the only ones that are South Asian, and the place will be all Indonesian or all African American, and we’ll walk in and everyone will be very happy.”

The photos they took of the places, people and food help to convey the spirit of these places of worship, small and large. Ali described what made a particular mosque undergoing construction a beautiful place. Even with rolled-up insulation in the open and wooden planks underfoot, the people managed to strategically use carpets and lighting to create a cozy environment.

There was something incredibly humbling about this place, that’s hard for me to put in words. You don’t need things like extravagant domes and fancy calligraphy on the walls to make yourself feel at home in a mosque. Because there’s more than one way to make a place look beautiful, as the people here have done. (link)

While the images and writings on their site often give a sense of the warm welcomes they received and the delicious-looking assortment of foods offered for breaking the fast, they don’t limit themselves to sharing the purely positive aspects of the experience.

For example, during a solo visit to a mosque in his neighborhood attended by West Africans, two blocks away from a Bangladeshi one, Tariq felt uncomfortable.

In fact, it was only when I started to wonder how the rest of the congregation percieved me that I began to feel uneasy. I felt like a freeloader coming in — barely eating the food offered to me — and then leaving abruptly aftewards. A bad exhibitionist, if you will. Though no one in the masjid might have felt that way, I wonder if anyone asked themselves, “Why didn’t he just go to the Bangladeshi mosque?” Maybe it’s my own insecurities that raise the question.

Overcoming personal insecurities and stepping out of one’s comfort zone to meet and pray with new people from different cultures every night does not sound like the easiest thing to do. I give Ali and Tariq credit for doing that on a regular basis during their Ramadan journey across the city, after a full day of fasting and holding down their respective dayjobs as a stand-up comic and copywriter.

I haven’t had a chance to read all the write-ups and photo essays yet but did notice visits to Brooklyn’s Masjid Khalifah, a mosque started by Malcolm X followers, Staten Island’s Albanian Islamic Cultural Center, mosques in Harlem and in the Bronx, and one in Queens with a predominantly Indonesian congregation. Some mosques had previous lives as dance halls, truck companies and banquet halls.

Besides crossing geographical boundaries, the project also involves crossing community boundaries between Shi’a and Sunni Muslims. A visit to a Shi’a mosque prompted Fatima Ashraf, one of the women contributing to the project, to reflect on what it’s like for Shi’a Muslims.

I felt like such an outsider. Other than the piece of clay and praying with my arms at my side, I had no idea what I was doing. I reflected on my discomfort – Shi’as are such a minority in the Muslim community all over the world. But in the states, when we are all minorities, and mosques are numbered, how must Shi’as feel in Sunni masjids? And since there are far more Sunni masjids than Shi’a ones, it must be a pretty common that Shi’as find themselves in Sunni land. (link)

I’m not Muslim or familiar with how things work at mosques, so I appreciated the chance to get a glimpse from the inside of various NYC Muslim communities as provided by Ali, Tariq and other contributors to their project. I am also curious to see how they might continue their exploration and interaction with NYC’s mosques and their communities after the 30 days is over.

What do you think of the 30 Mosques in 30 Days project?

New York Masjid: The Mosques of New York seems to focus on the architecture of Muslim places of worship in NYC: slideshow of photos from the book, additional photos and interview with the co-authors.