We have reached yet another milestone as a community, one that was critical to our development. A desi of Indian origin has seized the coveted Miss Great Britain title! 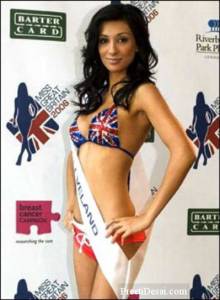 With so few beauty pageant titles left unclaimed by the rising tide of brown in swimwear and heels, it was very important that we capture each of the remaining tiaras:

British-born Preeti Desai has become the first person of Indian origin to win the Miss Great Britain title replacing original winner Danielle Lloyd after she was stripped off the award for reportedly dating Judge Teddy Sheringham and agreeing to pose for Playboy magazine. [Link]

As with many winners, she has a heart-warming story behind her victory, one of filial piety:

Preeti gave all credit to her mum, who is recovering, from a serious illness. “When she was crowned Miss Great Britain she rang to tell me and said, ‘The crown is for you.’ I burst into tears. I felt as if I won that crown. I felt as if I am Miss Great Britain. She only wants to see me happy – both my girls do. They want to see me smiling thanks to them I was able to overcome that dreadful illness,” Hema said. [Link]

Like all good desi children, Preeti is multi-talented and ambitious. She worked for years in hair and beauty, before making a career switch to the family fireworks business and she may now be trying to get into property investment. In what I think are her own words:

She then started, and is currently working for the family business G2 Fireworks full time and was made Jr partner, which she built up after years of working for G2 Fireworks from being a child… Recently she decided to move to London and work as a model until she raised enough money to eventually get into the property business. [Link]

If you’re a fan, you can read her myspace page and personal website.