The amount of havoc wreaked in Karachi by the weather over the last few days has been insane. 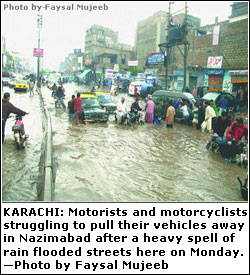 With 51mm of rainfall in the last 24 hours (whatever that technically means, all I know is that my mother spent most of her day scurrying about in the rain with a trowel in order to re-plant her seedlings in parts of the garden that were elevated enough to rise above it all), things have been kind of nuts. While I haven’t really been out of the house much, since everyone in Karachi magically loses the ability to drive successfully if it’s pouring, my short stints have seen a fair amount of damage done to parts of the city.

While the actual numbers are listed in the linked articles, so far people have died from the cold, from being electrocuted as live power cables snapped and fell into the water through which they were wading, and a number of shops and businesses have shut down because the streets are (were) flooded and there’s no access to them. Karachi’s most notorious underpass, which was designed to keep traffic flowing smoothly was temporarily the city’s most expensive wading pool, and all the while, power outages continue to make their presence felt–I’ve spent most of today trying to make sure that all the power outlets in the house are turned off so that the electronics in the kitchen and assorted rooms don’t blow up from sudden current surges. While it’s somewhat understandable that a desert city may not necessarily be well-equipped for rainfall, one would think that annual monsoons would have indicated to the municipal authorities that SOME sort of drainage system is in order.As a bulletin from the Asian Coalition for Housing Rights states, apparently,

of the 350 million gallons of waste water Karachi produces every day, only 30 million gallons are treated by the Karachi Water and Sewage BoardÂ’s three treatment plants (two built by foreign loans), which have the capacity to treat 151 million gallons. All the rest flows into the cityÂ’s 9 natural drainage nullahs (canals/lanes), and out into the sea – untreated. Foreign-financed infrastructure projects may be bankrupting Pakistan, but for the banks, the big construction companies and the high-flying consultants, they are real money-spinners.

I’m hardly an expert, but having seen the amount of construction work going on in various parts of the city, particularly the (oft-described as “upscale”) ares of Defence and Karachi, I’m not sure that anything substantive is really being accomplished. I think the best analysis to date that I’ve found of the problem is in one of Pakistan’s better-selling monthly news magazines, Newsline, which has a rather good article on the problem, and discusses the issues rising from the summer monsoons that effectively crippled the city this past summer, in July. Some choice quotes:

It started with some rain. Then before you could say the word “infrastructure,” the city flooded. The mayhem that followed was of Katrina-like proportions: power outages, telecommunication failures, collapsed roads, sewage in the streets, car breakdowns, stranded workers, five-hour commutes, flooded businesses, crores of inventory soaked and ruined, inaccessible hospitals and electrocuted pedestrians.

The rains that happened in the last few days haven’t had quite as catastrophic consequences as one would have expected on the basis of the article, but they’ve definitely messed the city up substantially. One of the major problems has been the covering up of the nullahs, the drainage canals, by housing developments that while not technically illegal, shouldn’t have occurred in the first place, were it not for incompetent or possibly corrupt land zoning authority regulators who seemed to think that allowing construction work to block drainage sites wouldn’t cause any future problems.

Well, at least the rain seems to have stopped. Anyone know where I can get a canoe?