The little black dress (actually a long black dress) worn by Audrey Hepburn in Breakfast at Tiffany’s has just been auctioned off for a record $924,588 dollars at Christies in London, on Tuesday. This was roughly six times the highest estimate for the amount of money that the dress would bring in. 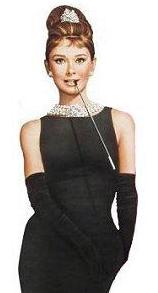 The dress was designed by Givenchy, who later donated it for a sale to help the famous “City of Joy” charity in Calcutta:

The dress, an iconic piece of cinematic history, was designed by Hubert de Givenchy, who became Hepburn’s life-long friend in 1953. He donated the dress to Dominic Lapierre, founder of the charity City of Joy Aid, which helps India’s poor…

Hepburn, who died in 1993, devoted much of her time in her later life to her role as Ambassador for UNICEF, the United Nations Children’s Fund.

City of Joy Aid is supporting the work of more than 1,000 social workers, doctors, nurses, therapists and educators in India, helping more than four million sufferers of tuberculosis, cholera and leprosy. [Link]

p>Givenchy made 3 such dresses for Hepburn – the other two are in museums. The charity was founded by novelist Dominique Lapierre who wrote a book of the same name which later became a movie starring the incomparable Om Puri and also Patrick Swayze.

Hepburn was one classy dame. Her commitment to helping others lives on long after she’s dead and gone.