Outsourced should take a page out of this Conan O’Brien promo – this is how you do a gora guy in India and make it funny. And charming. But of course they won’t. Outsourced is an NBC show and NBC pathetically fired Conan off of The Tonight Show early this year after a meager 7 month run.

I think the promo is witty and gorgeous. I’ve been trying to find out who and where it was made, but came up empty. I did find the following.

Amex has been trying to lure Mr. O’Brien into appearing in a commercial since the company sponsored his comedy tour earlier this year. Several weeks ago, Mr. O’Brien said he was finally convinced by a funny script created by WPP PLC’s Ogilvy & Mather, as well as American Express’s past ads.

Playing on Mr. O’Brien’s obsession for detail, the new ad shows the comedian taking a trip to India to search for the finest materials to make curtains for his new show. Mr. O’Brien is seen using a loom to weave the fabric; stomping on flower petals to make the dye and having a gossip session with the local washing ladies as he dyes the material.

A person familiar with the matter said AmEx paid Mr. O’Brien more than $1 million to do the commercial. [wsj]

Conan is making his return to television, only this time it’s on TBS at the 11pm time slot. The show is called, “Conan” and his return begins tonight, November 8th. END_OF_DOCUMENT_TOKEN_TO_BE_REPLACED

You know the great art of stripper pole dancing that we see performed at the local gentleman’s club? Turns out everything-is-from-India-Uncle could be right… pole dancing it turns out IS from India. Watch and thank me in the comments (thanks Sushil).

Mallakhamb was introduced as a supporting exercise for wrestlers. “Pole mallakhamb” was started by Balambhattdada Deodhar sometime between 1800 and 1810. The mallakhamb pole used in competitions is a straight pole made of teak or sheesham wood, standing 2.6 metres (8.5 ft) in height with a circumference of 55 centimetres (22 in) at the base. [wiki]

Pole dancers in the West could learn a move or two from these Mallakhamb acrobats. I’m just saying. END_OF_DOCUMENT_TOKEN_TO_BE_REPLACED

I’m not one to really open the FW-ed e-mails, but I got this in my inbox this week and couldn’t wait for the next #MusicMonday to share. I realize as far as memes go, this may be a little outdated, but funny desi-fied music video covers are timeless (h/t Zaida).

Lola Kutty, the bespectacled woman in the front, is a VJ on Channel [V] and the alter ego to Anuradha Menon. Ultrabrown linked to some kitschy posters of Lola Kutty back in ’07. I’m surprised I hadn’t heard of Lola sooner. Then again, maybe there’s a little part of Lola Kutty that exists within all of us and I’ve always known her.

Lola Kutty is a bespectacled Keralite lady who speaks English with a heavy Malayali accent. Unlike other VJs, she has curly oily hair sporting a gajra and wears silk saris. Unlike Jassi of Jassi Jaissi Koi Nahin, Lola has no plans for a makeover[3]. She is a huge fan of Abhishek Bachchan[9]. Her assistant is Shiny Alex, who wears fluorescent shirts, matching slippers, and mundu folded up. [wiki] 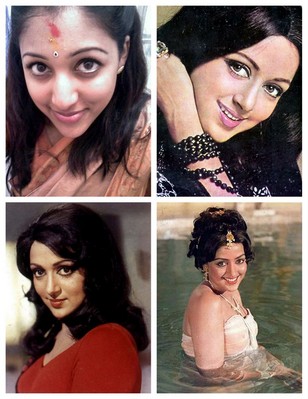 “I’d participate, but there are no Hollywood celebrities who look like me. :o(“

“Is someone feeling left out because they are Brown?”, I wondered. “Because THAT’S a post!”. I had no idea how much of a post it could be until my own Facebook profile became a hotbed of discussion about why people were participating, what it meant to participate, as well as questions of representation, inclusion and “[passing](http://en.wikipedia.org/wiki/Passing_(racial_identity)”. The original point of the game may have been to simply change your profile pic to that of a celebrity whom you allegedly resemble, but I sensed that there was more here than a mere meme. END_OF_DOCUMENT_TOKEN_TO_BE_REPLACED

Earlier this month, the “25 Random Things About Me”-meme was so omnipresent on Facebook, even major papers like the New York Times and the Chicago Tribune discussed it. What, you haven’t heard of it? Wow. No wonder newspapers are going out of business! Well, here’s some background info from the grey lady, then:

…the latest digital fad â€” a chain-letter-cum-literary exercise called â€œ25 Random Things About Meâ€ â€” is threatening to consume what little remaining free time and privacy we have.

Hereâ€™s how it works: friends send you an e-mail message (or, on Facebook, â€œtagâ€ you in a note posted to their profile) with 25 heartfelt observations about themselves â€” like â€œI named my son after a man Iâ€™ve never metâ€ or â€œI once paid good money to see Whitesnake in concertâ€ â€” along with instructions for you to follow suit. You are then expected to gin up your own clever list and foist it upon 25 people, including the friend who asked for it in the first place. [NYT]

The 25 things can be habits, goals, quirky facts– whatever. Everyone on Facebook seemed to be doing it, so much so that a backlash started. People used their status messages to denounce the meme and warn others from including them. Groups like “Stop Tagging Me in 25 Random Things Posts You Tards” were formed. But the lists weren’t really THAT bad. No one was forcing anyone to read them. Often, if you did, you’d end up learning fascinating things about the people whom you allegedly “know”.

That’s the thing about “25 Random Things About Me”: Once you stop being annoyed you realize that, at its best, it’s one of the more compelling — and, yes, even oddly inspiring — wastes of time to hit the Web in years. And let’s cut to the chase. Should we really be complaining about the inanity of this new trend? We’re a nation entertained by lolcats. [salon]

Word. Besides, it’s not like this is anything new:

â€œItâ€™s a brainstorming exercise,â€ said Anne Trubek, an associate professor at Oberlin College who said she used to give nearly identical assignments 15 years ago to beginning writing students. â€œItâ€™s used to get people to think about ideas without the pressure of developing a thesis or an argument.â€ [NYT]