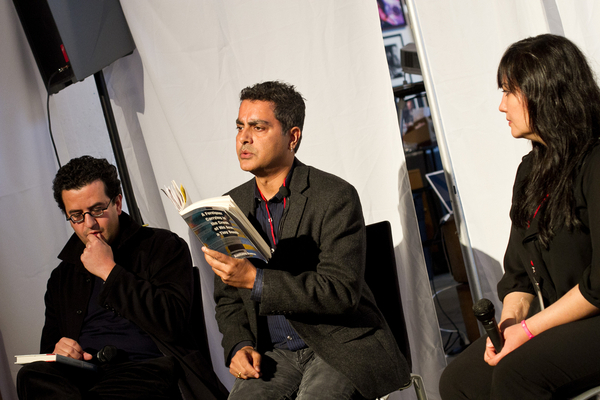 Today is exactly six days after Sugi sent me to the Asian American Literary Festival and four days into National Novel Writing Month. What better than a poetry contest with a literary giveaway and some photos of your favorite Asian American writers to inspire you fervent scribblers?

Here’s the deal. This week marked the end of a pop culture era. I’m talking about the anti-climactic marital misadventures of E! darling Kim Kardashian. Frankly, my dears, I don’t give a damn. But Sir Salman Rushdie obviously thought it worth a Tweet or three. Here’s his limerick about the sex-tape starlet:

“The marriage of poor kim #kardashian / was krushed like a kar in a krashian. / her kris kried, not fair! / why kan’t I keep my share? / But kardashian fell klean outa fashian

But guess what, mutineers. You can do better. Leave your entries in the comments along. Winner gets a copy of Amitava Kumar’s award-winning book, A Foreigner Carrying in the Crook of His Arm a Tiny Bomb. We’ll announce a winner in the comments next Friday, November 11th.

Writer’s block? Check out another lovely photo from the Asian American Literary Festival below from the Mutiny’s own Preston Merchant along with some writing advice. (Thanks Preston!) The accompanying quotes were tweeted on the day of the event through the SepiaMutiny account. 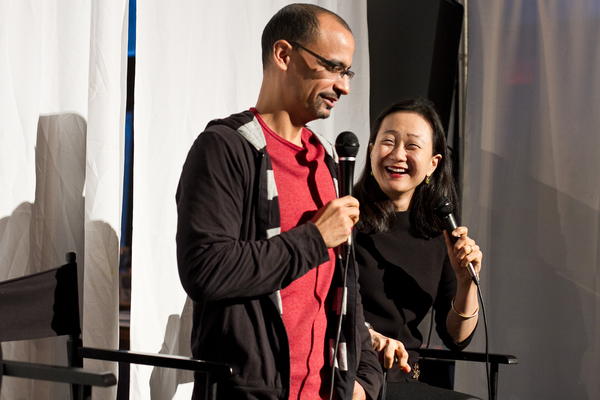 On Finishing a Book

“I live in the universe of doubt. The hard part isn’t writing the book – it’s finishing it.” – Junot Diaz

“To finish a book, you need compassion for yourself.” – Junot Diaz

On Authors Who Inspired Them

“Reading Naipaul really helped me as a writer. I don’t think he wants to help me – but he did.” Min Jin Lee on A House for Mr. Biswas

“We’ve drawn so much courage from writers that we didn’t know.” -Min Jin Lee

“As immigrants, we cast our audience as the parents who wish we became doctors. Our audience is the neighbor offering us a joint” Junot Diaz

“The idea of being a fiction writer was such a luxury to me.” Min Jin Lee

“I was told many times that my writing was either too Korean – or not Korean enough.” -Min Jin Lee

“Can we please tell ourselves to stop being the Tiger Mom editors?” -Min Jin Lee

“It’s a-historical of our biographies to write.” Junot Diaz

“If you grew up the way I did – a Dominican kid in New Jersey – being an artist was insane.” – Junot Diaz

On The Importance of Audience

“Despite all the hating in the blogosphere – most of the people [that read your work] want to like you.” Junot Diaz

“As a writer, you need a strong conceptualization of what the reader needs.” – Junot Diaz

4 thoughts on “Of Writings, Marriages and Giveaways”