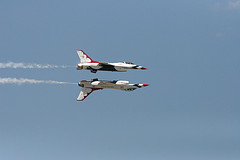 Her account describes how the three of them were cuffed and placed in a squad car, driven to the airport police station/Homeland Security office, detained, questioned, and strip-searched without much explanation. It seems that someone reported her and the two men for suspicious activity.

Again, I asked what was going on, and the man said judging from their line of questioning that I could probably guess, but that someone on the plane had reported that the three of us in row 12 were conducting suspicious activity. What is the likelihood that two Indian men who didn’t know each other and a dark-skinned woman of Arab/Jewish heritage would be on the same flight from Denver to Detroit? Was that suspicion enough? Even considering that we didn’t say a word to each other until it became clear there were cops following our plane? Perhaps it was two Indian man going to the bathroom in succession? (Stories from the Heartland)

After she was released to go home, a police officer apologized to her and offered an explanation:

He said the three of us were being released and there was nothing suspicious found on the plane. He apologized for what had happened and thanked me for understanding and cooperating. He said, “It’s 9/11 and people are seeing ghosts. They are seeing things that aren’t there.” He said they had to act on a report of suspicious behavior, and this is what the reaction looks like.     He said there had been 50 other similar incidents across the country that day. (Stories from the Heartland)

A brown person triggering an airplane passenger or crew member’s fears to the point of flight delay or flight ejection by just being brown or doing something mundane like going to the bathroom, praying, talking in another language, or wearing traditional clothing, etc., is not new. Various archive posts here and news articles over the years would show that. But the level of response on this occasion, which included the North American Aerospace Defense Command sending two F16 jets to shadow the flight because the crew noticed two Indian men using the bathroom at different times for an “extraordinarily long time” (next time try knocking?), is notable. It send an ominous message–that being brown is suspicious, being brown on a plane more so, and “Don’t Be Brown on a Plane on 9/11.”

29 thoughts on “Seeing Ghosts in the Air”