In the past, I have tried and failed to complete books about India. They tend to make me yawn. But when Amitava gave me a copy of Patrick French’s India: A Portrait, I was immediately hooked. The book contains a generous sprinkling of humorous, well-executed anecdotes guaranteed to delight (and likely inflame some) readers. After I completed the book, I reached out to Mr. French, who was kind enough to entertain my questions.

Why India: A Portrait? Why not the story of Japan or China or any number of other countries? What about India fascinates you enough to dedicate close to 400 pages and over four years to covering the country? Because India is, objectively speaking, the most interesting country in the world at the moment – with the possible exception of the United States. I felt there was no current book which provides a snapshot of India as it is right now, at a time of great change, but which also placed the economics and politics in a historical context.

What challenges were there to writing “an intimate biography of 1.2 billion people”? Did you ever feel as if you had swallowed off more than you could chew? The book’s title is India: A Portrait. It’s a picture drawn from many angles, but it doesn’t seek to be comprehensive. For example: there’s not much about cricket, Bollywood, the north-east or music. That “intimate biography” line is an advertising slogan from one of the editions of the book. Yes, it’s an intimate piece of writing. It uses personal stories to communicate a larger history – for example by looking at Indira Gandhi’s death through the eyes of her assassin’s son, or at the Permit Raj through the experiences of a junior scion of a business dynasty. 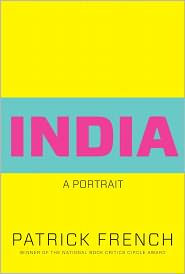 You’re no stranger to controversy. After Liberty or Death – India’s Journey to Independence and Division was published in 1997, there were calls for it to be banned in India. And with the publication of The World Is What It Is: The Authorized Biography of VS Naipaul, you were embroiled in controversy when Margaret Murray, the mistress of Naipul, accused you of inaccurately portraying her in the book. What criticisms did you expect with India: A Portrait? Were there any that surprised you? If you look at the correspondence in the New York Review of Books, you will see Margaret was portrayed accurately. Her (reasonable) complaint was that she did not want the biography to be written; unfortunately VS Naipaul did. You never know where controversy might come from, and whether it will be genuine or manufactured. With India: A Portrait, I didn’t anticipate problems. I didn’t realize I’d be attacked for celebrating some of the good things that are happening in India at the moment. And I thought the 1970s debate over “Who should be allowed to write about India?” had had its day. I think it’s a good thing if different people offer their perspective on a country. Nobody would seriously argue that only an all-American can write about America, or that only a PG Wodehouse can write about Britain.

In the foreground of the most recent Mumbai bombings, what in your opinion is the greatest threat India faces and why? There are many threats: water shortages, population growth, inefficient institutions, income inequality. I don’t see the bombings as the greatest threat. There will be more attacks like this one, for sure, but fundamentally India is a country where some very different communities live in comparative harmony. If you equate India’s experience to that of neighbouring countries, there are reasons for optimism.

The book itself is divided into three sections Rashtra (Nation), Lakshmi (Wealth) and Samaj (Society). If you had the opportunity – what other sections would you add and why? No more sections! It would have got too long. I wanted to write a digestible book.

Can you tell readers of SM a little about the database your research team created to measure political nepotism and what you discovered? We investigated the growth of hereditary politics in India by checking how each MP in the Lok Sabha had won a seat. More than 2 out of 3 MPs under the age of 40 were sons or daughters of politicians. 9 out of 10 Congress party MPs under the age of 40 were hereditary. For the older generation – MPs aged 70 or over – almost every one of them had got there on personal merit rather than through a family connection. The full dataset is available on The India Site.

I’m curious. Offhand, how many times did you get threatened in the making of this book? You featured a various government officials in a variety of unflattering poses… I assume not all of them were approachable… I didn’t get threatened once. Providing you know what you are doing, India is a fairly easy country to work in – because everyone wants to say something. I’ve been writing about India for 25 years now. My wife is Indian. It’s not like being in China or Tibet, where people get in trouble if they speak openly. If you get into a tricky situation with a government official in India, it’s best to play the dumb foreigner.

I found the book, especially the first section, Rashtra, made me laugh out loud much more than I’d expected from a biography about a country. What was one of your favorite stories from the book? Hey, I’m glad it made you laugh out loud! I think my books are funny. They’re written to entertain, and to provoke readers into thinking a little bit differently. One of my favourite stories was about the social adventures of Chandraswami, the political godman. Another story I enjoyed writing was about the man from UP who runs a posh escort agency in Delhi and visits the temple each morning. Even sad stories can be funny – like going to Tihar Jail and ending up meeting Afzal Guru.

Tell us a little about the mechanics of writing the book. Number of interviews. Number of research assistants. Pages you trimmed down from. Hours in solitude. Etc. Well, it’s the fruit of many years of thinking and watching. So that makes a lot of conversations in India. I didn’t use research assistants, except for the two who appear in the text assisting with the “hereditary politics” research. They also did some work on poverty data, on education and learning, on international trade. Some interviews were in languages like Tamil, Punjabi, Telugu, Oriya – so then I had an interpreter. I wrote the book in the form it is now. I didn’t trim. I knew what I wanted to say when I set out. Hours in solitude? Many. But that’s the writer’s life.

Any hints about the topic of your next book? It’s about the Himalayas, in all their glory and distress.

Readers, stay tuned for French’s upcoming US book tour this October. You can find details in the next few weeks on The India Site and on Twitter.