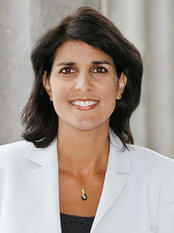 Haley — South Carolina’s first female and minority governor and the country’s second Indian-American governor — listed her race as “white” on her 2001 voter registration card… The state Democratic Party, which first obtained the public record, is calling Haley out on the matter and challenging whether her inconsistency on the card might have made her ineligible to voter under the state’s new Voter ID law. [postandcourier]

Oh Nimrata… As much as our politics and preference in alleged love affair diverged, I took a certain pride in knowing that we had our first South Asian American woman in governership. To marginalize yourself, when in leadership role, marginalizes the rest of us. Changing your name from Nimrata to Nikki is one thing, but changing your race? It’s skin. It’s blood. Unless you are Michael Jackson, it doesn’t rub off.

Now that I think about it, I think I have just the product for you, thanks to Sandeep Sood. This just may fit your need.

So Nikki, I’m going to give you the benefit of a doubt – like the 25% of South Asian Americans who marked themselves as White in the 1990 Census. This is your Public Service Announcement – No matter how great your dermatologist is or how much Fair & Lovely Inside you ingest, you are not White. You are a minority. A South Asian American. A woman of Indian heritage and Sikh parents.

And next time we hear someone Desi insist on their Whiteness, we can say, “She totally just pulled a Nikkie H.”