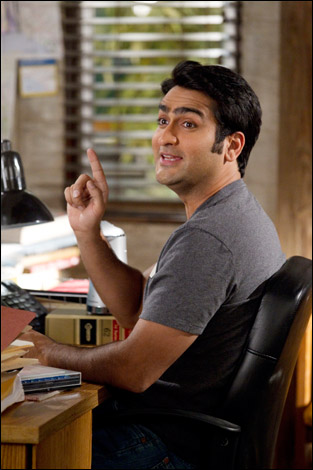 Last spring I wrote about Kumail Nanjiani, a Pakistani-American comedian slated to star in TNT’s new legal-comedy, Franklin & Bash. Amardeep first introduced us to him back in 2009 and Taz later wrote about his run-in with singer John Mayer. Well, the show finally aired this past spring and thanks to a law school classmate, I have been keeping a close eye on our friend Kumail, who plays Pindar Singh, a highly anxious agoraphobe whose research and writing skills make him invaluable to the “frat house bromance” that constitutes the firm of Jared Bash and Peter Franklin. Despite the show’s improbable legal scenarios, the fun-loving legal team of Franklin & Bash does manage to charm at times. And it looks like the ratings are fairly good for its Wednesday night slot. Then again, it may just be a fluke. Summer boredom and all that.

(Start watching at 3:50 to see Kumail talk about his new role.)

I can’t say I’m too keen on the character of Pindar. Unlike Kumail, whose stand-up bits are quite entertaining, Pindar’s character strikes me as decidedly unfunny. I would have loved to see the F&B writers use him better, but their attempts at humor involving Pindar tend to make me wince. They generally involve his a) awkwardness with women and b) awkwardness with life in general. As much as I want the show to succeed for the sake of Kumail’s professional career, I don’t know if it necessarily highlights his strengths. It mostly just makes me want to go punch a lawyer. Of course it’s only been five episodes so far. Catch the first episode for yourself and tell me what you think. Flop or not?

In the meantime, I’m holding out for Kumail’s show and following him on the Twitters.