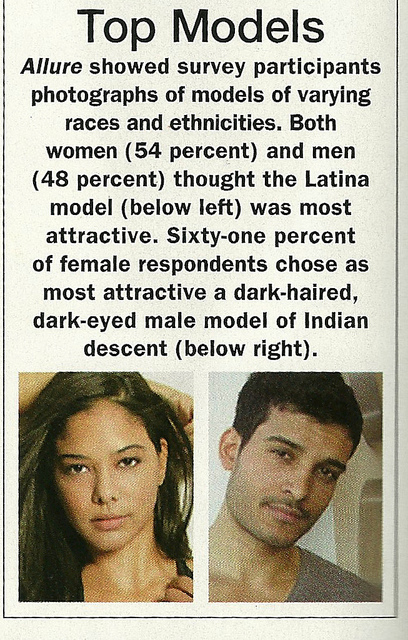 As a young child, I thought the standard for beauty was contained within the perfume-scented pages of Vogue. When I turned its glossy pages and saw impossibly thin (mostly-white) women with flawless skin carrying $10,000 handbags and hairless men with heroin chic eyes, I thought, “Here is beauty.” Well, I was all wrong. Beauty is actually a South Asian man. And a Latina woman, but let’s focus on the man for the sake of this blog. Allure magazine released the findings of a 2,000 person survey last month and found some interesting results. According to Racialicious blog:

Two decades ago, Allure conducted a study with 1,000 men and women called “What Beauty Means to You.” A clear picture of what was considered beautiful emerged – and her name is Christie Brinkley. But the last 20 years have brought major changes to our nation – and no where is this more evident than our ideas of who is considered most beautiful. The new celebrity “ideal” according to Allure is now Angelina Jolie. But here’s what’s really interesting. Allure also showed photos of non-celebrity models and asked respondents to rank the person who was most attractive. The top winners? A Latina female and a South Asian male (identified as a person of Indian descent).

Could it be that desi men in America have successfully re-branded themselves into sex symbols? Yes. We win. But let’s be honest, did we really need a survey to figure this out? Just take a look at the media hits desi guys have been getting lately. Only a few days ago, Lindsay Lohan cozied up to hotelier Vikram Chatwal, which quickly got the tabloids buzzing.

And of course, there was that New York Times piece on our (okay, my) favorite desi pretty boy, Waris Ahluwalia, who has been making beautiful jewelry over at House of Waris. (And if you really want to see pretty, take a look at Waris in this video released by Vogue in February. Tangent: Let the record show that I was in love with Mr. Ahluwalia ever since his first appearance in friend Wes Anderson’s The Life Aquatic with Steve Zissou. And I will continue to be in love with him despite his appearance in that awful film that came out last summer, I Am Love. You know why? Cause that man is gorgeous. B-e-a-u-t-i-f-u-l.

So for this post, let us raise an invisible glass to desi men everywhere. And of course, how could there be a post where I marginalize men if I didn’t link to this Tumblr celebrating desi men for their hotness, errr, I mean many accomplishments. [NSFW, possibly?]