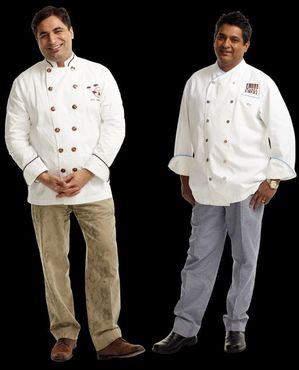 The third season of Top Chef Masters is different and not just because it includes for the first time ever, one–wait, make that two–desi chefs: Floyd Cardoz and Suvir Saran. Instead of having about 20 contestants as in previous years, this season has 12, and pits them against each other in elimination challenges like Restaurant Wars that come straight from the original Top Chef series format. But as usual they are all chefs already at the top in terms of professional success, competing to win money for charities and the title of Top Chef Master.

You can watch both chefs introduce themselves below.

Cardoz describes training with Taj Hotels in India, where he got two 100-lb. bags of onions to clean on his first day of work. He says he enjoyed it so much, so clearly he had the sado-masochistic tendencies required to work his way up in New York from salad cook to chef de cuisine. He was executive chef at Tabla, a NYC restaurant with a three-star review in the New York Times from Ruth Reichl, who is a judge on Top Chef Masters.

Saran, who lives in the rural New York state hamlet of Hebron with his partner, is really into farming (and he’s a blogger). He’s the executive chef of Devi in NYC, the only Indian restaurant in the US to have earned a Michelin star. He describes his signature dishes, which interestingly he’s not “fond of” himself, as okra salad and cauliflower Manchurian. I could never get tired of okra, but I wonder if chefs get tired of eating the dishes that make them famous.

Cardoz thinks he’ll win because he’s a nice guy. Saran says, “My strengths are going to be my good looks and my eloquence. Kidding!” So, how did they do last night? Well, here’s my take on it, and please do share your thoughts if you watched (or even if you didn’t).

Right off the bat, Cardoz has the fear factor going for him. He’s paired up with Alessandro Stratta, of Wynn Las Vegas, and Stratta admits that he was hoping he wouldn’t have to face Floyd first. The chefs each grab a box with a mystery ingredient and make a dish that incorporates it and their competitor’s mystery ingredient.

Saran and his competitor Celina Tio get stuck with marshmallow and corned beef. Saran notes, “Sometimes even a master has to come down from his pedestal and create something that’s not as bad as it ought to be.” After he steps down from that pedestal to make a concoction of corned beef and marshmallow chaat, judged to have good flavor but “loathsome texture” according to Reichl, he wins anyway because Tio can’t finish her dish in time.

Cardoz has actual competition for this challenge. His mystery ingredients are marmite and cockles, and his dish of marmite soup with cockles is deemed “quite a lot nicer” and “more interesting” than Stratta’s cockle soup and marmite spread on bread.

Cardoz and Saran end up on the same team for this challenge. Their team is thinking of names for the restaurant and no one suggests Padma Lakshmi or Desitude. But one chef, Canadian Hugh Acheson, observes that the team looks like a joke somebody’s grandfather would tell: “Two Indians, two Americans, a Canadian and a Portuguese guy…” I think it’s more of a setup, but without a punchline, and my grandpa told jokes about people from Madras.

Saran endorses the name Mosaic, and also worries about the spring chickens on his team who think more is better when it comes to garnishes. “To true masters, less is more…True masters make magic from nothing.” I think being the chattiest chef so far has worked out well for him in terms of screen time.

Reichl wants the recipe for the risotto in Cardoz’s spice braised short ribs with oat risotto. She also loves Saran’s dessert, pear and berry cobbler with a buttermilk biscuit for not being too sweet and having “just a touch of spice.“One reason the biscuits taste so good is that Saran made extra sure that the sweat off his brow did not drip into them. He demonstrates for the chefs how he held his head back to impede the flow of sweat. “In India, they would say it adds extra flavors…the sweat into the…”

In an effort to distract everyone from this information about India that Saran has just shared, Cardoz brings up another interesting factoid about India. “As they say in India, it’s time for another scotch.” I actually never heard that in India (mostly just “time for another drink of coconut water” or “time for another cup of tea”), but I think I heard it in a Bollywood movie once.

The critics like Mosaic’s food better, and only seem to really like one dish from the other restaurant Leela–the chocolate torte. But the customers pick the winner in this challenge and Leela wins. It might have something to do with Leela seating everyone at once, instead of staggered.

Saran dismisses Leela as a banquet-style restaurant, whereas Mosaic was run more like a “Michelin style” restaurant. Given his unique status as having one Michelin star for Devi, it will be interesting to see how many times he can work the word “Michelin” into future episodes. If it happened more, it could become a drinking game, and I might hear people saying “it’s time for another scotch.”

Saran sums up the Top Chef experience for his fellow contestants. For some of them, the show may be the first time in a while that they’ve done the work of a line cook preparing food for so many people under strict time constraints.

“We are title heads, we are inspiration, we are the muse. We don’t work. We don’t sweat. Some of us may. I don’t. I’m honest. We say things and magic happens. So this is wonderful. It’s the first time we’ve come back to planet earth, and we’ll be living like normal people.”

6 thoughts on “Top Chef Masters: Coming Back to Earth”