On Sunday night, my right knee gave out. Twice. This was only mildly surprising, since I was born with a bad right knee and I spent a year of college with it in a full leg immobilizer. The problem is, the Sunday before that, my left kneecap moved in a way that it shouldn’t, as I was ascending the stairs to my beloved cathedral while wearing the most glorious suede four-inch platforms.

That might be the single worst circumstance during which to injure your knee. Stairs? Heels? Hell. The pain was excruciating. I never made it past the narthex, which is where I collapsed on the first bench I could find. When the liturgy was over, I limped out of the handicapped exit and proceeded to drive a stick shift to the nearest CVS in Georgetown, where I procured a knee brace to hold my kneecap together.

Oh, the looks I got in that store, people scornfully glaring at me as if I were an idiot, stumbling around in heels when injured. Silly make-an-ass-out-of-you-and-me strangers. I am stubborn and unwise, but not THAT stubborn and unwise. Sheesh. So let’s recap: two Sundays ago, I hurt my left knee, and by the time I made it to urgent care, favoring my feeble right, it was too late– both were busted. And when they gave out this weekend, I knew that my Orthopedist might have underestimated how serious my injuries were. I swear, I have a point, and that point is, I am not very mobile right now.

Forget driving, I can’t walk without a cane. And that means that I am at home. All the time. Often with a boxing writer. And so I marinate in the sweet science, because, well, I have no choice. 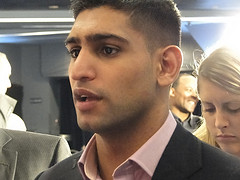 I guess there are worse sports to be subjected to, visually. Golf. Bowling. Drawn out games which involve bats and balls– of course, I am talking about vampires and testicles there, I promise. But I’m not that into boxing, despite said boxing writer’s endearing attempts to draw me in. He started (somewhat logically, given my mutinous proclivities) with Amir Khan.

Amir Khan is a British pugilist of Pakistani descent who is referred to as “King Khan”, or the “Pride of Bolton”. Khan is an Olympic medalist, and he’s a big enough deal that he trains with Freddy Roach; in other words, when he runs around, toning that lovely body of his, he might be trotting next to Manny Pacquiao. Perhaps you have heard of him? Anyway, I’ve seen King Khan throw stiff jabs and it barely inspired me to look up from the interwebz. Yay team brown and all, but it’s hard to cheer for someone who is prettier than and weighs less than me. I keed, I keed. It’s hard to cheer because I don’t give a tatti. In fact, no boxer has piqued my interest until I came across Sergio “Maravilla” Martinez. Because of the aforementioned boxing writer, boxing is constantly being recorded on our TV. That means that on a languorous saturday evening, when I’m happily ensconced in a recliner with a puppy in one hand, and a remote in the other, enriching my mind with such intellectually stimulating fare as “Bethenny Ever After” or the “Real Housewives of Wherever“, just as someone’s weave is being yanked, the DVR will dolefully warn me that a recording is about to start and then Poof!. I end up watching boxing, because it is impossible to watch a third channel when two programs are being recorded simultaneously and hey, did I mention that they often show boxing on a bunch of channels? YAY.

So one time when I was held captive by the DVR, something about the pre-fight hype and backstory-telling finally caught my attention. A fighter’s face filled the screen, as he was being interviewed. I saw intensely bright eyes and a kind smile, then I heard a heartbreaking admission of how this boxer grew up unaware of how impoverished his family was, as a child in Argentina, because, “I thought everybody just drank tea and went to bed. It’s all I ever knew. I did not know people ate dinner.” That was Sergio Martinez, and that got me hooked. Well, that’s not exactly accurate. Finding out he was as old as I am, and that he had taken up boxing relatively late in life (at age 20), is what snared me. I’m not ready to fork over all of my dreams to being middle-aged, and the marvelous man I saw that night filled me with a sense of possibility.

But I haven’t liked another boxer since, not even Micky Ward, even though “The Fighter” made me swoon. And that’s the problem with boxing– if you don’t like the people in the ring, well, why bother? I don’t care about Zab Judah or his “devastating” left hand. Sugar Shane who? I want to see Sergio Martinez succeed because I admire his tenacity and love to watch him fight.

I may have another somebody to love, in a few years (via the talented Dan Merica):

Headbangers Boxing sits in a small brick building right near the Navy Yard in Southeast Washington. But the excitement the gym lacks on the outside, is made up by the combination of character and passion of the boxers inside. Led by Coach Marshall Cunningham, the boxing club helps under-served youths focus their energy on something constructive — boxing.

And one boxer has taken the ideals of Headbangers Boxing — commitment, determination and passion — and ran with it. Sixteen-year old Lawrence Singh, the son of immigrant parents, is currently a member of the Trinidad and Tobago Olympic boxing team. Boxing has done more than propel Lawrence out of DC; it has formed an unbreakable bond between him and his father. Loknauth Singh stands ringside every time Lawrence trains, cheering him on as his son pursues his dreams.

I watched that and felt something stir, deep within. Happiness at this child’s accomplishments…sure. He is graduating from high school a year early, at 16. Pride in the possibility of a fighter from the Northeast (rare these days), who is from my adopted hometown AND is brown? Yeah, why not. But that’s not what made my heart crack a little bit for Lawrence Singh. No.

It was that look, on his father’s face.

I know that look. That sweet love once shined on me, as well, albeit in a different ring (where, ironically, I had a boxing-inspired-nickname: “Iron Anna”). My father never missed one of my debates, from ages 13-17. He carried my briefcase for me, murmured strategy in my ear and even helped out the rest of my high school team, functioning as our unofficial coach. I haven’t thought of that parental devotion in years, possibly because it’s been almost two decades since my Daddy spent his Saturdays driving me to some random high school at 6am, drilling me on my contentions and attacking my narrative all the while.

Nearly thirteen years after losing my own, much-adored boxing coach, I find myself at a point in life which I dreaded. I tried to avoid it, but I was dragged here, my heels creating grooves where my feet tried in vain to stop this inevitable movement towards unwanted, unintended nonchalance. Now, so many years after the one death which permanently altered my alignment, sending me swerving towards oncoming traffic instead of cruising straight ahead, I inhabit that numb space where the dead seem distant and illusory; my days do not contain enough poignant reminders of that other life, that steady, sustaining presence, ever ringside, a fierce South Indian mustache hiding a faint smile.

Lawrence Singh is a local honor-roll student, an Olympic hopeful and, Goddess-willing, a rising star in the South Asian diaspora.

But he’s also his father’s pride and joy.

And more than our both being Desi, that makes me feel connected to him, because he summoned powerful, welcome emotions. He reminded me of what it means to have a bespectacled old Indian man in my corner, and for that peerless gift, I am consummately grateful.

Creative Commons-licensed photo via Flickr, from Chamber of Fear.