Apologize for last week’s Music Monday fiasco – my effort at a Kei$ha cool factor clearly fell pathetically. Let me try to redeem myself. Have you heard of Curry Smugglers? (H/T Dancing Reena)

What started off as a dream two years ago, became a reality in 2009 and is now the leading show of its kind in 2010. Tired of talk radio antics of DJs/RJs talking over music, playing classified ads and old school bad BollyPop? Good. Because Curry Smugglers is none of those things and everything you want – a show that puts the artists and music first, listens to your opinion and bottom line – entertains you.[currysmuggler]

Though I’m more of a fan of the Alterno-Desi sounds, their latest release “Chill Edition 3″ has more of an electro-fused lounge feel (reminding me of Thievery Corporation from back in the day), including sounds of Sarah Brightman, Nusrat Sahab, Karsh Kale, Anoushka Shankar, Nitin Sawhney. You can download the 77 minute mix through their Soundcloud, embedded below.

Give it a listen – and you can visit their site for more music or subscribe to their podcast through iTunes. As far as who the creators of the site are and what it takes to be a smuggler, I’m pretty unclear about. But I am clear about Curry Smugglers having music potential and it being a new site to keep an eye on into the future. END_OF_DOCUMENT_TOKEN_TO_BE_REPLACED

Longest-ever post title? I dunno, friends. So, you may have heard a teensy weensy leetle bit about the Indian ambassador to the U.S. getting singled out for some TSA TLC because she was wearing “the traditional Indian garment.” If you didn’t, read Pavani. I’m not here to comment on the Mississippi Masala. (Oh, come on, no one’s said that one yet and my better self gets tired sometimes.)

Anyway, I’m here for THIS: 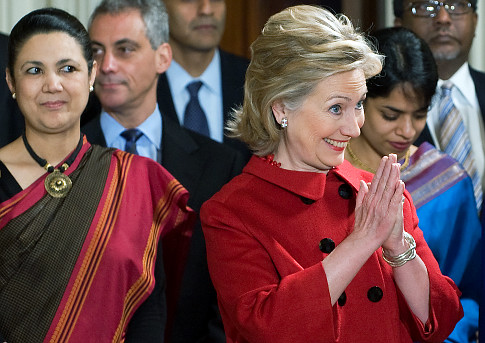 Look at it. Blink. Yes, it’s really there: THAT is the photo the NY Daily News used to illustrate their sari patdown story. I don’t know which is better–the expression on Hillary Clinton’s face or the expression on Meera Shankar’s. Either way, it made me laugh out loud. Well spotted, Vivekster. And well chosen, NY Daily News photo editor.

Caption contest time! “Surely you can think of some puns yourself,” you say? I want yours. And don’t call me Shirley. END_OF_DOCUMENT_TOKEN_TO_BE_REPLACED

We have been experiencing some technical difficulties with our server. They should be resolved now. We are not sure if we were targeted by WikiLeaks hackers, but we were able to defend ourselves and restore everything back to normal. Looks like we have to hire more security around the bunker.

Please let us know if you continue to experience any problems. Thank you for your patience. END_OF_DOCUMENT_TOKEN_TO_BE_REPLACED

It might be that Pakistan is just more clever about how to deal with Wikileaks than other governments. What do you do when a large number of Wikileaks makes your government look weak, corrupt and inept? Make up something even worse about your rival so the people can focus their attention elsewhere. In the case of Pakistan, they have decided to inform their citizens about leaked information from the U.S. government about India:

They read like the most extraordinary revelations. Citing the WikiLeaks cables, major Pakistani newspapers this morning carried stories that purported to detail eye-popping American assessments of India’s military and civilian leaders.

According to the reports, US diplomats described senior Indian generals as vain, egotistical and genocidal; they said India’s government is secretly allied with Hindu fundamentalists; and they claimed Indian spies are covertly supporting Islamist militants in Pakistan’s tribal belt and Balochistan.

If accurate, the disclosures would confirm the worst fears of Pakistani nationalist hawks and threaten relations between Washington and New Delhi. But they are not accurate. [link]

This morning’s stories disparaging Indian generals – one is said to be “rather a geek”, another to be responsible for “genocide” and compared to Slobodan Milosevic – is counterbalanced by accounts of gushing American praise for Pakistan’s top generals. [link]

A “geek?” Oh, no he didn’t. This was actually pretty predictable. In an era where we have a ton of information at our fingertips, we also have a ton of misinformation there as well. Conspiracy theories abound, both abroad and at home. The cables themselves are a mix of the objective and subjective to begin with. Therefore, “truth” belongs to he who best gets his message out.

END_OF_DOCUMENT_TOKEN_TO_BE_REPLACED 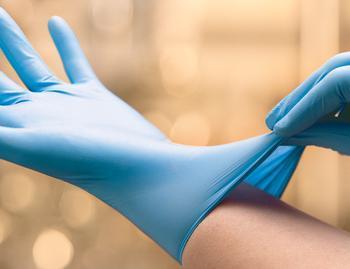 Do you know someone who prefers to wear saris everywhere? One of my aunts wore a sari every day to work in downtown Los Angeles and post-retirement, I hear that she’s only been spotted in non-sari clothes while attending a local yoga class. When I heard about the new federal guidelines for screening air travel passengers, I wondered how she might fare and feel if she’s chosen for an enhanced pat-down at an airport the next time she travels to Georgia to visit her daughter and family.

Mississippi is not Georgia, but Indian Ambassador Meera Shankar’s recent pat-down experience at a Mississippi airport which had no body scanners may shed some light on what it’s like across the U.S. under the new federal guidelines for women who wear saris while traveling (WWWSWT). I suppose WWWSWT could include any of us who wear saris if you’re on a really tight schedule and flying to or from a wedding, for example. But I’m guessing they are more likely to be women like my aunt who simply prefer to wear saris all the time.

END_OF_DOCUMENT_TOKEN_TO_BE_REPLACED

Even though we may recognize Ajay Naidu for his comedic talent, particularly in his breakthrough cult classic Office Space, his latest film Ashes takes us on a more serious journey. For this indie-flick in which Ajay writes, directs and stars in, the film deals with heavy topics such as mental health issues, growing up in a hyphenated culture, and survival. The film premiered in New York City last month and will be making the indie-film circuit this upcoming year.

I haven’t seen the film yet, but would be interested to hear what people thought who were able to make the premiere for the film. Here’s what Abdullah at MTV Desi had to say:

[Ajay] is Ashes (short for Ashish), an Indian New Yorker charged with caring for his mentally ill older brother Kartik (Faran Tahir) who is fresh out of a care facility. We follow Ashes as he rejects the conventional path of working at an Indian restaurant and instead pursues his chosen hustle, the weed game….Though his drug dealing career is boosting his income, with money comes trouble, and soon Ashes is embroiled in a chess game between high-powered drug dealers. Ashes, who vows only to deal with marijuana and no harder substance, finds himself an accessory to the heroin trafficking. As the stakes rise, so does the number of people involved, complicating the story.

While Ashes and Kartik’s relationship tugs at the heartstrings, the drug game described in Ashes at times becomes cumbersome under the weight of its characters…Moreover, it becomes hard to believe that the business of moving high grade marijuana in New York is under the control of armed South Asian gangsters. [mtvdesi]

To abate my curiosity, I asked Ajay Naidu himself some questions about his making this film, what it means to be a South Asian actor this day and age and creative process. Check out my interview with the poignant Ajay Naidu below.

Taz: You are one of the most recognizable South Asian actors in the US, notable for picking roles where you are hilarious. Most people recognize you as Samir from Office Space though I personally adored your role on American Chai. This film, Ashes, is on the more serious side covering a grittier life story. Do you think the shift from comedy to serious was particularly sudden? How do you think the film will be accepted by your fans who are used to seeing you in comedic roles?

Ajay: It’s a strange thing to think of being called strictly a “comedic” actor. That’s a brand that other people put on actors. I grew up acting in the classical theater playing all kinds of roles not strictly related to funny or humorous subjects. It’s not a “shift” – it is a logical progression for a normal actor to take on roles that challenges them. Actually, the only other time I was noticed for a serious actor, I was nominated for the Independent Spirit Award for my role in Suburbia. That was a very, very serious role.

T:You not only co-wrote this film, but you also directed and star in it as well. What is the story about and why did you feel it was an important story to tell?

A: This story is about a small time drug dealer who takes care of his mentally ill older brother. I felt it was important to tell this story because I lost my sister to manic depressive schizoid disorder. I wanted to share that story with others who have suffered through similar losses and to discuss the subject through a modality wherein I could be as honest as possible about it. Film is that mode. END_OF_DOCUMENT_TOKEN_TO_BE_REPLACED

Does the multi-armed dance move ever get old?

Looks like there’s a new Desi gal hitting the airwaves and “flexing” her way into the spotlight. A Punjabi Sikh Calgary Canadian, Kiran, aka “K”, got her start as a dancer, went on to be a VJ host on South Asian television shows, and eventually met the right people to get her roped into the music making world. She sounds a little like Kei$ha, a pop version of M.I.A. and a little like….Anjulie on crack.

After much success worldwide, J2 is currently working on his own Artist K. Her debut single ‘Chokolate Soda” and Video teaser released virally in Nov 2010 and have been creating waves in the music industry. She is also featured with LL Cool J on his new single ‘Mikrofone’. [prlog]

Hmm. What do you think? Is K so Alt-Desi that she’s full circled to Jay Sean level Desi-Pop? END_OF_DOCUMENT_TOKEN_TO_BE_REPLACED