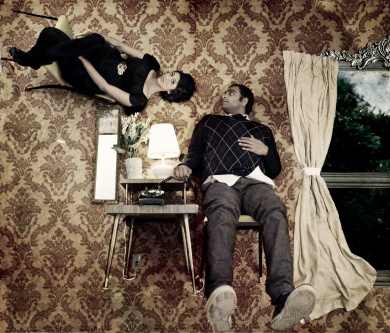 Remember during the third season of NBC’s The Office where Michael Scott and the gang went to a Diwali celebration with Kelly Kapoor and her family?

Kelly’s dad: How long have you been married to the cheerleader?

Michael Scott: Oh, she’s not a cheerleader. She thought this was a
costume party. Um, no, we’re not married…yet.

Kelly’s mom: She is very fair.

That scene served as inspiration for brother-sister dream pop-duo Anand Subramanian and his sister, Arthi Meera (as Taz blogged last fall). When the two moved to L.A. in 2007 to make music, they chose Fair and Kind as their group name. Recently, I interviewed Anand via email for MTV Iggy and thought I’d share an excerpt with you Sepia folks – first because we’ve blogged about them before and second since the two will be performing at UNIFICATION 2010, in August, an event I’m working on in collaboration with BROWNSTAR and hope to see you many of you attend. In 2008, you self-released your debut album A Little Past Twilight. According to your website, your second album is tentatively titled Light Music Program. When do you hope to release that?

Why did you feel it was important to be involved in UNIFICATION 2010?

Anand: I think it’s important to work towards building South Asian solidarity and I love the idea of South Asian artist showcases. Part of the reason we decided to move to LA to start Fair and Kind back in 2007 was to try and collaborate with the community of talented South Asian artists we knew there.

Anand: It’s just us two, but we have an extended family in Chicago (cousins, etc.), who are all musically talented. We’d like to get them involved with the recording of the 2nd album, but we’re still working out the details.

What do your parents think about your music? Do they come to your shows?

Anand: Our parents are supportive in every way. In 2009, we played our only show in Chicago (where they live), and they were at the very front, even though it was super loud.

You both live in separate cities. How do you still manage to collaborate on your music?

Anand: The internet has been very helpful. We record ideas at home and send them back and forth. We’ve also been lucky enough to travel to each others’ cities (Chicago and Oakland) a few times to work on stuff. The first album was written and recorded when we both lived in LA, so it’s still a process we’re trying to figure out.

How will your second album differ from your first?

Anand: I don’t think there’ll be a radical departure in sound, but we want to try and capture some of our favorite things about the ’80s and ’90s Tamil film music we heard when we visited India and somehow incorporate those things into the album. This process will probably be explicit on some songs and more subtle in others.