Yesterday, you saw Part I of my conversation with jazz pianist Vijay Iyer (who, by the way, is playing at Birdland again tonight!). Herewith, Part II!

VVG: What does it mean to be someone not only interested in making art, but also in articulating what it means? How did you get into writing? In a dialogue with your longtime collaborator, the saxophonist Rudresh Mahanthappa, you talk about being accused of being “full of words and full of himself.” (I have some sympathy with this, having once been described as “fast-talking.”) You say, “But I felt like, either frame the discourse with your own language, or else let them take it over and completely misrepresent you.” Does this get at why you chose to take on writing as another facet of your career? To what extent do you feel that you are required to explain yourself, your philosophies of work and your work itself more because you are South Asian?

VI: I didn’t frame myself as a writer at first, but I’ve been publishing things here and there, first in academic journals, then in anthologies, then in some online media, and then in print magazines. Most of it has been by invitation, and the last few times I even got paid, so I guess that clinches it!

But seriously, I think the space where I’ve strived to produce specific discourse about identity was in the liner notes to my albums. I’ve always taken this task upon myself, sometimes to people’s dismay. (The “words and himself” quote was from a prominent jazz critic who actually likes my music.) I think of it as a textual counterpoint to an album, or as a letter to the future. But also it’s a rare opportunity to reach a captive audience; people don’t necessarily intend to read anything when they buy an album, but now they’re going to have those words in their hands every time they take the CD off the shelf. (At least that used to be the case when people still bought and listened to cd’s!) So it becomes a way to reach thousands of people over many years. People who revisit the music will at some point revisit the words.

I did find that I had to contextualize the music and my relationship to it. For all the rhetoric of tolerance and inclusiveness, there are some things that just don’t go down easy for Americans, and a South Asian American jazz composer-pianist is one of those things. It also doesn’t go down easy for jazz audiences, or other South Asians, or for people in general!

It’s never enough just to solve the problem internally for yourself. You’re always encountering people who are at some other point in the journey of awareness, and so you are constantly re-solving it for someone else. So that discourse becomes pretty crucial; fragments of it are going to keep coming back into the conversation.VVG: I was interested to read about your internal debate over the category of jazz in All About Jazz. In the same piece, you write about the need for creative risk-taking. Can you talk about the risks you took with “Historicity”? How has your risk-taking evolved over the course of your career? How does one make creative risk real, when, as you note, jazz–among other art forms–is no longer primarily animated by the “life and death stakes” that led to its beginnings?

VI: At some level it’s always a risk to put some piece of yourself out into the world. And it’s also a risk to be in the marketplace as an artist. It’s like being on a job search 365 days a year. “Every day I’m hustling…” Things have sort of stabilized, but it’s still a constant nuisance to confront your own “worth” in the marketplace – when you know that this is a quantity that is fueled by fundamentally irrational forces, like desire. 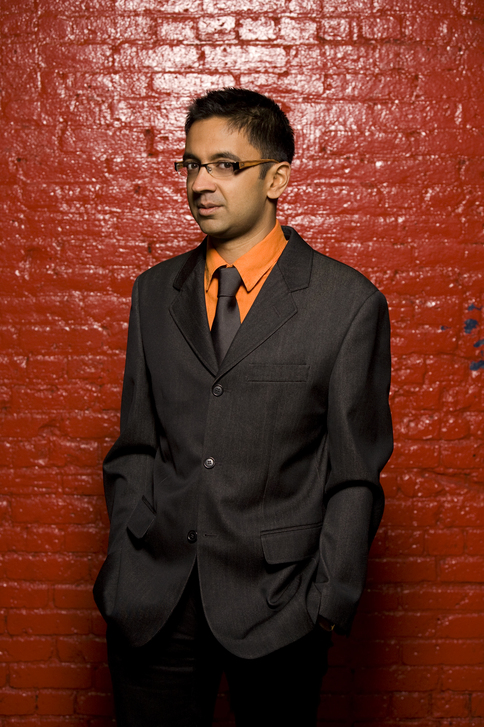 photo to right by Jimmy Katz

That album was seen as a risk for me because, as the NY Times wrote the other day, I was “interrogating the very notion of a covers album.” Really I was just making a piano trio record with some covers and some originals–as did about a thousand other people in 2009–but somehow with me the stakes were seen as higher, the ironic distance greater, the concept heavier. It ended up that critics really liked it–but I wonder if part of the subtext was the element of surprise: “Hey, that Indian jazz nerd actually makes enjoyable music.” Or it may have just been finally ok to accept me as part of the mainstream, in the same way that it’s now ok for all these desis to be on television.

For me the risks taken with that album really live in the moment-to-moment improvisations. In jazz, you could say, improvisation is performative–it creates a real-time dynamic of risk and reward. How to make that risk “real” in 2010 is a question plaguing the jazz world.

VVG: And in the same article, I’m fascinated by this quote: “I am generally unable to listen to music as “pure sound (I don’t actually believe that this is possible). I listen instead for a certain narrativity in the music, a sense that it came to us from somewhere, along some interesting and perhaps arduous path–audible traces of an authentic life on earth.” What does it mean to be authentic? If you were to describe the narrative in “Historicity” in prose–the plotline, so to speak–what might it be?

VI: Who knows what it means to be authentic! I sure don’t. But sometimes you hear someone and you believe that he or she really means every single note, every lyric, every sound. Thelonious Monk, Billie Holiday, and John Coltrane had it, and some elders I’ve worked with (Wadada Leo Smith, Amiri Baraka) have it, and some MCs I like have it – (Black Thought, Jay Electronica). I think M.I.A. has it in her visual style and in her production style. I think my collaborator Mike Ladd can conjure it at a moment’s notice. I think the drummer in my trio, Marcus Gilmore, has it, and so does his grandfather, the legendary Roy Haynes. It’s a quality that people crave.

Ideally the narrative of “Historicity” is multifarious enough that a lot of people can enter it. You have the story of me, a perceived outsider, positing an alternate history of the last half-century of music. There’s a narrative of tribute to underrated jazz masters (Andrew Hill and Julius Hemphill), interventions on a couple of pop songs (“Somewhere,” which old white people know, and “Galang,” which young brown people know), and old soul songs (“Big Brother” and “Mystic Brew”), which open up connections to hip-hop (especially since the latter was sampled by A Tribe Called Quest). And there’s the narrative of the band itself, which shares nearly a decade of history and embodies a diversity of origins. And finally there’s the fact of it being actually enjoyable to listen to, which maybe helps someone accept your narrative of choice.

VVG: In that conversation with Rudresh Mahanthappa, you refer to the dangers of self-exoticization, and your perception of yourself as an outsider in New York’s desi arts scene, as well as some frustrations with both South Asian and mainstream communities as audiences for your work–looking for “South Asianness” or “Indianness” in it in ways you found too simple. Have your feelings about these things changed at all since that conversation? How does audience matter to you now?

VI: I think that we’ve all changed. The community has reached a critical mass and a comfort level where we now have multiple models for how to be desi. There are all kinds of desis in American culture now: artists, activists, musicians, authors, tv and movie stars, comedians, politicians, and of course the more “traditional” careers. I think the privilege of being complicated is something we had to rise up and claim. It took us a few decades, but we’ve done it. Now I feel less pressure to be Indian in the more obvious ways, even as I’m always (at least in my head) sending the community little secret shout-outs – such as that M.I.A. cover…!

Updated: Both this and the previous post about Iyer have been edited so that if you buy Iyer’s work through this site, SM will get a small cut (which Abhi uses to offset server costs).

10 thoughts on “In Conversation With Vijay Iyer, Part II”