I live in Washington, D.C. 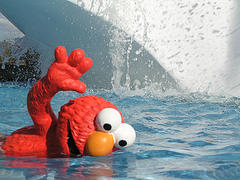 I have lived here since I moved to this great city from my native California in 1999, to attend graduate school. Back then, I went home at least twice a year; between Priceline.com’s $125 roundtrip fares and living three miles from Reagan National Airport, flying to NorCal was as easy as taking the “Metroliner” to New York City. I loved traveling. I loved the excitement, the anticipation, the permission I gave myself to buy mind-rotting magazines and over-priced candy from Hudson News, right before sauntering up to my gate.

Traveling was no longer glamorous and thrilling, it was fraught and terrifying. Was it going to happen again? How could we stop it? How do you protect a massive, liberty-loving nation from crazed zealots who are willing to sacrifice their own lives for some twisted ideal?

Security. Lots and lots of security.

Lining up to be screened for hidden box-cutters or submitting to more thorough searches through our baggage made sense. We were trying to protect this country. We kept repeating, “Never again.” But somewhere between justifiable caution and utterly comprehensible fear, common sense was lost. What replaced it was an obtuse over-reliance on the obvious– but not your obvious or mine, no. It was the “obviousness” of the ignorant which suddenly became a battering ram of blunt discrimination used to profile, persecute and pervert. I kept flying home, but now it took hours. Hours to get through security. Hours stuck during layovers in random cities. Hours to get to and from the airport, because my Mother was no longer able to pull up to a curb and wait five minutes for her child to leave baggage claim. And when I did leave baggage claim, I did what I always had– I rushed in to her waiting arms to be held, except now, instead of mutual joy, I was looking for comfort.

“They pulled me out of line and checked me TWICE”, I’d howl. And the more often it happened, the less I wanted to fly, anywhere. Watching everybody else get on a plane EXCEPT for the vaguely brown-looking people was depressing, then infuriating. When concerns were raised initially about how racist TSA’s procedures were, how discernment had been replaced with straight-up discrimination, things got worse, in my experience. I still got pulled out of line, but so did an 89-year old WASP in a wheelchair, in considerable pain, who was flying home to die. Watching TSA brusquely shove him around in his chair, looking for a weapon he was presumably sitting on, while he trembled broke my heart. Yes, this was justice indeed. Now the “extra screenings” were being conducted on brown people and the vulnerable, common sense be damned. I thought of all of this because I read this:

Azaad Singh cried when he entered the glass enclosure at the Fort Lauderdale, Fla., airport for extra screening.

He was patted down. His bag was searched. And then the security officer went through his prized possessions: his first Elmo book, his second Elmo book, his mini-mail truck.

Azaad, whose name means “freedom,” is an American and a Sikh.

Because all Desis are barely two degrees apart, I think I have seen pictures of this child on Facebook. That made it even harder to read this news story, because my brain immediately fleshed out a grainy mental movie, starring this baby. I could picture him scared, crying and confused, and my heart cracked a bit. No, it’s not going to ruin his life and I’m sure he’s recovered quickly and is doing well. But I can’t help but hang my head in sorrow for the path this country is on, for the choices which are being made which result in “Security Theater” vs. actual security. Part of me wants to cry for Azaad, because he’ll never know the America that I grew up in, that I enjoyed for 26 years before everything went horribly wrong. I know, the correct response to this maelstrom of feelings is to get motivated, to get up, stand up, and shout for change. I’m willing to do that, but I’m also grimly aware of how much work it will take– and how little will come to us, as a result of it. I have the right to be dismayed. I don’t have many rights left. I’m keeping that one.

Azaad’s father, Amardeep Singh, told a House hearing Thursday that he’s not sure how he’ll one day explain to Azaad why he and his Sikh family seems to always need extra screening. [AP]

Now just to be clear– this is not our Amardeep Singh, who blogs at Sepia Mutiny and also has a precious toddler son. I don’t want to confuse anyone.

I can’t imagine how he’s feeling. I fly (ha.) in to a livid rage when a dog bullies my puppy at the dog park. I can’t fathom what feelings churn within when it is your baby being intimidated.

The House Judiciary civil rights subcommittee is exploring potential legislation to stop racial profiling. Witnesses proposed that Congress require studies to document how often particular groups of victims are stopped or arrested and whether they were threats to the United States. Legislation also should provide for legal redress for those who were wronged.

Witnesses told the committee that profiling remains a national problem for African-Americans; Hispanics are increasingly victims, especially in states and communities that have cracked down on illegal immigrants; and, since Sept. 11, 2001, Muslims and Sikhs have been regularly targeted.

“It’s not fair. It’s not safe. It’s not American,” said Singh, who was returning from a family vacation in Mexico two months ago when the incident occurred in Fort Lauderdale. He’s director of programs of The Sikh Coalition. He testified wearing a traditional Sikh turban. [AP]

He’s right. It’s not fair, it’s not keeping us safe and it’s not American. And poor little baby Azaad deserves more than this depraved reality show he was forced to star in, at the airport.