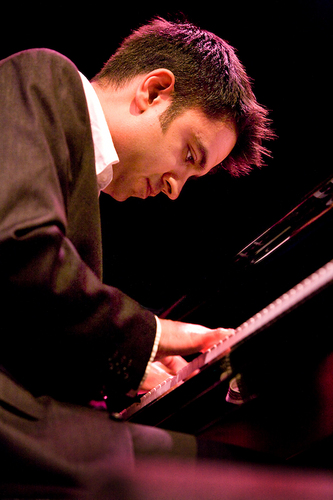 I have the album and love it and wanted to chat with him for the Mutiny; he was gracious enough to agree, and so here, in the first of two parts, is our conversation (which we did online).

(Tracks that are likely of special interest to some Mutiny readers: This track, a cover of M.I.A.’s “Galang,” has deservedly gotten lots of attention. An earlier album, Tragicomic, features a track called “Macaca Please.”

VVG: It’s been so exciting for me to watch your success, especially this year with “Historicity.” My older brother and I both played tenor saxophone relatively seriously when we were younger… Today, coincidentally, I am going to practice again for the first time in years! Your website describes you as “self-taught.” How do you teach yourself/practice? What’s your routine/process? How does your day as a musician work (when you’re not touring)?

VI: Thanks, Sugi! I am honored.

I’ve mostly grown musically over the years by trying new things. Sometimes that means trying to work through some existing musical idea that challenges me, and doing it very slowly; other times it’s about composing challenges for myself to try to play; still other times it’s through collaboration with others, whether in my area of music, in other areas of music, in other artistic fields like poetry, film, and theater, and even in less arts-oriented disciplines like the sciences. I don’t have much of a routine because I find every day is different – but my basic way of learning anything is by working on something for long enough that it’s not “practicing” anymore. As a player, I mostly practice being spontaneous; I practice improvising.

As for my day-to-day when I’m home, I spend an unwanted number of hours each day on business matters – emails, phone calls, paperwork, logistics. But I manage to make music every day, either playing or composing. And I spend as much time with my family as I can, especially my 5-year-old daughter.VVG: Sepia Mutiny readers have always been particularly interested in South Asian-Americans pursuing what some of us call non-traditional careers. You’re not a doctor, lawyer, or engineer–but the Vijay Iyer Wikipedia article (to cite one example) describes you with six job titles: pianist, composer, bandleader, producer, electronic musician, and writer. They could add teacher or scholar to that too! How did your family react to your professional goals? What challenges did a South Asian background pose on your road to this multi-faceted musical career? Alternatively, what advantages did it afford?

VI: It was hard for me and for my parents when I made the choice to be a musician, partly because I made it relatively late (23) and after trying a lot of other stuff first (undergrad and masters in physics, for example). It was hard to make a clear case at the time, but things built up little by little, and now I look back and have done all these seemingly disparate things. I think that those “job titles” are all facets of what an artist does anyway – they’re all interrelated. I compose, I perform with my ensembles, I make albums, and I occasionally get to write about music. I think the simple truth is that an artist’s life is really that demanding, in at least that many ways.

I get asked a lot about about the challenges and advantages of being South Asian and doing what I do. In some ways they’re two sides of the same coin. Jazz has historically been discussed literally in black and white, and prior to our generation coming of age, there were no real precedents for people like us in jazz (or in American music at all, or in American culture at all). So that has made me a new, unknown quantity, which was perhaps a tactical advantage in some ways – maybe it just helps to be the first at something.

That said, there has always been an imperative to resolve the “Indianness” question – to answer the implicit question, how Indian are you? I want to use art to re-ask and to complicate that question, not to answer it.

I constantly get asked, Are you influenced by Indian music? But that’s usually based on a naÃ¯ve understanding of Indian music. The real question seems to be, where are the sitars and tablas? Where is the Bhangra or Bollywood? If I say that I’m influenced by rhythmic structures of Indian classical music, that’s already over the heads of many critics and audiences.

Another challenge is that what might be unique or different about me is often initially attributed to my Indianness — coded as foreign and hence unintelligible — and not to the music that already exists in America. It’s rare for someone to connect the dots between me and my biggest influence of all, Thelonious Monk, because people so often first see difference. So they’ll say instead that I’m “intellectual,” “complex,” “dissonant,” and so forth. It’s like my friend Pamela Z said: “When people can see you, they hear something else.”

VVG: You’re known as a polymath, with degrees in math and physics, as well as technology and the arts; you’ve worked with visual artists and poets, as well as other musicians–your range is famously broad. How do you balance all these projects and interests? How do they feed into your music? Have you ever been surprised to realize that something had become a musical influence?

VI:The reason any of it is there in the first place is that unlike a lot of people in jazz today, I didn’t go to music school. So instead of spending my formative years holed up in a practice room trying to play things faster and faster, or scheming about how to make it in the music business, I just got into a lot of different stuff when I was a teenager: yes, physics and math, but also critical theory, cultural studies, contemporary art, literature, and theater. I was more and more serious about jazz but I also loved rock, soul, hip-hop, and dance music, and I’d studied western classical violin for fifteen years. And later, in my 20s, I stumbled into ethnomusicology, cognitive science, and computer music, and started trying to learn more about Indian classical music, African music, the African-American avant-garde, and just anything else I could get my hands on. I didn’t really know to what extent I would eventually make music my life. Maybe I studied all that stuff because I didn’t know if I’d ever have a chance to really be an artist for life. And then, it just sort of happened: little by little, I became an artist, and (particularly after I moved to New York) stopped trying to be anything else.

I guess my point is that I’m not trying to force these other influences into music; I’m just being honest about who I am. I realized sometime in my early 20s that if I was going to keep making music, it had to authentically reflect me as a person, my reality and what’s happening around me.

As for how I balance it all, I think it’s mainly a matter of life being long, and me being sort of a restless person. I’ve been lucky in my life to intersect with a lot of different interesting folks, and it’s really these associations with people and their knowledge that drive the work.

Tomorrow: Part II. In the meantime, you can watch a bunch of live performances on Vijay’s YouTube channel, plus (above) a video about the album. Or go see Vijay at Birdland in NYC tonight!

2 thoughts on “In Conversation With Vijay Iyer, Part I”