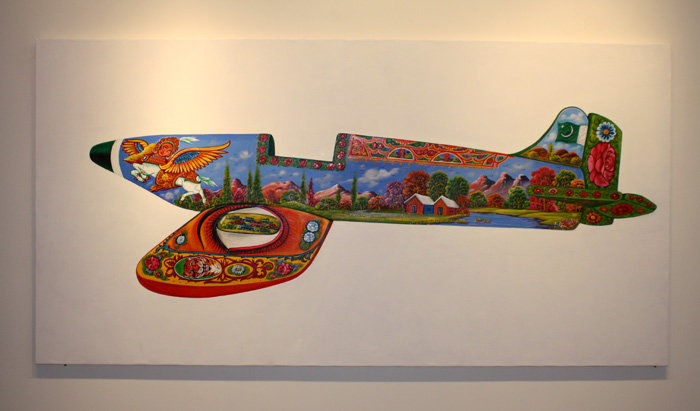 Objects are like people: they can tell you where they come from. I count objects that look desi. Look at the plane above. You have probably seen that art on trucks in places like Lahore or Ludhiana. It might be two in the afternoon. It is hot and dry around you, the man selling sugarcane juice is sleeping in the shade of a tree, and there’s no one else around. Your shadow is the smallest you’ve ever seen in your life. And then a truck comes to a stop beside you. The exhaust pours out as if from a chimney in a brick kiln. If you look past it, however, you see painted on the side of the truck, a landscape that includes snowy peaks, colorful huts, cool skies, fields brimming with flowers that will live longer even than plastic. Folk utopia!

Now, what happens when that painting is transposed on to the body of an airplane? The wish for flight becomes literal as a vehicle for the imagination. I imagine this make-believe airplane as a prop in one of those old-fashioned studios, the kind where couples stand in front of the backdrop of a waterfall. The painting touches me by its use of color, and its playfulness. It is the work of Sana Arjumand, a highly talented Pakistan-based artist whose paintings are on display at the Aicon Gallery in New York.

The other works on display convey the same visual wit–and verbal wit, too, if you think about the titles. For instance, “Let’s Give Each Other Space,” in which fighter aircraft draw heart-shaped patterns in the sky. I read it as a wry comment on the militarism in Pakistan, and the fatal love with its heavily-armed neighbor, India.

Arjumand’s representation of issues of identity, the ways in which they relate to gender or religion, are poignant and recognizable. Consider her works “Then Their Shadows Fell From the Sky” and “A Hundred Thousand Years of Growing Beards.” A part of the appeal of this work is that it addresses pressing contemporary realities: I delighted in them, but I was also disturbed by the easy familiarity. It reminded me of what I feel when I read a lot of South Asian fiction: on the one hand, there is the thrill of seeing real life represented on the printed page, and, on other other, there is the fear that the writer is turning an event into a symbol. Which is to say: even as I’m engaged by Arjumand’s obvious preoccupation with, say, Islam and the role of women in Pakistani society, I’m slightly turned off by her ready abstractions, the use of the crescent or the burqa or the iconic stars.

In a statement that I read online, Arjumand’s colorful airplane was described in the following manner: “Sana covers her airplane — so often associated in a post-9/11 society with the shadow fear of terrorism — with the same religious and patriotic imagery which decorate South Asian cargo trucks, subverting the shadow paradigm with playful images that invoke a spiritual path — the term Mairaj referring to the invitation from the divine to ascend the self and experience the pure essence of being…” I prefer my own reading, where I link the plane to the prop in the studio in the small-town in South Asia. In my reading, the airplane is closer to the ordinary experiences of the people around the artist. In contrast, the reading that I have quoted above, by situating the painting in the framework of 9/11 life, makes everything that is done by desi artists and writers only an extended conversation with the West. We begin to speak only in the idioms that the West itself grants us. To do so is wrong or reductive because it makes terror the only reality of desi lives. The West never was, or should be, our sole interlocutor, and the readings we do of our books and our art should attempt to multiply, rather than simplify, our complexities.