I know this news is more than a month old, but the charges against actor Kushboo dragged on for so long that I think it’s perfectly acceptable to drag on their well-deserved death. You might have heard that late last month, the Indian Supreme Court quashed all defamation charges against her. It was alleged that in a 2005 interview with the Tamil edition of India Today, Kushboo denigrated the good name of Tamil women by insinuating that they all have sex before getting married. For this, she was lampooned in the Tamil press, and there were street protests in Tamil Nadu – one particularly memorable for a donkey bearing her name.

First, a wee bit o’ background. Kushboo is a star of Tamil film and more recently television. Those in the know will relish taking apart the previous sentence in the comments section as the understatement of the year. They are welcome to. I will simply say that both of my grandmothers watched her serial “Kalki” and watch her weekly quiz show “Jackpot” – brought to you by Arokya Milk – with a devotion not seen since… dare I say Doordarshan’s Ramayana? 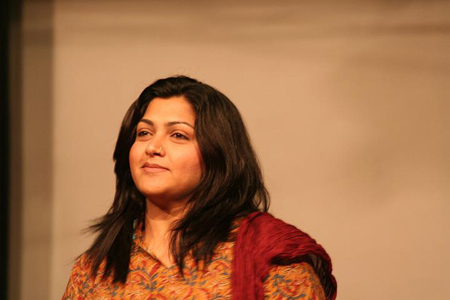 The big stink started with India Today’s 2005 annual issue on SEX – the most blatant attempt to boost ratings since… dare I say Doordarshan’s Ramayana? (Kidding, kiddiiiiing). The issue features a sex survey, and each year is different. The theme of the 2005 survey was “Sex and the Single Woman.” The Tamil edition of India Today interviewed Kushboo for the issue and the dignity of Tamil women hasn’t been the same since. I can’t find anything on India Today’s site (so I don’t know if what I’m giving you is the real deal), but here’s a version of the interview which the author transcribed. I humbly offer the following translation. Please feel free to correct.

In the matter of women expressing their sexual desires, Chennai was lagging behind Bangalore. Now women in Chennai are overcoming taboos regarding sex. We see many women in pubs and discos. Women are able to speak openly about sex. Woman is slowly starting to take wing and fly from this caged Indian society. Even so, incidents like what happened to Stephanie raise the question of whether or not this trend is healthy. At the same time, sex education in schools is a necessity. Even if schools don’t teach it, parents should teach their children the basics of sex.

As far as I’m concerned, sex is not just about the body; the mind is mixed in with it. I’m unable to comprehend how a woman can change boyfriends from week to week. When a girl is serious about a boy she can tell her parents and go out with him. When their daughter is in a serious relationship, parents should approve of it.

Our society needs to be freed from the idea that a woman shouldn’t lose her virginity before marriage. Not a single educated man expects the woman he marries to be a virgin. But women who have pre-marital sex should use protection so that they don’t become pregnant or contract a sexually transmitted infection.

I married the man I loved. Because we were certain about our relationship, we lived together before we were married. It has been six years since we got married. Our responsibilities have increased since having two children. Because our children sleep in our room, we have to set aside time for ourselves. Even so, we lead a happy married life. A married man and woman should know how to satisfy each other’s physical desires. Happiness is in satisfying each other. If the two people understand their sexual desires, there won’t be marital problems.

Some couples get their kicks from sex books and movies. You can’t say that’s wrong. At the same time, two people need to recognize each other’s likes, dislikes, comforts, and discomforts. If women talk about their sexual desires, those who see this/them as wrong need to change their outlook. Sex requires mutual consent.

After the interview ran, a couple of Tamil dailies ran stories claiming that Kushboo had questioned the honor and chastity of Tamil women, and that’s when all hell broke loose. The newly-formed Tamil Protection Movement (an alliance of S. Ramadoss’s Pattali Makkal Katchi (PMK) and Thol. Thirumavalavan’s Viduthalai Chiruthaigal Katchi (VCK) – which alliance seems to do nothing more for its constituents than get them riled up for Culture Wars, but more on that in another post) took to the streets. Additionally, a member of the women’s wing of the PMK filed defamation cases against Kushboo:

According to the PMK’s Central Chennai district women’s wing secretary, Deepam Jayakumar, Kushboo’s interview had caused anguish and mental agony to her and other women in the State. She said the remarks undermined the culture and civilization of Tamils and it derided the pride of the petitioner and other Tamil women (The Hindu).

I could go on, but suffice it to say that there were a bunch of people angry about what Kushboo hadn’t really said, and may or may not have been equally as angry if they’d known what she’d actually said. Fast forward to the present, when Kushboo’s appeal to dismiss the 22 defamation cases against her finally reached the Supreme Court (the Madras High Court had chickened out, deciding that the matter was best left to a trial judge). The cases were brought under Sections 499 and 500 (defamation) and 504, 505 and 509 (criminal intimidation, insult, and annoyance) of the Indian Penal Code, as well as Sections 4 and 6 of the Indecent Representation of Women (Prevention) Act. Here’s the Supreme Court’s judgment (pdf).

In the proceedings before us, Ms. Pinki Anand, learned counsel appearing for the appellant, has submitted that the complainants (respondents in these appeals) were not ‘persons aggrieved’ within the meaning of Section 199(1)(b) Cr.PC and hence they were not competent to institute private complaints for the alleged offences. It was stated that the appellant had made a fair and reasonable comment as a prudent person, and therefore, the opinion expressed by the appellant is fully protected under Article 19(1)(a) of the Constitution of India which guarantees freedom of speech and expression to all citizens. Furthermore, it was contended that even if the allegations in the various complaints are taken on their face value and accepted in their entirety, the same do not disclose any offence whatsoever and the opinion of the appellant does not, by any means, fall within the ambit of Sections 499, 500 and 505 IPC or Sections 3 and 4 of Act 1986.

In response, Sh. Kanagaraj, Sr. Adv., Sh. S. Gowthaman, Adv. and Sh. B. Balaji, Adv. appearing for the respondents, submitted that since the High Court has refused to quash the complaints, this Court should not interfere either since the complaints require determination of factual controversies that are best left to be decided by a court of first instance. They have asserted that the complainants in these cases are mostly women belonging to Tamil Nadu, who were personally aggrieved by the appellant’s remarks. It was argued that the endorsement of pre-marital sex by a prominent person such as the appellant would have a morally corruptive effect on the minds of young people. Her statement would definitely obscure some basic moral values and expose young people to bizarre ideas about premarital sex, thereby leading to deviant behaviour which would adversely affect public notions of morality.

There can be no quarrel about this Court’s competence to quash criminal proceedings pending before the subordinate courts. However, this power must be exercised sparingly and with circumspection. In light of the position summarized above, we can examine the present case with two considerations in mind, namely whether the allegations made against the appellant support a prima facie case for the offences mentioned in the respective complaints, and whether the complaints were made in a bona fide manner…

We must also respond to the claim that the appellant’s remarks could have the effect of misguiding young people by encouraging them to indulge in premarital sex. This claim is a little far-fetched since the appellant had not directed her remarks towards any individual or group in particular. All that the appellant did was to urge the societal acceptance of the increasing instances of premarital sex when both partners are committed to each other. This cannot be construed as an open endorsement of sexual activities of all kinds.

This takes us to the question of whether the impugned complaints were made in a bona fide manner. As we have already noted, most of the complainants are associated with the PMK, a political party which is active in the State of Tamil Nadu. This fact does add weight to the suggestion that the impugned complaints have been filed with the intention of gaining undue political mileage…

Coming back to the facts of the present case, the complainants have alleged defamation in respect of imputations against the character of Tamil-speaking women, which could perhaps be viewed as a class of persons… What is interesting to note is that not all of the complainants are women, and in fact almost all the complainants are associated with a particular political party…

We are of the view that the institution of the numerous criminal complaints against the appellant was done in a mala fide manner. In order to prevent the abuse of the criminal law machinery, we are therefore inclined to grant the relief sought by the appellant.

BOOM BOOM DISHOOM DISHOOM! The Supreme Court not only says that Kushboo’s speech is protected, but that complaints against her were brought in a mala fide manner. Take that, Culture Warriors! Maybe you can get back to representing the people who elected you to make their lives better!

Speaking of which, what does a relieved Kushboo do after her victory over the politically motivated complainants? Why, join politics, of course!

Actor Kushboo joined the Dravida Munnetra Kazhagam in the presence of party president and Chief Minister M.Karunanidhi at the party headquarters, Anna Arivalayam, here on Friday…

Ms. Kushboo said as she was attracted by the DMK’s ideologies and its commitment to women’s empowerment. Various welfare measures implemented by the party had made her join the party. Asked whether she would continue to express her opinions freely, Ms. Kushboo said she would be cautious in making speeches because whatever she said would be linked to the party (The Hindu).

Sigh. Oh well, it was good while it lasted. But agreeing to toe the party line doesn’t take anything away from the bravery and gumption Kushboo demonstrated in standing by her words, and she will always have my deepest respect for having done so. Good on Kushboo, and good on the Supreme Court of India.