I was first blown away by Riz Ahmed when I saw him perform on Britz. It was only afterwords that I realized that Riz wasn’t just an actor – he’s also known as Riz MC. Straight out of the U.K., his lyrics are dynamic and controversial and his sound dances on the edge of gritty hip hop and electro sci fi. Amardeep’s written about Riz MC’s controversial lyrics in the past. I had the chance to sit down virtually with the infamous Riz. Here’s what he said.

Taz: Though you’ve been MCing for a few years, MICroscope is your debut album. Why did you wait so long to release your first album?

Riz: I guess you could say it was because I was busy filming. But in reality, I also wanted to take the time to find my sound and set out a unique style of music and lyrics – dense lyrical ideas with bold simple electronic or totally acoustic sounds. This album took 18 months to make.

T: On your website you say that “the album is coupled with a groundbreaking live show and a trans-media online experience.” What exactly does that mean?

R: There’s a live show that goes with the album. It’s a gig or concert but it also has a story line in which the audience is involved in moving forward. It’s pretty unique as a concept and in the way it’s performed. There’s a short film that ties in with it too. Both the website for the album and live shows are cutting edge digital interactive. So it’s an album, show, film, and website all set at different points in the same story world. T: What inspired you to jump on the mic in the first place?

T: Was there an album or artist that really influenced you to be an MC?

T: How does your identity as a Muslim and/or South Asian of the diaspora influence your lyrics/projects?

R: Same as anything else – it’s not defining, it’s just another insight and point of view I can offer – but only when it’s relevant. I’m not about flying flags that separate us. The common theme in my lyrics is how you deal with NOT belonging to anything – any scene or a clear sense of self – how do you connect with authenticity and sincerity when we’re all social chameleons anyway.

T: I remember that you performed in the Taqwacore documentary – since then, quite a Taqwacore scene has developed in the States. You got to hang out with some of the scensters at Sundance this year – how do you feel about the scene?

R: I have known those guys for a few years now since we met in Chicago randomly and have done shows together since that. They are great people with big hearts and big ideas. I’m not taqwacore personally but I support those guys, from Mike Knight, The Kominas, Al-Thawra and all of ‘em. They are uniquely creative, are genuinely fresh and they’re cool cats.

T: It looks like your career started as an actor on stage, television and film and that you shifted into music. Do you feel like these are mutually exclusive or that you are entertainer?

R: No, that’s not the case. My first track Post 9/11 Blues was out before my first film. I have always done both. I don’t feel I am a jack of all trades entertainer doing anything it takes to entertain. I love acting, I love music and I love all the sides to both film and music. I have the opportunity to do both so I don’t limit myself. I’m picky about what work I do so that I can do both.

T: You’ve chosen some very interesting roles over the years it seems. Your participation in the role in ‘Britz’ caused some commotion on the blog, and your role as a jihadist in ‘Four Lions‘ sounds like it has the potential to be just as controversial. How do you decide which roles to choose?

R: It has to be something I would stand by in years to come, something that pushes me or the viewer in some way, and something worth leaving my music alone for over two months.

T: Four Lions was playing at Sundance this year and I hear it is getting rave reviews in the UK. How would you describe the movie and how do you feel about this new post-9/11 jihad movie genre?

R: I think that Four Lions explodes that genre. It flips it totally on its head. I feel lucky I have only done projects that subvert that bandwagon of sensationalist scaremongering. Four Lions is really the nail in the coffin for that shit. Just watch it and you will see what I mean. I mean…it’s a comedy!!! It’s jihadist comedy! Chris Morris is a genius. It subverts, surprises, humanizes, and puts it into a unique light. And it’s damn funny. 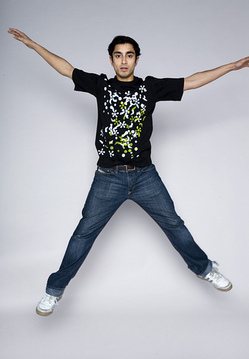 T: You seem like you are working on multiple projects at any given time. What are you working on right now? What is a day in the life of Riz?

R: Right now, I am working full time on the MICroscope live show – details are at www.rizmc.com – it’s taking over Fabric on 17th June – the world famous club where I wasted my youth – so that’s a special feeling. Then it tours Glastonbury and latitude and hopefully next year – the world!

On any given day, I am juggling all the multiple sides to creating this music concept. From the film to PR to recording to press to talking to you to going up for auditions for films in between projects. It can be tricky but I have attention span issues so it suits me.

T: Any plans to come to the US soon and take the album on tour?

T: If you could collaborate with anyone or anything, who would it be?

R: Roots Manuva and Mos Def, maybe. Actually, Bjork and Radiohead. And I’d get Gaspar Noe to direct the video!

To check out Riz MC, visit his website at www.rizmc.com or at www.myspace.com/rizmc. To hear the album, check out his website. The album is now available for download on iTunes in the UK and soon to be in the U.S. And of course, follow him on Twitter!

6 thoughts on “Pass the Mic: Interview with Riz MC”