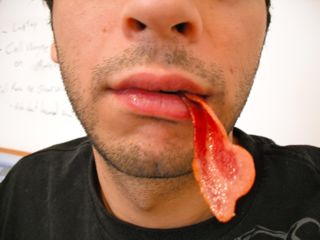 Three weeks ago, 25-year old Philadelphian and lifelong foodie Abdullah Saeed did something thousands of people around the world were doing that very minute – he wrote a blog post. The post, titled “What a strange new feeling” was the first for his blog, ‘Adventures in Pork: A Muslim eats various pork dishes for the first time in his life and divulges his thoughts.’ Over the next four weeks, Saeed, a DJ and freelance writer tried Wendy’s Baconator, Pork Vindaloo and BBQ pork ribs among other pork dishes. The reaction from the blogosphere was immediate. Phoodie, a Philadelphia food and drink blog had this to say about Adventures in Pork, “Saeed’s almost poetic prose and fresh perspective on swine merge like ribs and BBQ sauce that makes for a witty feast for the eyeballs.” Thrillist wrote, “a scrumptious blog from a guy who realized he could have his pig and eat it too.”

I first heard about Saeed a few days ago, when I asked Hassan from Sunny Ali & The Kid who ‘The Kid’ was in the band. He introduced me to Saeed’s blog and suggested I read it. I was immediately hooked. I simply had to interview my bacon-brother-from-another-mother (especially given my own current exploration of pork.) Saeed was kind enough to sit down and share his story with SM. Q: Tell me a little about your upbringing.

A: I was born in New Hampshire but my parents moved to Bangkok, Thailand when I was an infant and we lived there until I was 13. After that, we moved to Long Island and then New Jersey. We also spent some time in Boston, where I first met Shahjehan of The Kominas. I came to Philadelphia in 2002 to attend Temple University where I majored in marketing.

Q: Marketing, huh? That explains a lot. Is that what you did after you graduated in 2006?

A: I hated marketing. However, I did work for an ad agency after graduation. Then I started contributing to Foundation, a mix-tape magazine based in South Philadelphia that is now defunct. I wrote music reviews for them before I became their music editor, which I did for a year and a half.

Q: When did your interest in music begin?

A: I originally played drums in high school for an old-school style punk rock band, in the Dead-Kennedy’s style. I was listening to Brit electronica, which I got from my older brother (who I later played with during college in a band called Cold Hands Collective). As a DJ in high school, I had no one to rap over my beats. That was about the same time I came up with the name Blame the Kid. I craved having DJs and rappers around me.

My jumping-off point was writing for joshspear.com about music trends. I also wrote about music for the website One Riot. I’ve worked with a lot of websites and there are a lot of web projects I did with decent success, but nothing like the initial response to Adventures in Pork.

Q: Why do you think this particular project, Adventures in Pork, resonated with so many people?

A: Well the idea is so provocative, someone who is Muslim eats pork for the first time. My non-Muslim friends were very excited about how I was getting about this eating of pork. People kept giving me recommendations, telling me ‘You should try this pork dish or ‘You should go this place for pork.’ I saw this as a button that hasn’t been pushed yet.

Q: Your blog is centered around the idea of your Muslim heritage. Is that something you incorporate in your music?

A: In music I never utilized my heritage. I never said to myself. I’m Pakistani, I should listen to Mehdi Hassan because it has to do with my heritage. Actually one of my inspirations was Shajehan from the The Kominas who showed me the Taqwacore documentary. Being a young male musician who is also American Muslim, that documentary really inspires you, even if you’re not playing desi music or Islamic music.

Q: When did you first think about eating pork? In your blog, you write “I drink alcohol, philander with women (albeit only one. I call her ‘girlfriend’), gamble within my means, and duck every regulation that doesn’t fit with my lifestyle, yet I did not eat pork.”

I had no intention of ever eating pork, never even thought about it. One day in May, I grabbed a Vietnamese hoagie, called banh mi from a place in South Philadelphia and went to pick up my younger cousin, who’s like a brother to me. My cousin went to take a bite from the hoagie and I told him, “There’s no meat in it, it’s veg” because 10 out of the 12 hoagie options at the place had pork in them and I didn’t eat pokr. My cousin gave me an incredulous look and said, “You don’t eat pork?” I was shocked. It was like my older brother telling me that he smoked pot. I was excited by that idea.

Q: Tell me about the first time you ate pork.

I went to the Rome for the month of August and just before I left, I had a conversation with my mother, who has never eaten pork herself. My mom is very liberal, she didn’t tell me not to do it, she just said, see how you feel in the moment. I went there and my friend’s girlfriend was cooking a lot of Italian pork dishes and I was just like, ‘To hell with it.’

Q: Do you consider yourself Muslim?

A: Well, when I was younger, I was constantly questioning my faith. I don’t take Islam too seriously. For now, my only connection to Islam is cultural, I don’t practice it. But I know that when people look at my name, they are going to treat me as Muslim.

Q: You and Hassan Malik, formerly of the band POPO, recently started a group called Sunny Ali & The Kid. How did you meet Hassan?

A: I was playing with a band called The Mighty Paradox at the same show that Hassan was playing with POPO. When Hassan started his thing, he contacted me. Before this, the only desi guy I had ever played with was my older brother. 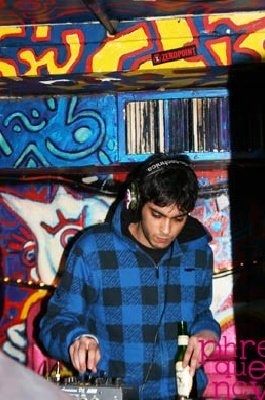 Q: In a recent blog post, you write “I still won’t cook it [pork] at home, nor will I buy it at the grocery store.” Why?

A: I don’t cook pork. I do cook a lot of Thai food at home because it is comfort food for me. Each time I eat pork, it’s an adventure to me. If I’m hungry, I’m never gonna get an Italian hoagie. Even the best pork I eat, I’m like ‘Oh god.’

Q: And if I’m not mistaken, you’re still not a bacon fan. What’s up with that, man? What is wrong with you? I mean, what’s wrong with bacon?

A: I don’t not like bacon, I just feel like it’s not the great thing ever. I’m not sure why. It’s good. I just don’t understand the hype. So far the best thing I’ve had is pork belly.

[Editor’s note: There was a pause before PG could stop weeping and regain her composure.]

A: I like the Vietnamese place at 9th and Race and also Phoa Hoa at 11th and Washington. That’s my shit. I can’t decide on a favorite place for pork. I haven’t gone to the same place twice. I’m still waiting for a place like that. If there’s a place that could turn me on to their pork regularly, well…

Q: Let’s get something clear here, you do not, as of yet, actually like the taste of pork, is that correct?

A: When I say something sounds good, when I tell my friends tell me about a new place and I tell them ‘sounds good,’ I mean, it sounds interesting. I’ll try anything. I’ve had kangaroo jerky (it tasted like chicken), brains and beef tripe. Also I’ve eaten frog in Korea.

Q: Your posts often talk about the guilt you feel as you consume pork. Why is that?

A: The guilt is a result of conditioning. The guilt has nothing to do with my beliefs. To me, the idea of eating an animal like the pig has been made real dirty. I don’t ask myself ‘why?’ when I’m eating pork. I’m not thinking about the why, I’m just experiencing it. If you think about ham, it becomes too much. When I think about the parts of a pig [shudders]…

Q: As a foodie, are there any cooking shows you watch particularly?

A: I have to watch more of this cooking stuff and less Seinfeld re-runs, but I do like Anthony Bourdain’s show No Reservations, on the Travel Channel. Eating shows are weird to me, but it’s basically what I do. It’s a strange thing.

Q: Have you ever gotten flack from pious Muslims for your pork-eating adventures?

A: It’s not my place to tell anyone what to do or how to live their life. I’m not encouraging anyone to do anything. If someone can find value in my blog, good for them. If it’s offensive, well…it’s not my responsibility to keep Muslims Muslim. If anything, I’m hoping that non-Muslims will take away more of an understanding of Muslims after reading this. I mean, what really makes you Muslim? Is it the rules? I grew up in both mainstream American and Muslim cultures, I’m trying to play off one of the most interesting dietary restriction Muslims have in a country that doesn’t have any.

24 thoughts on “Q&A with @PorkAdventurer aka Abdullah Saeed”