Bobby Jindal wants you to root for the Saints in the Super Bowl, but here’s a reason to root for the Colts: John Singh Gill, son of Ajit and Ann Gill, is a defensive lineman for the team (via Ultrabrown). He was recently elevated to 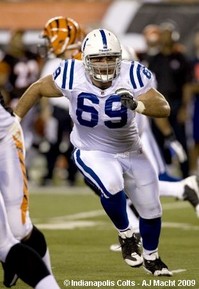 the active roster, so he may see some playing time. Now I know what my friend meant when he said, “I’m looking for 69 during the big game.”

If the Colts win, Gill won’t be the first desi player with a Super Bowl ring. That distinction belongs to Bobby Singh, who won a ring while on the Rams practice squad in ’99. The Fiji-born Singh is the only player to win a Super Bowl, XFL Championship and a Grey Cup. Other active desi football players include Obby Khan, a center for the Winnipeg Blue Bombers, and Brandon Chillar, who plays linebacker for the Packers and is perhaps the best desi football player ever (Baichung Bhutia not included).

Q:If you could dine with anyone from any period in history, who would it be?
A: Ghandi (sic)

Q: If you could have a starring role in any film already made, which movie would you pick?
A: The Godfather

Q: What is the greatest lesson in life that you have learned?
A: Always do your best in every aspect of life

Q: Something people would be surprised to know about me is…
A: I am half Indian

Q: My ultimate SportsCenter highlight would be…
A: Returning an interception 100 yards for a touchdown

Q: The person that inspires me the most is…
A: My parents

Q: My favorite food is…
A: Italian food

Q: My favorite pre-game ritual is…
A: Eating

Q: If you were to have your friends attribute one quality to you, what would it be?
A: Loyal

He wants to dine with Gandhi and he likes Italian food? Oh, I get it now: He meant Sonia Gandhi.