There were two stories relating to human cognition today that really had me thinking about the way we…think (how appropriate). The first involves the game of chess. You know, the game of kings invented so long ago in India:

Chess is commonly believed to have originated in North-West India during the Gupta empire, where its early form in the 6th century was known as caturanga (Sanskrit: four divisions [of the military] – infantry, cavalry, elephants, and chariotry, represented by the pieces that would evolve into the modern pawn, knight, bishop, and rook, respectively). The earliest evidence of Chess is found in the neighboring Sassanid Persia around 600 where the game is known under the name became chatrang. [Link] 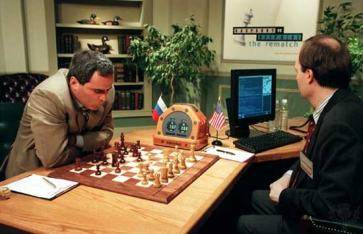 Garry Kasparov, the former world chess champion (the current is India’s Viswanathan Anand) has penned a brilliant (absolute must-read) essay/review of the new book, Chess Metaphors: Artificial Intelligence and the Human Mind. The title of his essay could have easily been, “How I Learned to Stop Battling and Love the Computer.” It chronicles his victories over the machines, followed by his losses, followed finally by a type of brutally efficient partnership. Let the human worry about strategy and the machine about tactics.

…I narrowly defeated the supercomputer Deep Blue in a match. Then, in 1997, IBM redoubled its efforts–and doubled Deep Blue’s processing power–and I lost the rematch in an event that made headlines around the world. The result was met with astonishment and grief by those who took it as a symbol of mankind’s submission before the almighty computer. (“The Brain’s Last Stand” read the Newsweek headline.) Others shrugged their shoulders, surprised that humans could still compete at all against the enormous calculating power that, by 1997, sat on just about every desk in the first world.

It was the specialists–the chess players and the programmers and the artificial intelligence enthusiasts–who had a more nuanced appreciation of the result. Grandmasters had already begun to see the implications of the existence of machines that could play–if only, at this point, in a select few types of board configurations–with godlike perfection. The computer chess people were delighted with the conquest of one of the earliest and holiest grails of computer science, in many cases matching the mainstream media’s hyperbole. The 2003 book Deep Blue by Monty Newborn was blurbed as follows: “a rare, pivotal watershed beyond all other triumphs: Orville Wright’s first flight, NASA’s landing on the moon….” [Link]

p>Some people actually belive that you can literally “solve” chess, the way someone actually “solved” checkers. Fear not, it is unlikely there is a chess solution:

The number of legal chess positions is 1040, the number of different possible games, 10120. Authors have attempted various ways to convey this immensity, usually based on one of the few fields to regularly employ such exponents, astronomy. In his book Chess Metaphors, Diego Rasskin-Gutman points out that a player looking eight moves ahead is already presented with as many possible games as there are stars in the galaxy. Another staple, a variation of which is also used by Rasskin-Gutman, is to say there are more possible chess games than the number of atoms in the universe. All of these comparisons impress upon the casual observer why brute-force computer calculation can’t solve this ancient board game. They are also handy, and I am not above doing this myself, for impressing people with how complicated chess is, if only in a largely irrelevant mathematical way. [Link]

p>I absolutely love the highlighted sentence above because it so appropriately conveys something so important about life. People who typically succeed or “go the farthest” in life are the ones whose cognition has matured enough that they can think, envision, dream several moves ahead. They can see as many possibilities as stars in the galaxy. And I don’t mean plan ahead, I mean visualize outcomes and the paths there. No wonder so many desi parents start their kids on chess early. The fact that they get to tell the young kid, “did you know Indians invented chess?” is just an added bonus.

p>Eventually Kasparov starts to partner with the computer and learns something else about this partnership:

The surprise came at the conclusion of the event. The winner was revealed to be not a grandmaster with a state-of-the-art PC but a pair of amateur American chess players using three computers at the same time. Their skill at manipulating and “coaching” their computers to look very deeply into positions effectively counteracted the superior chess understanding of their grandmaster opponents and the greater computational power of other participants. Weak human + machine + better process was superior to a strong computer alone and, more remarkably, superior to a strong human + machine + inferior process. [Link]

The second story about human cognition centered around Stanford Professor Baba Shiv’s work and was featured on NPR this morning (I am sure many of you heard it) and the WSJ last month:

Willpower, like a bicep, can only exert itself so long before it gives out; it’s an extremely limited mental resource.

Given its limitations, New Year’s resolutions are exactly the wrong way to change our behavior. It makes no sense to try to quit smoking and lose weight at the same time, or to clean the apartment and give up wine in the same month. Instead, we should respect the feebleness of self-control, and spread our resolutions out over the entire year. Human routines are stubborn things, which helps explain why 88% of all resolutions end in failure, according to a 2007 survey of over 3,000 people conducted by the British psychologist Richard Wiseman. Bad habits are hard to break–and they’re impossible to break if we try to break them all at once…

p>The brain area largely responsible for willpower, the prefrontal cortex, is located just behind the forehead. While this bit of tissue has greatly expanded during human evolution, it probably hasn’t expanded enough. That’s because the prefrontal cortex has many other things to worry about besides New Year’s resolutions. For instance, scientists have discovered that this chunk of cortex is also in charge of keeping us focused, handling short-term memory and solving abstract problems. Asking it to lose weight is often asking it to do one thing too many.

In one experiment, led by Baba Shiv at Stanford University, several dozen undergraduates were divided into two groups. One group was given a two-digit number to remember, while the second group was given a seven-digit number. Then they were told to walk down the hall, where they were presented with two different snack options: a slice of chocolate cake or a bowl of fruit salad.

Here’s where the results get weird. The students with seven digits to remember were nearly twice as likely to choose the cake as students given two digits. The reason, according to Prof. Shiv, is that those extra numbers took up valuable space in the brain–they were a “cognitive load”–making it that much harder to resist a decadent dessert. In other words, willpower is so weak, and the prefrontal cortex is so overtaxed, that all it takes is five extra bits of information before the brain starts to give in to temptation. [Link]

p>Fascinating no? It also explains why politicians dumb down their messages so much. Nuance = too much information to remember = voter cognitive overload. And how does this relate to the first article I summarized above? How does it relate to chess? Simple. Chess teaches your brain how to make rational, calculated decisions even when your prefrontal cortex is overloaded with all the possible moves ahead. If you give in to temptation and take your opponent’s vulnerable pawn while his queen can be dispatched with three alternate moves, you may very well lose. To win you must resist temptation while storing lots of information in your short term memory:

Adriaan de Groot, in his doctoral thesis, showed that chess masters can rapidly perceive the key features of a position. According to de Groot, this perception, made possible by years of practice and study, is more important than the sheer ability to anticipate moves. De Groot also showed that chess masters can memorize positions shown for a few seconds almost perfectly. The ability to memorize does not, alone, account for this skill, since masters and novices, when faced with random arrangements of chess pieces, had equivalent recall (about half a dozen positions in each case). Rather, it is the ability to recognize patterns, which are then memorized, which distinguished the skilled players from the novices. When the positions of the pieces were taken from an actual game, the masters had almost total positional recall. [Link]

My father must have already figured out everything I’ve written here. When I used to come home from college, and even now when I come home, he challenges me to a game of chess. First however, he insists that I have some Vodka (or maybe a screwdriver). He basically tries to Tonya Harding my prefrontal cortex before we begin. Now that is thinking ahead.

19 thoughts on “Working the prefrontal cortex since the Gupta Empire”