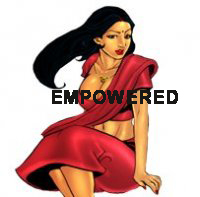 Freedom of speech. It’s not something I take for granted. I grew up in Zambia during an era when you could say anything you wanted about the country’s president, as long as you had already started the engine of your getaway plane. That’s what I love about countries like America and Canada — freedom of speech has no bounds, as long as you don’t scream “Fire!” in a crowded theater, threaten the president or profess your undying love for Osama bin Laden. Okay, so it does have bounds, but you get the point. I don’t remember the last time a journalist or author had to run away from an angry mob. It’s just not the way things are done, as I learned several years ago when I tried to assemble a mob to chase Ann Coulter.

India allows a great amount of free speech, compared to many other countries. But just ask fans of Savita Bhabhi how free they are to enjoy her sexcapades. The cartoon seductress has been banned in India, perhaps to the delight of many a wife, who remembers the good old days when her husband got his thrills out of Asterix. As S. Mitra Kalita writes in the WSJ, Savita joins The Da Vinci Code, The Polyester Prince, and Royal Magazine as “examples of India’s hindrance of free speech.”

You might never have heard of Royal Magazine, but it’s an example of the squelching of free speech in India that seems more common–preemptive and driven by fear. Editor in chief Ronak Vyas wrote to me and said, “I have been publishing an online magazine that features nudity and had my share of problems in India. To be honest I feel like you can get away with anything as long as you don’t offend a particular person or group on a personal level.”

This being India, offending someone is a given. This being India, also the world’s largest democracy, the government needs to weigh what’s more important and whether it draws the line too soon, too early.

Consider this comment from Gaurav Jain: It’s “not about the internet or Savita alone, its (sic) a general lack of freedom in being able to criticise or comment on our holy cows (leaders, gods, other religious figures) … some mob somewhere will have a reason to protest most likely in a violent manner.”

Like me, he wonders whether the controversy stems from Savita being an “empowered woman making her own choices, perhaps this is a threat to certain sections of society that prefer to see their wives as creatures who should stay indoors and rear the kids (which is ACTUAL subjugation).” [Wall Street Journal]

Savita was banned because she’s an “empowered woman”??? Watch out Indra Nooyi, you could be next.

Fortunately, I’ve already downloaded hundreds of Indra’s pics to my hard drive. Let me know if you want any. And please indicate your preference: business suit or sari.