Hey, remember when Google’s motto used to be “don’t be evil?” Vaht, you thought they still had it? I did too, but this…might not be evil, but it certainly seems a little unfair: 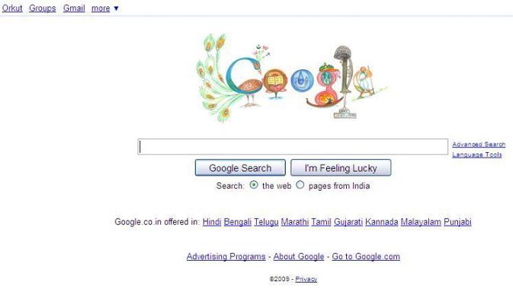 Google India had launched a ‘Doodle 4 Google – My India’ contest in August. The Doodle is the logo design you see on the Google homepage. The theme of this competition was ‘My India’. On November 12, Google India announced at Taj Ambassador Hotel that tech hub Gurgaon based 4th standard school kid Puru Pratap has won the competition…a laptop computer for himself, a t-shirt with his doodle and Rs. 1 lakh (approx 2100 US dollars) for his school.

But his counterparts in USA and UK won substantially more. According to Google their US winner “will win a $15,000 college scholarship to be used at the school of their choice, a trip to the Google New York Office, a laptop computer, and a t-shirt printed with their doodle. We’ll also award the winner’s school a $25,000 technology grant towards the establishment/improvement of a computer lab.”

The writer of the quoted piece goes on to point of various other prizes that are awarded equally to winners from all countries. She concludes:

Are we children of a lesser Google? Or is the Indian market less important? Perhaps Bing has the answer.

42 thoughts on ““Children of a Lesser Google””