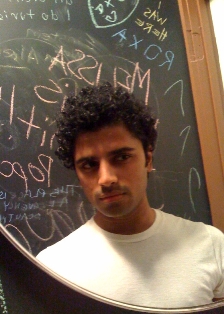 A little over a year ago, my social networking life was all but nonexistent. Like everyone else my age, I had a Facebook page left over from college. Other than the occasional stalk-in, er login, however, I rarely used my account. But overnight (it seems) everyone and their aunty joined Facebook. Before I knew it, I had second cousins from Pakistan who I’d never met trying to friend me and my mother calling me every morning to discuss my status. (“You were sick and you didn’t call me?”) Now Facebook is the first site I visit each morning. And after Facebook comes Twitter. (My name is ____________ and yes I do have an Interwebz addiction.) And now, I’m afraid I may just join Foursquare, a new social media site which has my friends abuzz. What is Foursquare you ask? Ever sat by yourself in a coffee shop? Wished a friend was close by and wanted to hang out? Didn’t feel like texting everyone in your phonebook? If you’d logged in to Foursquare, which was co-founded by Dennis Crowley and Naveen Selvadurai this past March, you would’ve known immediately who was around.

Before you start crying “stalker,” read this article from the New York Times.

…for many urbanites in their 20s and 30s, two other questions are just as important: Where are you, and can I come join you? For them, a fast-growing social networking service called Foursquare is becoming the tool of choice. A combination of friend-finder, city guide and competitive bar game, Foursquare lets users “check in” with a cellphone at a bar, restaurant or art gallery. That alerts their friends to their current location so they can drop by and say hello.

Other companies… are also offering services aimed at helping friends find each other on the go. But Foursquare has attracted more attention than the others, in part because it incorporates elements of gaming and social competition.

The system awards points and virtual badges to players depending on how often they go out and which places they visit. Users who frequent a particular place enough times are crowned “mayor” of that particular location.

Whaddya guys think? Next Facebook? Or is just another fad? Are you a Foursquare user? Should I add yet another task to my list of web addictions?

Alrighty, full disclosure, my interest in Foursquare was piqued after a friend Tweeted this picture. 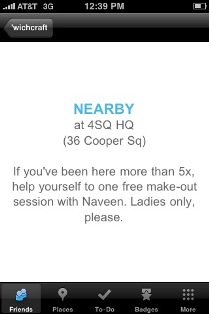 Hmmmm. Methinks it’s time to get that “I heart geeks” T-shirt back from the dry cleaners and get some badges.