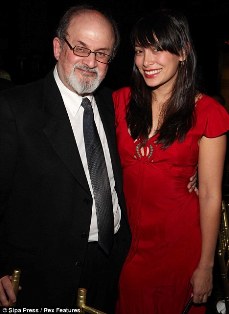 Who needs to read a good novel when you can scrutinize the life of a fun-loving author? That’s right, you guessed it. Salman Rushdie is at his hijinks again. I was half-tempted to write a long, philosophical (totally hypocritical) post titled “An Open Letter to Sir Salman” that would poke snarky fun at this lothario, but I didn’t have the heart. After all, who are we to mock another’s romantic foibles? Well, that and the other part of me wanted to write a totally different post called “Choose me, Salman,” which touted my virtues over those of his former lady-loves. (Foremostly, I would never choose cooking over a wordsmith like Salman, mostly because I can’t cook.) Finally, I came upon the perfect way to update SM readers on Salman’s latest exploits. A timeline. Okay kids, now pretend you’re back in fifth-grade history class and let Teach lay it out for ya. After all, it’s Friday. You need your celebrity fix. Here’s how it goes down.

– Tuesday, October 20. Actress and most-recent girlfriend of Rushdie’s, Pia Glenn, tells the New York Post about her relationship with the man of letters. According to her, things ended less than amicably.

Statuesque actress Pia Glenn said she fell in love with the 62-year-old novelist, who “said he loved me.” She moved into his New York home in January. But she says she became frustrated with his obsession with Lakshmi, and she was heartbroken when he abruptly dumped her by e-mail in June. “He stole more than a year of my life, but I held out hope we could be friends. But whenever we tried to speak on the phone it became ugly — yelling and shouting.”

And that sums it up for this week in Salman. On a totally unrelated note, Mr. Rushdie, if you happen to remember that girl in the pink dress who totally fainted when you came to the book-signing of “The Enchantress in Florence” at the Free Library of Philadelphia last June that was me and I still looooooove you.

47 thoughts on “One Week in the Life of Salman Rushdie”