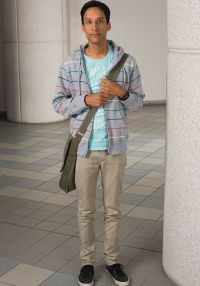 “Most of the roles you get are not Polish…You don’t seem like a typical Pole,” Jimmy Kimmel joked while interviewing comic actor Danny Pudi on his late night show. The lanky Chicagoan and Polish-Indian American Pudi was sitting in a chair autographed by Rod Blagojevich.

And indeed, his role on the new TV series “Community,” is not Polish either. He plays Abed, a half-Palestinian character.

Pudi, whose mother immigrated from Poland and his father from India, acknowledged that portraying Polish characters was not his “wheelhouse.” Playing South Asian characters is.

“I played three Sanjays…Haven’t played any Polish characters yet.”

You can watch his Kimmel interview after the jump.

“Community” is about a motley group of students taking Spanish at a community college. They are played by an ensemble cast that includes comedy legend Chevy Chase as Pierce, an elderly, wealthy and dilletante classmate of Pudi’s character Abed. Abed is usually quirkily and rapidly reciting various facts including quotes from 80s movies. This leads one of his classmates, a lawyer whose degree has been revoked played by Joel McHale, to unofficially diagnose him with Asperger’s. 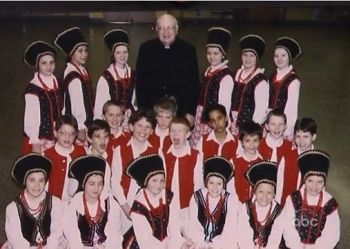 Before peppering his remarks on Kimmel with Polish words Pudi talked about his childhood. It included ethnic dancing classes (group photo at right, I was surprised that Kimmel didn’t have him demo a move or two) and being raised by his Polish grandparents.

He also name-checked Kal Penn (“best actor of all time”) in his opening Kanye joke.

Asperger’s or not, I thought Abed’s socially awkward but funny portrayal was one of the highlights of “Community’s” pilot episode. I would tune in again to see more of Pudi on TV if this new series makes it past the fall TV premieres season.

The Washington Post seems to agree. It called Pudi the lone “standout” of the ragtag Spanish study group that makes up the cast of characters on “Community.” And it also reminds me of where I’ve seen Pudi before.

He’s the butt-dialer called out by his girlfriend in those cell phone ads:

The “Community” pilot episode is on Hulu:

Related: Along with stand-ups Rasika Mathur and Ranjit Souri, Pudi was part of the comedic group Siblings of Doctors.

Pudi at Ultrabrown and visiting the TV Guide offices.

He was also in a McDonalds TV ad. (Thanks, Himanshu.)

16 thoughts on “He’s Your Polish Dancer, Your Brown Actor for Hire”