Do you watch “Chuck”? That TV show about the secret, CIA-protected life of a tech dork who works the Nerd Herd desk at a Best Buy like electronics store? The first season was cute, the second sort of lost me, then they got Scott Bakula to play his dad and I’m hooked again. (Quantum Leap forever!)

One of the more amusing aspects of the show is that Chuck’s real world life at the Nerd Herd desk is as drama-filled as his intelligence/espionage secret life — courtesy of a scheming nemesis, Lester, played by desi actor Vik Sahay. 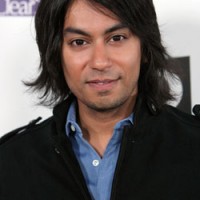 It’s a small role, but Sahay really owns it, milking every line for humor and dimensionality. So when MTV Iggy interviewed him, we vaguely thought he would be this, like, funny cocky guy and we’d edit it down to the best 2-3 bits. We certainly had no idea it would turn out to be one of the most searching, intelligent, thought-provoking interviews I’ve seen in years.

We ended up cutting something like 14 segments because all of it was interesting. That’s a ridiculous number, by the way. No one’s ever gotten that much play. Six clips were aired while we try to figure out what to do with the rest.

Anyway, you should just watch to see what I’m talking about. And if you only watch just one, it should be this segment about his first trip to India, to film the movie Amal:

A Stranger in the Motherland: "This Is a Major Part of What Courses Through My Veins"
Vik Sahay

It’s so not your typical actor BS, it’s almost shocking. He dives into what it’s like to be born in the west and then return to the country of your parents in a way that’s so eloquent, so hits-the-nail-on-the-head, so…anyway, see for yourself.

If you want to watch more –

Stuff about the show:

Being an “ethnic” actor in hollywood:

Why do ethnic groups band together? “Misery loves company”:

"Bring Your Soul To It"
Vik Sahay

Beyond Gurus and Doctors: "This Is the Way We're Coming In"
Vik Sahay

In case you’re wondering, the interviewer is our Exec. Producer. The scheduled interviewer flaked on us big time, so he had to step in. This was also in LA, so after a long winter in NY, Lem tanned like crazy…just wanted to explain the red-and-yellow coloring. Lindsey Lohan didn’t attack him with her bronzer. Actually, that only explains the tanning. I have no excuse for the hair.

14 thoughts on “Interview with Vik Sahay”