In July thanks to a tip from mutineer Eurasian Sensation, I learned that Philly had its own resident desi hip-hop artist, 28-year old Raj Haldar aka Lushlife whose second album, Cassette City, came out in June from Rapsterrecords. As your East Coast correspondent, I did a little investigative journalism (okay, I emailed him) and got the chance to ask Lushlife a few questions one-on-one.

Q: So Raj, when did you get into music?

A: I was always really connected to music, even at a young age. When I was in second grade, my grandmother came to visit from India and we would watch MTV eight hours a day. Around 5th grade, I began listening to artists like Nas and The Roots, mostly through the influence of my older brother. When I was 11, my parents bought me a turntable for my birthday and I set up DJ equipment in my parents’ basement. I would save my lunch money, literally starve myself for weeks so I could buy records to play on the turntable.

Q: How did your parents contribute to your music?

A: They started me off with piano lessons from the age of five to 18. All the Indian kids took piano lessons. I didn’t appreciate it at the time, it had a stultifying effect, but in retrospect, it informed my music. I also play jazz drums and the guitar. Oh yeah, and when we visited India, I brought back a mandolin, so that was cool.

Q: When exactly did you start rapping?

A: For most of my high school years, I was mostly producing rap instrumentals. It was only through force of circumstance that I started rapping. I didn’t even know I could rap. But in the past five or six years, I’ve learned to hone that skill.

Q: Where did you grow up? And how did you get to Philly?

A: I grew up in North Jersey, close to NYC, but I’ve lived in NYC, as well as toured Europe and Japan during the release of the first album I produced that featured my rapping, Order of Operations. I’ve realized that my wanderlust gives me an energy that has a fresh and positive impact on my music. At the end of 2006, I moved to Philadelphia on a whim and this is where my entire album, Cassette City, was gestated. I live in South Philadelphia and I have to say there are some awesome cultural aspects to being in a big city like Philadelphia.

Q:Okay, so you were born here in America. Which part of India are your parents from?

A: They’re Bengalis from Calcutta.

Q: What do they think about your music? Do they love it? Hate it? Disown you?

A: [Laughs.] Well, they’ve certainly spent a good fifteen years or more listening to my rap music and they certainly support me. Although when Cassette City was released, my parents were in Vegas and they had to call me to find out what the name of the album was that I had been working on for two years. 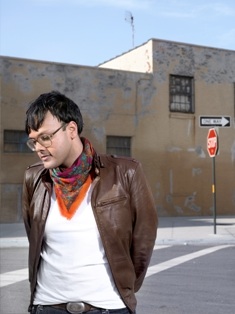 Q: Did their musical tastes influence you?

A: I certainly spent a lot of time listening to their music, that 50′s and 60′s Bollywood stuff. I even made a mixtape called The Evergreen Sessions, as part of my musical experiments.

A: No, unlike some South Asian rappers, I try to completely separate my artistic output from my culture.

Q: Okay, so a lot of your critics says you’re more of a producer than a rapper. Your response to that?

A: [Laughs.] It’s a fair accusation. I don’t consider myself a rapper/producer, I just make songs and I spend a hell of a lot of time making music that speaks for itself.

Q: What’s your opinion on desi artists, say for instance Jay Sean, who is doing quite well on the American pop culture scene nowadays?**

A: I have a great appreciation for artists like Jay Sean. At the same time, I tend to think their songs are the typical saccharine boy-band sound with a R&B veneer. I’m a little more of a hip-hop classist.

Q: Do you listen to any desi hip hop artists? Any you like in particular?

A: I’ve been listening to a lot of Das Racist as of late. Even though their lyrics are jokey, I tend to think they have a deeper meaning.

Q: What’s a day in the life of Lushlife?

A: Well, I go to work and after that, there’s about four to five hours of rehearsal for my upcoming tour.

Q: You first became known for your album *West Sounds, tell me a little about that*

A: Sure, West Sounds *[which is available for limited download] was a mashup of Kanye West’s album *The College Dropout and The Beach Boys’ album, Pet Sounds.

Q: What’s next for Lushlife?

A: It’s time for a full U.S. tour, dates to be announced.

Q: But you’ll definitely be doing a show in Philly, right?

10 thoughts on “Q&A with Lushlife aka Rajesh Haldar”