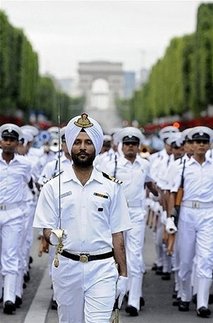 The Indian presence at yesterday’s Bastille Day events in Paris commemorated the sacrifices of Indian soldiers who fought and died in World War I and symbolized the current economic, military and political ties between the two nations. But the images of Prime Minister Manmohan Singh as chief guest and the Indian troops who marched in the annual military parade, including a group pictured to the right led by a Sikh officer, also brought to mind the French law that continues to keep Sikhs out of public schools and prevents them from getting drivers licenses or serving in the military or public office.

Overlooked back in 2004 when France enacted the so-called French headscarf ban forbidding any conspicuous religious symbols in state schools or government offices, the tiny Sikh community of France has been fighting the law in and out of the courts since then (previous SM coverage). The French President encapsulated his government’s official and unnuanced position on Sikhs in France following last fall’s European Union/India Summit in Marseille. An annoyed Sarkozy, standing next to Prime Minister Singh at the time, took a reporter’s question about Sikhs wearing turbans in France.

Sarkozy, replied curtly, “Sir, we respect Sikhs. We respect their customs, their traditions. They are most welcome to France.” Visibly irritated, Sarkozy continued, “But sir, we have rules, rules concerning the neutrality of civil servants, rules concerning secularism, and these rules don’t apply only to Sikhs…

It seems unlikely that Sikhs in France will have much luck in their efforts given more recent developments that could broaden the reach of the 2004 ban. Last month Sarkozy spoke out to support a ban of the burqa, the full-body garment worn by an estimated 100,000 Muslim women born in France (Telegraph). In public comments he said “it is a question of freedom and of women’s dignity,” and that the burqa “is a sign of the subjugation, of the submission of women. I want to say solemnly that it will not be welcome on our territory.” (Reuters)

Kamran Pasha, a screenwriter and novelist who writes about Islam recently returned from a week in France and he offers another perspective on the proposed ban.

my own experience in that beautiful country (I lived in Paris for several months in 2007) leads me to believe that the controversy over the burqa is not really about womenâ€™s rights. It is about preserving a certain cultural heritage from the onslaught of foreign values and perspectives. The burqa controversy is really about attempting to save a beleaguered French identity from being replaced by a new and alien social tradition that is spreading through the power of demographics. But social engineering is a poor tool to curtail the realities of reproduction. At current birth rates, Muslims will become a numerically influential community inside France within this century. The same is true for many other nations in Europe. Efforts to stem the power of Muslim culture from reshaping European identity are as pointless as trying to hold back a river with oneâ€™s hands. (Lifting the Veil)

Given what seems to be another sort of Bastille Day tradition in recent years â€” riots and destruction in the nation’s suburban estates like those spurred this year by the death of a young Algerian man in police custody, and evidence of employment discrimination against ethnic minorities in France, I agree with Pasha that there is more at play than the stated and maybe more publicly palatable concerns for women’s rights. The desire to prevent changes to French identity and demographics seem the more likely motivations for the 2004 law and the proposed burqa ban.

But fixating on conspicuous religious symbols like the turban or burqa does not feel like an effective way to preserve French traditions and identity, especially when it keeps people out of state schools or other public institutions â€” just the kind of places where I imagine they have opportunities to study and participate in the culture and traditions that are part of a nation’s heritage.

205 thoughts on “The Arc of Religious Freedom in France”