As someone whose own family is dispersed over several continents (my husband often jokes that we can’t visit any new country without discovering that some distant relative lives there), I’ve often asked myself many of the questions that Minal Hajratwala did: How were choices made? What were the journeys like? How do they reflect the diasporic experience? That’s what I loved about “Leaving India” (soon to be reviewed here at SM by our very own Cicatrix). I thought it would be interesting to speak with the author about how she tackled the mammoth task of “deftly exploring … the unprecedented late 20th-century dispersal of Indians to every corner of the globe and their rapid rise in the places they landed” (see Washington Post review). 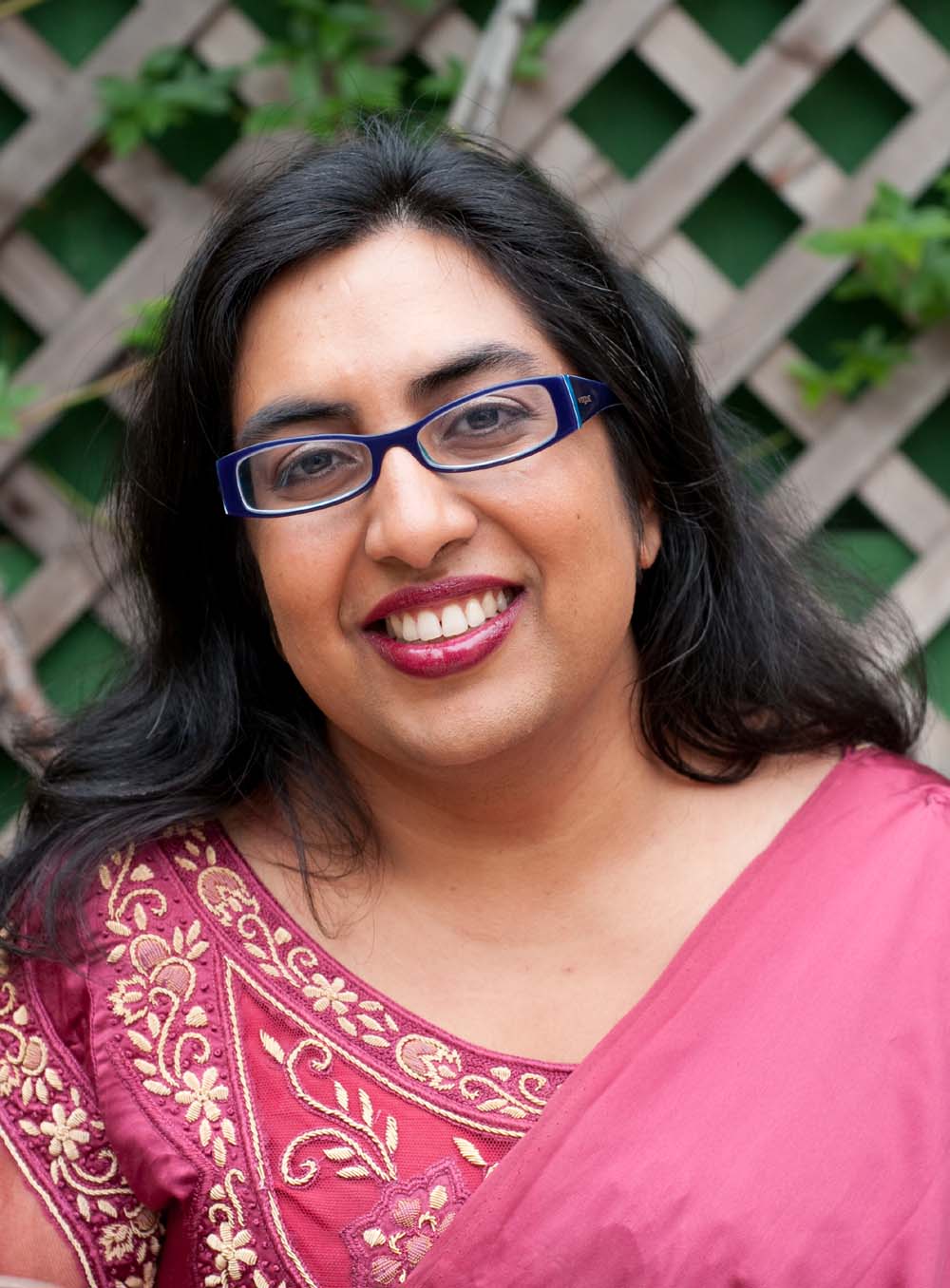 Q. You write in your introduction that you wrote this book to “find whatever fragments remain here, to trace the shape of our past and learn how it shadows or illuminates our present.” Was there an experience, an event, or some defining moment when you knew that an interest of yours had to become 7 years of your working life?

A. Not at all, it was a slowly growing awareness that somewhere in the midst of my dozens of cousins spread over nine countries was an untold story. The vague ideas swirling in my brain about migration, family, and the new visibility of Indianness in popular culture crystallized when I took a book proposal class with Sam Freedman at Columbia University, who gave me amazing guidance and editing, and asked a lot of smart questions. As I shaped it into a narrative spanning a hundred years, I became more and more curious about how all this happened, and then the questions themselves shaped my journey.

I was also naive; I thought I could research the book in a year and write it in another year. If I had thought it would be a seven-year process, I might have gotten cold feet at the beginning.

The rest of the Q&A follows below the fold. You interviewed dozens of relatives in 5 continents, and narrowed down the story you would tell to eight. Were your choices shaped by the type of historical narrative you wanted to create?

A.The narrative was shaped by the compelling personal stories I heard as I interviewed more than 75 members of my extended, and also by my growing understanding of the arcs of history that shaped the diaspora. The book is roughly chronological, so I knew it would start in the past and come up to the present. After interviewing everybody, I made a kind of grid with the decades across the top, all the way from 1900 to 2000, and a list of countries down the lefthand side. Then I listed each person in his or her appropriate time/space box — very mathematical! And then I chose representative people, so that I could cover the temporal and geographic breadth that I needed in order to convey the epic scope of the narrative. I also wanted to have a range of male and female, different socioeconomic classes, etc., within my family, so that all got factored into the equation.

And most of all I chose people who were willing to be very open with me, who were able to share all or most of their own story, no holds barred, and who had a kind of emotional transparency that made it possible to convey them as meaningful “characters” on the page.

Q. Who is the reader you imagined while working on this project, which is obviously a labor of love?

A.I didn’t have a single imagined reader, but there was a lot of love. I thought often of myself as a young girl growing up in suburban Michigan, without any access to or understanding of the historical forces that had brought me there, and in a way I suppose I wrote the book for her as much as for anyone else. I also hoped the book would resonate with readers from many backgrounds, and I’m glad that it has been. People have told me that different parts of the book are “just like my family” even if their relatives came from Jamaica or Poland rather than India. Although I don’t believe there is a “universal” narrative, I know that stories of exile, displacement, migration, opportunity, hope, fear, starting over are common for all of us in this globalized world, so in that sense I was always imagining it as part of the stream of stories written and told by women of color.

Q. What were the challenges of collecting quantitative information about the Indian diaspora? (You had discussed your process at the Columbia reading and I think readers of this interview would find that fascinating, including the “diaspora” section on your website.)

A.I kept hoping to come across comprehensive data on the diaspora, and alas, there was none, so I had to create it. I became very fluent in using spreadsheets! Basically, anytime I found a list of numbers of Indians living overseas, I plugged it into a spreadsheet. The British kept pretty decent records, and there were a couple of independent reports, and then in 2001, as part of an attempt to attract Non-Resident Indian investment, the Indian government compiled a census. So after a while I had a series of columns that gave a numerical picture of the impressive growth of the diaspora over time. Often the names and borders of countries changed and so on, so it was quite a puzzle to compile, but also very satisfying to the left-brain part of me. And it really showed me the importance of our stories: In 1900, fewer than 400,000 people of Indian ancestry lived outside India, and today that figure is estimated at 19 million to 30 million. How did that happen? It’s an amazing tale.

I’ve also made the data available here on my website for other researchers, so that others don’t have to reinvent the wheel; I’m interested to see what applications and uses it might have.

You put yourself into this narrative toward the end. Was that a difficult choice to make or was it clear to you that this was a direction that was necessary to the book?

A.At first I resisted doing so. I didn’t want to make the book all about me; I wanted to respect the other stories and let them breathe on their own, without all having to be entirely filtered through or overshadowed by my own experience.

But everyone who read the book proposal was very clear that the story needed me in it, and that to leave myself out would be to create a gaping hole in the book. So once I reconciled myself to that need, I resolved to be as honest and clear as possible. My chapter, though it ended up being Chapter 8 in the book, was one of the first chapters I wrote, because I wanted to be sure I was approaching the other stories with integrity. I wanted to make myself be as naked as I was asking my family members to be.

What were your literary inspirations that influenced and shaped “Leaving India”?

A.I’ve always loved books and I’ve been reading for more than 30 years, so it’s very hard to say. But here are some of the specific books I looked at again and again while I was writing Leaving India, to see how the authors handled matters of craft with grace, clarity, and poignance:

Susan Griffin’s A Chorus of Stones

Michael Ondaatje’s Running in the Family

Anne Fadiman’s The Spirit Catches You and You Fall Down

I think of all of these writers as masters of the art of narrative nonfiction or semi-fiction, so they were helpful with this project, though of course there are many books in other genres that I love.

As a former newspaper reporter, how did your training as a journalist shape your writing process?

A.Daily journalism trains you to work fast, think fast, and move words around fast, without being too precious about your prose. In my newspaper career I was mostly an editor, which means that my job was almost entirely revision: fixing articles and sentences to make them clearer, tighter, and usually shorter. And I wrote a lot of transitions: A newspaper article is mostly transition sentences, with quotes and facts slipped in between. In writing the book, that meant that I worked through draft after draft after draft. I was never precious about my first drafts, I was always willing to revise, which I think served me well. People have said they are enjoying the layered quality of the narrative, and I think that’s due to two things: First, the fact that I wrote multiple drafts which allowed me to layer ideas and stories on top of one another, and second, the transition sentences that enable the narrative to leap from one idea or place or scene to the next.

Your book is divided into three sections: coolies, subjects, and citizens. Do you see this as the evolution of diaspora, and if so, what do you imagine the next stage might be?

A.It’s a very rough sketch, yes, of the evolution of diaspora, though it’s important to note that there are exceptions: Even today, for example, Indian laborers are treated much like the “coolies” of old in places like Kuwait. I think the next stage depends on us. Indians in diaspora always stand at a kind of crossroads and there are multiple possible directions: assimilate into white society (Bobby Jindal), lead progressive panracial causes (Vanita Gupta), return to India to have an impact there (Shashi Tharoor) … and those are just examples from the political sphere, not even looking at cultural production and the business world and other spheres of activity. So maybe it will be all of these, and things we haven’t imagined yet. I don’t think there is one word for what we are becoming.

What were some of the key discoveries you made during the writing of this book? Things that surprised you? Things that challenged how you used to think?

A.The #1 thing I gained was a deep understanding of how amazing and difficult it is to be a migrant — even when it’s by choice and when it’s accompanied by some class or educational privilege. I really gained a new respect for what my parents and other members of my family, and even myself as a small child, went through in remaking our lives again and again in new places. Opportunity, trauma, excitement, dread — it’s such a rollercoaster of emotions and situations we’ve all navigated. Placing myself, as a writer, in the traveling shoes of my kinsmen and kinswomen over and over for seven years gave me a sense of reliving those experiences in a way that I never would have entered as deeply otherwise.

9 thoughts on “Q&A with Minal Hajratwala, author of “Leaving India””