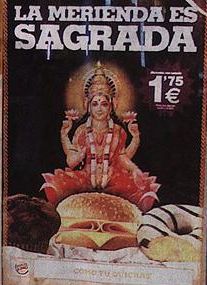 I don’t know about you, but even as a non-Hindu I found this pretty offensive. Lakshmi is the Goddess of wealth and learning, and they’re using her image in an ignorant way to promote a pretty cheap foodstuff. I mean, if you’re going to be offensive and use a Hindu Goddess to sell a meat product, why not go all the way and get your forbidden foodstuffs right? Hindus are most offended by beef and Muslims are most offended by pork. It’s like they couldn’t even be bothered to tell their non-Christian religions apart, even though Spain was ruled by Muslims for hundreds of years.

Of course, when news got out, a holy ruckus was raised, and BK issued a rare apology:

“We are apologising because it wasn’t our intent to offend anyone,” said spokeswoman Denise T Wilson. “Burger King Corporation values and respects all of its guests as well as the communities we serve. This in-store advertisement was running to support only local promotion for three restaurants in Spain and was not intended to offend anyone. “Out of respect for the Hindu community, the limited-time advertisement has been removed from the restaurants,” she added. [link]

At BK, we offend you our way.

165 thoughts on “The snack is sacred but the idiocy divine”