Australia is a country with strong cultural pressures to conform; Aussies are rewarded for fitting in rather than standing out in all areas except for athletics. It’s known as the tall poppy syndrome, as in the tall poppy gets mowed down. In the USA, there’s a different saying, one about squeaky wheels, and I’m glad to say that desis in Australia seem to be following the American model. 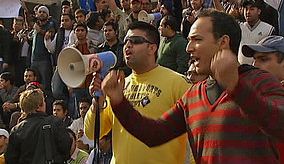 This weekend, at least 2,000 Indians protested in Melbourne, blocking traffic on a busy street for almost 20 hours to protest the large number of crimes and assaults against Indians in the last year and the lack of police interest or response. The demonstrations started at Royal Melbourne Hospital where Sravan Kumar Theerthala was lying comotose after having been stabbed with a screwdriver at a party.

Latest available police figures say 1,447 people of Indian origin were robbed or assaulted in Victoria state in 2007-2008, although students from the country say they have risen since then. Many of the most serious cases occurred in the western suburbs of the state capital Melbourne, where police estimate Indians account for about 30 percent of all robbery and assault victims. [link]

Police have denied any racial motivation, saying the students were in the wrong place at the wrong time. They have said the crimes were “opportunistic”, with Indian students seen as “soft targets”. [link]

p>In addition to the protests in Melbourne, there was a strong diplomatic response. Manmohan Singh has called the Australian PM, and the Indian and Australian Foreign Ministers are holding talks on the matter. The diplomatic engagement was accompanied by a vigorous thapad by BigB who turned down a honorary doctorate offered by the Queensland University of Technology, saying “Under the prevailing circumstances I find it inappropriate at this juncture, to accept this decoration.” 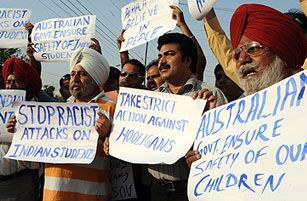 This is a serious issue for Australia because it makes $15 billion (AU) from foreign students, 40% of whom come from India and China (90,000 Indian students and 130,000 Chinese students). Foreign students are the third largest export earner behind coal and iron ore.

Right now, news of these attacks has widespread coverage in India and both governments are threatening to discourage future students from coming to Australia. This is a credible threat, a few years ago the New Zealand government failed to take racist violence against Chinese students seriously and they lost all their Chinese students as a consequence.

p>As a result of this escalation the Australian authorities have changed their tune considerably, and they are now bringing in the PM’s national security advisor to formulate policy:

p>The government is also considering enacting hate crime legislation that would consider prejudicial motivation as a factor in sentencing.

I think it’s pretty sad that it took this much diplomatic pressure, and some outright hysteria by the Indian media, before the Australian authorities would take the issue seriously. That said, based on my experience with hate crimes in the USA, the copycat attacks (including vandalism of a Gurdwara on Monday and a slashing yesterday) should die down as soon as perpetrators realize that the government will be enforcing the law vigorously. I’ve got family in Australia, I’d like to feel that they’re safe.