While the spotlight shines on Barack Obama’s long-awaited speech to the Muslim World, closer to home, I’ve been seeing lots of posters and advertising for the upcoming Muslim Voices Festival in New York City which begins this Friday, June 5 and runs through the 14th of this month. Featuring concerts, lectures, film screenings on PBS, and even, a souk, the ten-day festival is designed to celebrate the arts and culture of Muslim societies. It is the culmination of three years of organizing by the Asia Society, Brooklyn Academy of Music, and NYU”s Center for Dialogues.

Below the fold is a listing of a few of the South Asia-related events coming up over the next fortnight. Don’t let your exploration stop there. There’s tons more on the calendar worth checking out. 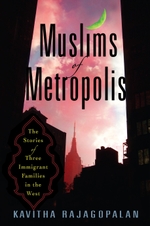 But first, I want to tell you about a book that I’ve been reading which ties in well to the theme of this festival: Kavitha Rajagopalan’s Muslims of Metropolis which was published by Rutgers University Press late last year.

Muslims of Metropolis is a sensitive and thoughtful examination of international migration and the social construct of identity. Rajagopalan spent nearly 7 years researching and writing her first book which tells the stories of the journeys of three families from majority-Muslim countries to three major Western metropolises. In London, she follows a Palestinian man from Jerusalem and his Syrian wife. In Berlin, a Turkish Kurdish community. And, in post 9/11 New York, and a Bangladeshi man and his daughter who married an undocumented Pakistani man.

As Rajagopalan puts it in her introduction:

These families come from different socioeconomic, political, and ethnic backgrounds, but they are all Muslim. It should be noted, however, that this is not a book on theology or Islamic history. Although the stories in this book will refer to the ways in which characters relate to Islam as they construct their identities, cope with adversity, or understand their roles in the world, this is not ultimately a book about Muslims but about immigrants … I have chosen to write about Muslim immigrants because I believe that the social identity of Muslim immigrants stands under the greatest pressure of misunderstanding and mistrust throughout the world.

Over the past several months, Rajagopalan has been touring the country doing multimedia presentations and readings from her book. I attended one reading right here in NYC and was struck by her ability to weave together multiple human narratives with solid research in a manner that was penetrating and insightful, at once literary, journalistic, and accessibly academic.When I met Rajagopalan recently, I asked her whether she had felt slack from any sectors of the non-Muslim communities for writing this book. “Do Hindus ask you why you would choose to write about Muslims?” I asked. A grandchild of partition, I am well aware of the bruises and cuts that sadly still exist among our communities.

“Yes,” was her answer. “There is an expectation among South Asians that we should only write about our own identities; this pressure to be an ambassador instead of a person interested in examining and understanding society and being capable of empathy,” she said.

Kudos to her for breaking those barriers. Indeed, though she’s tackling complicated and specific themes, Rajagopalan’s writing and the structure of the book yield a book that offers insight into the personal experiences and emotional lives of three real families and on a larger level, the universal immigrant experience. Hindu or Muslim, Indian or Bangladeshi or Senegalese, we’re not all so different after all.

“Women, Art and Islam”: This exhibit opens on June 5th at the Museum for African Art. It features five female artists whose major connection is their personal relationship with Islam. Among the artists featured are Fariba Alam (Pakistan) and Mahwish Chisty (Bangladesh). On sale at the opening will Kavitha Rajagopalan’s Muslims of Metropolis.

Dastangoi: The Adventures of Amir Hamza: Magic, sorcery, warriors, and tricksters come together in a theater production of poetry and acting about the trials and triumphs of the Prophet Muhammadâ€™s uncle Amir Hamza. with Naseeruddin Shah

The Frontier Gandhi: Badshah Khan, A Torch For Peace: Documentary about Muslim peacemaker Badshah Khan who managed to raise a nonviolent army of 100,000 men, women, and youngsters as he struggled for Indiaâ€™s independence alongside Gandhi.

4 thoughts on “Muslim Voices in the Metropolis”